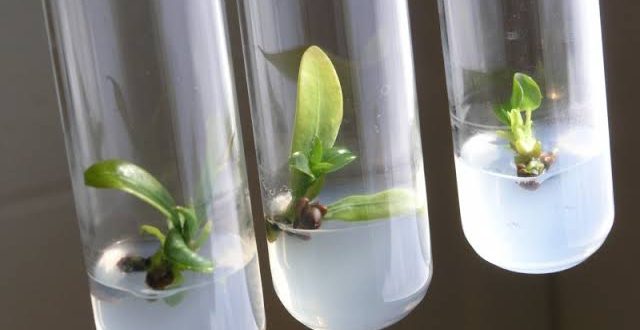 What is embryo culture?

Embryo culture is the sterile isolation and growth of an immature or mature embryo in vitro with the goal of obtaining a viable plant.

Barriers to the production of Distant Hybrids

Some species carry a lethal gene which causes death of the zygote during early embryonic development. Such lethal genes generally don’t have any effect in the species carrying them but affects only in interspecific hybrid embryos e.g.

Aegilo umbellulata has a gene for lethality that has three alleles . This lethal gene is active against the zygote produced by crossing A. umbellulata with diploid (2x) wheat ( T. aestivum) .

Similarly, Crepis tectorum has a lethal gene “I” which causes death of embryos in the early stages of development in certain interspecific crosses.

Laibach( 1952) use of embryo culture technique in inter specific crosses of Linum.

In embryo culture , young embryos are removed from developing seeds and are placed on a suitable nutrient medium to obtain seedlings.

So far, it has not been possible to culture embryos before a certain stage of development, e.g. before the globular stage in case of barley.

Embryo culture is being routinely used in some crop improvement programmes to obtain interspecific hybrids.

It has some other specific uses as well ,  e.g propagation of orchids, overcoming dormancy . 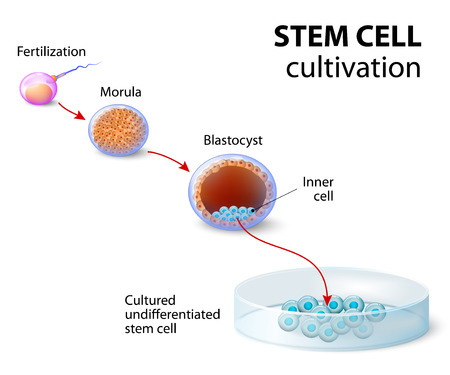 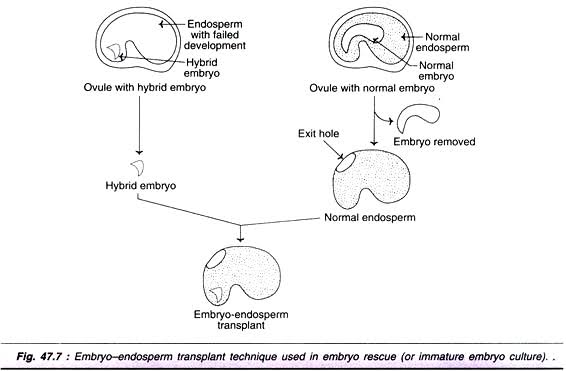 Elimination of the (absolute) inhibition of seed germination:

In a few species it is absolutely impossible to obtain germination in vivo and in these cases embryo culture is essential , e.g Colocasia esculenta, Musa balbisiana and the hybrid of Pinus armandii and P. Koraiensis.

Distant crosses may fail due to one or more several reasons. e.g.

• Inability of pollen to germinate, failure of the pollen tubes to grow or perhaps more commonly due to the degradation of endosperm.

• When embryo fails to develop due to endosperm degeneration, embryo culture is used to recover hybrid plants. Embryo culture has been widely used for this purpose.e.g.

In some cases of distant hybridization, chromosome are gradually eliminated from the zygote.

• Chromosomes elimination has been reported in certain interspecific crosses in Nicotiana and Hordeum and in crosses between Triticum aestivum and Hordeum vulgare.

• When Hordeum vulgare or  T. aestivum are used as male and Hordeum bulbosum is used as female, the embryos obtained from such crosses are generally haploid carrying the haploid genomes of H. vulgare and T. aestivum, respectively.

• In fact this cross was the basis for large scale haploid production programmes in barley.

Some species hybrids die during seedlings development or even after initiation of flowering. Some interspecific hybrids in Meliotus

are cholorophyll deficient and fail to survive, e.g. certain interspecific hybrids of cotton . Such plants may be grown to maturity by grafting them on to normal plants or by growing them in vitro.

• Hybrid seeds obtained using C. olitorius as female with the application of high concentration of IAA at the pedicel of the pollinated flower.

• Embryo culture was needed to recover the hybrid.

Orchids are difficult to propagate since their seeds lack any stored food and the embryo in virtually naked. In many orchids, embryo development is incomplete at the time the seeds mature.Young or mature orchid embryos are removed from seeds and placed on suitable nutrient media. The embryos develop into seedlings either directly or through callus formation.

• There are many species that exhibit seed dormancy which is localised in the seed coat and/ or in the endosperm. By removing these the seeds germinate immediately.

• In some fruit trees, embryos require a period after ripening before germination. Iris seeds may take two or several years to germinate. This period of dormancy can be effectively eliminated by embryo culture . Other example are Prunus , Taxus etc.

sexual incompatibilities have been separated into pre and post fertilization barriers.

• The pre fertilization barrier is usually due to inhibition if pollen tube growth by the stigma or supper style, circumvented by using the cut style technique or in vitro pollination.

Hybrid plantlets can be obtained by growing the immature zygotic hybrid embryos directly into seedlings or propagated as clones of hybrid plantlets.

• Developmental stages of the embryo at isolation

• Growth conditions of the mother plant

• Composition of the nutrient media

Previous Friendly Behaviour Of Bacteria
Next Selaginella: Tale of spikemosses