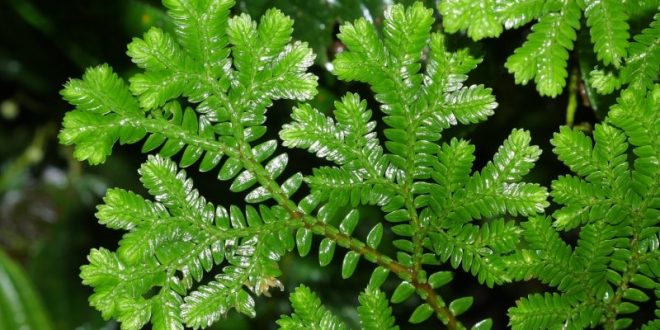 Selaginella sp.  is a sole genus of vascular plant under family Selaginellaceae and order Selaginellales. The member of this order have herbaceous stems that are usually without any indication of a secondary thickening. Commonly known as spike mosses.

Some are xerophytic and grow on rocky cliffs or on soil that periodically becomes dry. This xerophytic species can withstand desiccation for months. Rosette like system of branches coil tightly together as the plants dry out and re-expanding when it is moistened.

Some other commercially available species are-

The stem is typically dichotomous often monopodial, others are climbing or sub erect. Majority are perennial and few are delicate annuals. They vary in length from few centimeters to several meters.

S. kraussiana shows a single layer of epidermal prosenchymatous fibres without any stomatal opening. Below it is the cortex of angular parenchymatous cells usually without intercellular spaces. The outer cortex cells are thickened in some, specially, xerophytic species.

The vascular cylinder in Selaginella species varies from protostelic to siphonostelic and monostelic to polystelic (with 2 to 16 separate steles). But, on the whole the stelar arrangement is simpler than in Lycopodium. S.kraussiana is distelic.

In the stele there is an exarch xylem at the centre, the metaxylem showing stalariform tracheides and a protoxylem lies towards the circumference. The xylem is surrounded by one or two layers of parenchyma which again is surrounded by a single layer of sieve tubes with sieves on lateral walls forming the phloem outside which is the peri-cycle.

On the basis of the position of leaves, this genus is subdivided into two subgenera –

In Heterophyllum the dorsiventral and prostrate plant body is present with distinct heterophylly of leaves including majority of species. In this subgenus the leaves are two types. Two rows of large ventral leaves and two rows of small dorsal leaves.

A t.s. of the leaf  shows a simple organisation.  At the centre there is a simple vascular bundle.  The epidermis is one layer thick and the stomata are usually present on the lower epi­dermis only. The mesophyll is uniformly formed either of all spongy or all pali­sade-like elongated cells full of air spaces. Meso­phyll cells have single cup- shaped or many chloroplastids according to species.

In all cases there are several spindle-shaped, pyrenoid-like bodies at the centre of each chloroplast. The bodies may be trans- through ligule at base of leaf, formed into rudimentary starch grains. The only other Embryophyte with similar chloroplasts is the Anthocerotopsida.

On the upper surface of each leaves near the base a small flap like appendages present called Legule.

In sporophylls legule lies between the sporangium and leaf blade. it becomes prominent and functional during the growth of leaves. In  its maturity  the legule wither away .

The definite function of legule is unknown but its  predicted that it may act as water  absorbing or water secreting body.

At the place of branching of stem or at the prostrate axis arises an elongated  downwardly growing, colorless, leafless cylindrical appendages called rhizophore. Each of which typically develops a tuft of adventitious roots at the free end.

All roots borne by adult plant are adventitious in origin. In a majority of species these are formed only at the distal end of the rhizophores. but in few species like Selaginella wallichii spr adventitious root may develop anywhere along the stem.

Roots of Selaginella sp are delicate sparingly  branched, and with a small stele. Typically this is monarch in organization and has one phloem and one xylem mass. Primary roots are short lived.

Microsporophyll and Megasporophyll  are aggregated in strobilli and  cones at the apex of the stem or lateral branches. in Selaginella patula produces shoot with sporophyll and folliage leaves in alternate zone along the stems.

In S.kraussiana one megaspore remains at the base and the others are microphyllus.

Right from the stage 4 onwards sporangia starts differentiating into two types of spores – microspores and megaspores.

In S. rapestris only one megaspore left behind.

The germination of megagametophyte within megasporangium differs in different species.

In S. kraussiana megagametophyte liberated when the first archegonium is formed.

In S. rapestris  megaspore is retained within the megasporangium untill fertilization has occured or even after embryo is developed.

As the nuclei increase cytoplasm becomes thicker and the vacule becomes filled completely with cytoplasm. formation of wall around the daughter nuclei occurs first at the apical part of the spore and a cushion of cellular tissues is formed.

in some species apical cushion lies in continuation with the rest of the prothallus. but in some species seperated from the rest by diafram bellow within which 3 nuclei occur.  Few archegonial initials make their appearance in the apical tissues. shortly after the spore wall breaks the apical cushion prostrudes. basal non cellular region becomes filled with large cells. these cells act as food reserve. Few rhizoids are given off from the exposed apical regions.

The first division of the zygote is usually transverse. The upper cell gives rise to the one or more celled suspensor and the lower cell to the embryo. The em­bryo initial divides vertically  The two resultant cells again divide vertically to form four cells one of which cuts off the stem initial from its base

Gradually, the embryo organises into sectors on one side of which is the stem between two cotyledons, on the other side is the foot (for sucking food material from the endosperm) occupying a major part of the base and the rhizophore initial on the top of it

This is an official account of this website. This ID holds articles from two categories. 1. Articles from our non-authors. 2. Articles of the authors whose IDs were deleted.
Previous Embryo culture technique: To overcome barriers of distantly related crosses.
Next Porella: The Leafy Liverworts