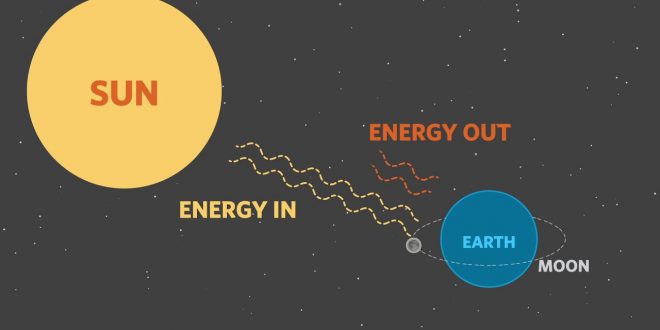 There are various factors that influence the amount of radiation coming from the sun to the earth’s surface.

Amount of radiation coming to the earth surface varies between short wave and long wave radiation.

In case of shortwave Radiation


In case of longwave Radiation

Radiation balance in the northern hemisphere

The passage of solar radiation through the atmosphere

Radiation flux refers to the total amount of radiation energy of all wave lengths (short and long) crossing a unit area of surface per unit time. The radiation flux represents the principal input of energy. It is expressed as Cal cm-2min-1

Radiation flux or the radiation balance (S) may be positive or negative.

It has a positive value during the day when solar radiation is directly available but at night the situation becomes reverse i.e. radiation exceeds the counter radiation.

Sunlight, thermal radiation, conduction and convection all interact with the organism on the surface. This interaction either deliver a net energy to the organism or causes absorption from it. Since energy is neither created nor destroyed and the surface itself has no capacity to store heat, the summation of all the fluxes is always zero

Above equation expresses the various components of energy which reach on the surface of the vegetation.

Energy budget in different climatic zones of the world

The relative contribution of the various components of energy budget varies with geographical location and seasonal variation.

Currently in 4th year (Hons) in the Department of Botany, University of Dhaka. Planned to have multiple careers one by one but promised to be with 'Plantlet' as long as it's primary stage remains unfinished. Email: abulaisshomrat@gmail.com. Minimum monthly resolution - Publish (1), Revise (3), Share (5)
Previous Arsenic: Exposure, Effect & Contamination
Next How to Select Universities to Apply : Higher Studies