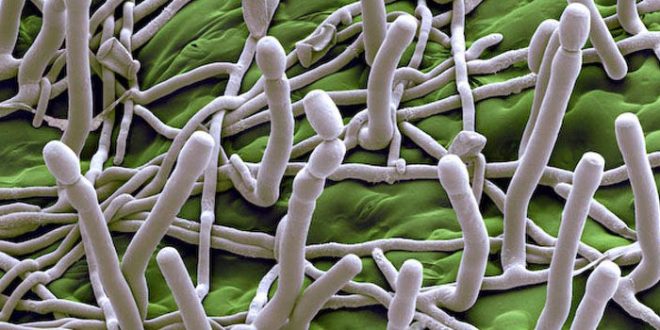 One of the important fungi which influence human life belongs to the order Erysiphales. This fungi causes powdery mildew disease to plants, so named as the infected plant appear to be covered by a white, powdery material. This is none other than due to the powdery conidia, which are blown away easily. Their physiology and importance are discussed as follows-

Their microscopic features are important in identification. they are –

The members of the family Eryspipahceae cause a group of plant diseases commonly known as powdery mildews.

Hyphae: They are branched or unbranched, tend to grow closely appressed to the host surface. Some species produces aerial branches known as setae. Production of thick walled clamydospores are recognized in some species. They are thin walled, septate with each cell usually containing a single prominent nucleus.

Appresoria: Hyphae are anchored to the host by appressoria. They are simple, lobed structures or more complicated multilobed structure. They are produced in sequence along the length of hypha or in alternate or opposite fashion.

Haustoria: several types are recognized based on the light microscopic studies of few species of Erisiphales. They appear to form slender neck region and the body which may be globose, pyriform or lobed. Haustorium is seperated from the cytoplasm of the host cell by by a so called extrahaustorial matrix and extrahaustorial membrane.

The chief source of dissemination of this fungi is conidia, produced in enormous number on vertical 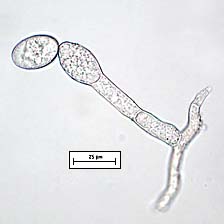 conidiophores. They are hyaline and erect. Most of the species contains conidiophore which are unbranched (except Leveillula).The basal cell is referred to as foot cell while the terminal cell is called either generative cell or conidiogenous cell.

Conidia develop singly or in chains. They remain firmly attached end to end with mature conidia at the distal end of the chain and immature conidia at the proximal end (basipetal development). They are one celled and appear hyaline when viewed with light microscopy. Each is thin walled, uninucleate and highly vacuolate. Structure known as fibrosin body is noted. 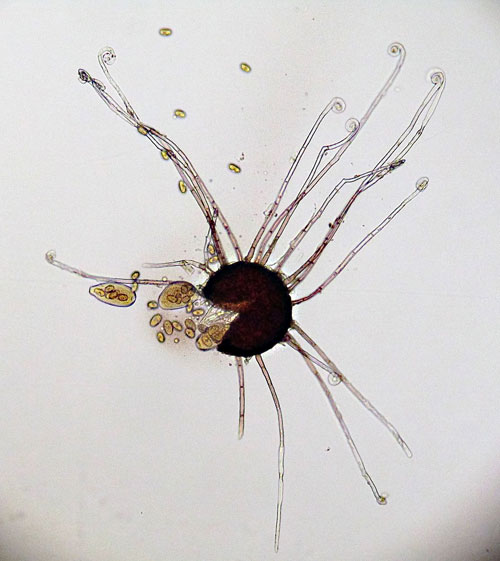 placed hyphae, which in the beginning are similar but later becomes differentiated. The antheridium is slender while ascogonium is curved and swollen. Both are uninucleate and separated from the hypha by a septum. Lower cell is called stalk cell.

The development of ascocarp is not yet resolved. There is a controversy as to where the sexual nuclei originates from. One school of thought regarded the two hyphal branches that coil around one another as functional gametangia with antheridial nucleus passing into the ascogonium rendering it binucleate. Another school of thought states it is the division of female nuclei into dikaryon and this dikaryon further divides to form 4 cells. They are separated into 3 cells with the middle having  binuleate cell. At maturity of the cell, cleistothecium is developed, where the asci contains 1 to 8 ascospores. The external ennvironment induces the splitting of ascocarp thus spore is rereased.

Classification on the basis of cleistothecial appendages

There are four kinds of appendages present in a cleistothecium.

Currently in 4th year (Hons) in the Department of Botany, University of Dhaka. Planned to have multiple careers one by one but promised to be with 'Plantlet' as long as it's primary stage remains unfinished. Email: abulaisshomrat@gmail.com. Minimum monthly resolution - Publish (1), Revise (3), Share (5)
Previous Eurotiales: Perfect & Imperfect Stages of Aspergilli & Penicilli
Next Clavicipitales: Ergot by Claviceps Purpurea