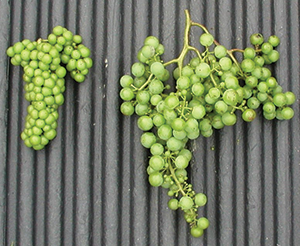 Gibberellins (GAs) are plant hormones that regulate various developmental processes, including stem elongation, germination, dormancy, flowering, flower development, and leaf and fruit senescence.1 They are one of the longest known plant hormones.

A key part of the Green Revolution during the 1960s, which saw crop yields more than double, was the development of new dwarf varieties, many of which were later found to have mutations in the GA pathway. (Know more)

Found in gymnosperms, angiosperms, ferns, probably mosses also. Available in very few species of fungi and bacteria. They have non-polar transport system (without diffusion transport) through xylem and phloem. They also require energy for transport.

There are currently 136 gibberellins identified from different organisms and named as GA1, GA2, GA3 and so on based on their serial of discovery. Here, the most common one is GA3 called Gibberellic acid which is the most commercially produced and widely used by scientists.

Cytokinins (CK) are a class of phytohormones that promote cell division, or cytokinesis, in plant roots and shoots. They are involved primarily in cell growth and differentiation, but also affect apical dominance, axillary bud growth, and leaf senescence.

Found in almost all higher plants as well as mosses, fungi and bacteria and also in tRNA of many prokaryotes and eukaryotes.

Currently in 4th year (Hons) in the Department of Botany, University of Dhaka. Planned to have multiple careers one by one but promised to be with 'Plantlet' as long as it's primary stage remains unfinished. Email: abulaisshomrat@gmail.com. Minimum monthly resolution - Publish (1), Revise (3), Share (5)
Previous Theory of Abiogenesis and Biogenesis
Next পরীক্ষার আগের রাতে পড়ার ট্রেন্ড