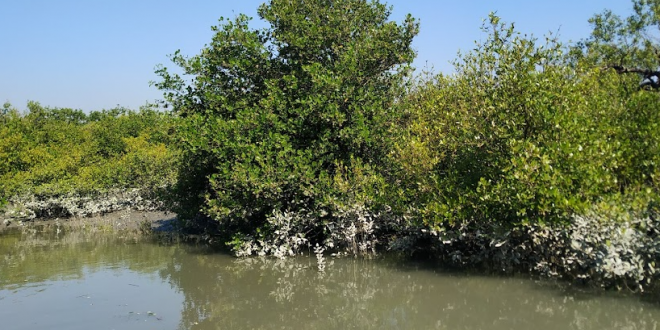 Plants which grow and complete their life cycle in habitats with a high salt content are called salt plants or halophytes. Usually that term is reserved only for plants which appear in salty habitats constantly and specifically. Plants occupying only local nonsalty ecological niches in an overall saline environment, or those which appear in such habitats only for short periods, i.e., during the rainy season, are called pseudohalophytes or false halophytes.

The fact that only a small group of higher plants can grow under saline conditions was recognized many years ago. In 1563, Dodoens described Plantago maritima as belonging to such a specific group. In 1576, Lobelius mentioned Salicomia as a typical plant of sea coasts. In 1695, Sloane emphasized the fact that Avicennia is a species of saline habitats and is exceptional in this respect.

Nevertheless, only early in the nineteenth century was the name “halophyte” given to that group of plants by Pallas (see Schrader, 1809).

1. The name ‘mangrove’ has been originated in circa. 1610s from mangrow, which in turn originated probably from Spanish mangle, mangue (1530s), which is perhaps from a word in Carib or Arawakan, native languages of the West Indies. So, the name has an West Indian origin.

2. Variations in salt tolerance are also found within the angiosperms. Some families have species with a high salt tolerance, e.g., Potamogetonaceae, Hydrocharitaceae, Chenopodiaceae, Zygophyllaceae, Tamaricaceae, Frankeniaceae, Rhizophoraceae, Plumbaginaceae, and the Verbenaceae. Plants of various other families of the angiosperms, e.g., Orchidaceae, Araceae, Rosaceae, and Ericaceae, are known to be salt sensitive.

Mangroves do not represent a uniform taxonomic group, and include at least twelve genera in eight different families.

Other species, e.g., Scyphiphora hydrophyllacea, Scyphiphora malayana of the Rubiaceae, Acanthus ilicifolius of the Acanthaceae, Hibiscus tiliaceus of the Malvaceae, and others, can also be considered as mangrove species. However, their distribution is very limited.

Usually salines are characterized by high NaCl content and high osmotic potentials. Many salines are also affected by high concentrations of sulfates, carbonates, and bicarbonates, and by high pH of the soil, as well as by poor soil structure and disturbed aeration. These factors have an apparent adverse effect on the nutrition, growth, and reproduction of most plants.

Since halophytes can not easily absorb water, the halophytes develop in them almost all important xerophytic devices for water economy.

Majority of halophytes in the tropical and subtropical regions are shrubs (dome shaped), but a few of them are herbaceous. e.g. Acanthus ilicifolius.

(i) Pneumatophores: The soil in coastal region is poorly aerated and it contains very small percentage of oxygen because of water logging. In order to compensate this lack of soil aeration, the hydro halophytes develop negatively geotropic roots, called pneumatophores (breathing roots).

(ii) Stilt roots: In addition to normal roots, many stilt or prop roots are developed from the aerial branches of stem for efficient anchorage in muddy or loose sandy soil. e.g., Rhizophora mucronata (stilt roots).

(b) Stem: Some halophytes develop succulence in stem. Succulence depends on the ratio of absorbed to free ions in the plant cells rather than absolute amounts of sodium chloride or sulphate present. Some studies say that succulence is directly correlated with salt tolerance of plants. e.g. Salicornia herbacia and Suaeda maritima.

(c) Leaves: The leaves of the most the halophytes are thick, entire, succulent, generally small-sized, and are often glassy in appearance. Some species are aphyllous. Stems and leaves of coastal aero-halophytes show additional mode of adaptation to their habitats. Their surfaces are densely covered with trichomes. Leaves of submerged marine halophytes are thin and have very poorly developed vascular system and frequently green epidermis. They are adapted to absorb water and nutrients from the medium directly.

(d) Fruits, Seeds and their dispersal: The fruits and seeds are generally light in weight. Fruit walls have a number of air chambers and the fruits, seeds, and seedlings which can float on the water surface for pretty long time are dispersed to distant places by water current. Mangrove vegetations of tropical sea-shores from Australia to East Africa include approximately the same species of plants. Similarly, the mangroves of West Asia show considerable resemblances with those of East Asia and East Africa.

(e) Viviparous mode of seed germination: Halophytes or mangrove plants growing in the tidal marshes show ‘vivipary’ which is defined as the germination of seeds while the fruits are still attached to mother plants (e.g. Rhizophora sp. Aegiceras sp., Avicennia sp.).

The developing embryo, receiving water and nutrients from the mother plant, grows uninterruptedly from fertilization until it is shed (Pannier, 1962). The so-called germination thus starts when the seed is still attached to the mother plant.

Since growth of the embryos is not interrupted by periods of quiescence or dormancy, it is difficult and misleading to speak of “germination” in such a case of viviparous species.

Watch the following video to have a grasp on the life cycle of Red mangrove (Rhizophora mangle). It includes a good details on viviparous germination of this mangrove tree.

Cell size & surface area: Plants grown in a medium containing NaCl have leaves with small surface area but with large cells. In contrast, plants affected by Na2S04 have small leaf cells but large leaves. Why so? Because sulfate influences cell division more than cell expansion (Strogonov, 1964), whereas chloride affects expansion more than division.

(i) Presence of thick cuticle on the aerial parts of the plant body. The epidermis is characterised by a cover of waxy layers in addition to thick cuticle

(ii) They develop protected stomata which are not deeply sunken. The palisade consists of several layers with intercalated tannin and oil cells

Steiner (1935) classified halophytes according to their response to internal salt content. According to him, salt marsh plants can be classified into three types:

1. Succulent halophytes: Plants which can tolerate high concentrations of chloride in their cell sap due to an increase in succulence. They retain water as survival mechanism, especially in their leaves. e.g. Salicornia herbacea.

Another classification can be produced based on the contact between the salt and the halophytic plant as the contact may involve different tissues of the plant body.

1. Terrestrial halophytes: In terrestrial habitats, contact occurs between the plant roots and the saline soil.

Last, but not the least

Understanding the basic processes of adaptation to salinity and the “know-how” of applying such principles to crop plants would be, in the near future, a matter of “life or death” to the growing population of a world 95% of whose water sources are saline. The earlier we comprehend such a need, the wiser we shall be. (Yoav Waisel, 1972)

Currently in 4th year (Hons) in the Department of Botany, University of Dhaka. Planned to have multiple careers one by one but promised to be with 'Plantlet' as long as it's primary stage remains unfinished. Email: abulaisshomrat@gmail.com. Minimum monthly resolution - Publish (1), Revise (3), Share (5)
Previous Salinity: Sources, Cycles & Classification
Next DNA Reassociation Kinetics & Sequence Complexity

Found some interesting parts. Nice to read 💙. Thanks for sharing 💖