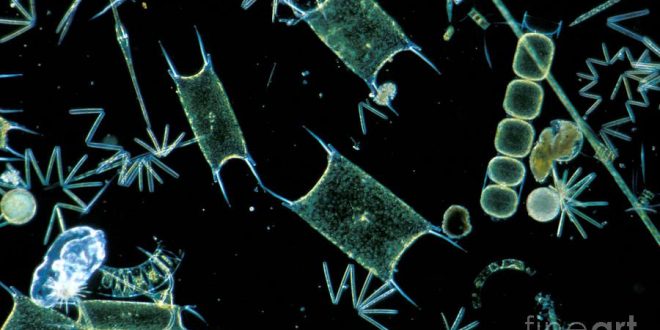 The word ‘plankton’ has been derived from a Gr. word ‘planktos’ means drifting. So, plankton are those microscopic aquatic organisms or drifters whose movement is mainly driven by water current, wave, tide, etc. Although, some of them might possess some kinds of locomotory organs but those are not sufficiently strong to overcome the water current.

So scientifically, plankton are those microscopic or sub-microscopic suspended organisms of water who do not have any locomotion of their own or if they would have any flagella or cilia attached to them that is not sufficiently strong enough to overcome the strength of water movement, current or wave actions. It means the movement of plankton is mainly regulated by the motion of water.

Some organisms are only classified as plankton when they are young, but they eventually grow large enough to swim against the currents.

What Does Plankton Include?

There are about 5000 marine phytoplankton consisting of diatoms, dinoflagellates, cyanobacteria and eustigmatophytes (in a decreasing order). Though they are microscopic in size, they are considered as the “Pasturage of the sea” because of their abundance and the huge role they play in marine food web.

They maintain O2 and N2 balance of the atmosphere (about 80% supplied by phytoplankton). They occasionally form bloom, release toxins, affecting marine lives.

Phytoplankton are the autotrophic components of the plankton community and a key part of oceans, seas, and freshwater ecosystems.

Phytoplanktons are classified depending on

Based on life cycle

A) Based on the nature of the habitat

B) Based on the zones where they occur

Phytoplankton obtain their energy through photosynthesis. This means phytoplankton must have light from the sun to produce food. So, they afloat in the well-lit surface layers (called euphotic zone) of oceans and lakes to carry out primary production.

Plankton are usually heavier than water. This is important because if a planktonic (phyto- or zoo-) organism just floated on the surface of the water, it might not be able to get food sources below it or it might get too warm or too much light from the sun (even phytoplankton can be “bleached” by the sun!).

In evolutionary processes, special adaptive structures developed in their body so that these organisms are better able to cope with the problems of their dynamic habitat.

Plankters (with its protoplasm and skeleton the specific gravity is > 2.00) are heavier than the water (1.00 specific gravity) and will sink if there is no means to work against gravitational force.

However, for floatation phytoplankton are variously modified as follows:

b. Appendages: Presence of special structures may help phytoplankters to keep them in proper position in the water and to retard sinking, e.g. the frustules of Chaetoceros produce long chaetae, Corethron, Golenkinia with bristles, Dictyocha with spines and Ceratium with horns.

e. Oil droplets: Certain plankters deposit oil as reserved food. The oil reduces the specific gravity to such on extent that the organisms become lighter than the water and hence help to float at or near the surface, e.g. diatoms and dinoflagellates.

Currently in 4th year (Hons) in the Department of Botany, University of Dhaka. Planned to have multiple careers one by one but promised to be with 'Plantlet' as long as it's primary stage remains unfinished. Email: abulaisshomrat@gmail.com. Minimum monthly resolution - Publish (1), Revise (3), Share (5)
Previous Marine Botany: Oceans, Seas & Bay of Bengal
Next Marine Phytoplankton: Productivity, Food Chain, Physical & Chemical Factors.