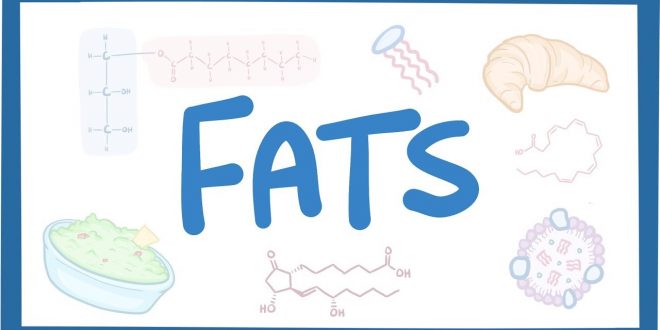 In biology and biochemistry, a lipid is a macro-biomolecule that is soluble in nonpolar solvents. Non-polar solvents are typically hydrocarbons used to dissolve other naturally occurring hydrocarbon lipid molecules that do not (or do not easily) dissolve in water, including fatty acids, waxes, sterols, fat-soluble vitamins (such as vitamins A, D, E, and K), monoglycerides, diglycerides, triglycerides, and phospholipids.

It is difficult to define precisely what we mean by a ‘lipid’ because lipids are a very varied group of chemicals. They are all organic molecules which are insoluble in water. The most familiar lipids are fats and oils. Fats are solid at room temperature and oils are liquid at room temperature – chemically they are very similar. We could say that true lipids are esters formed by fatty acids combining with an alcohol.

Fatty acids are a series of acids, some of which are found in fats (lipids). They contain the acidic group –COOH, known as a carboxyl group. The larger molecules in the series have long hydrocarbon tails attached to the acid ‘head’ of the molecule (Figure A). As the name suggests, the hydrocarbon tails consist of a chain of carbon atoms combined with hydrogen. The chain is often 15 or 17 carbon atoms long.

Alcohols are a series of organic molecules which contain a hydroxyl group, –OH, attached to a carbon atom. Glycerol is an alcohol with three hydroxyl groups (Figure B).

The –COOH group on the acid reacts with the –OH group on the alcohol to form the ester bond , –COO− . This is a condensation reaction because water is formed as a product. The resulting ester can be converted back to acid and alcohol by the reverse reaction of adding water, a reaction known as hydrolysis.

The most common lipids are triglycerides (Figure C). These are fats and oils. A glyceride is an ester formed by a fatty acid combining with the alcohol glycerol. As we have seen, glycerol has three hydroxyl groups. Each one is able to undergo a condensation reaction with a fatty acid. When a triglyceride is made, as shown in Figure B, the final molecule contains three fatty acids tails and three ester bonds (‘tri’ means three). The tails can vary in length, depending on the fatty acids used.

Triglycerides are insoluble in water but are soluble in certain organic solvents, including ether, chloroform and ethanol. This is because of the non-polar nature of the hydrocarbon tails: they have no uneven distribution of electrical charge. Consequently, they will not mix freely with water molecules and are described as hydrophobic (water-hating). Figure C shows a simplified diagram of a triglyceride.

Lipids make excellent energy reserves because they are even richer in carbon–hydrogen bonds than carbohydrates. A given mass of lipid will therefore yield more energy on oxidation than the same mass of carbohydrate (it has a higher calorific value), an important advantage for a storage product.

Fat is stored in a number of places in the human body, particularly just below the dermis of the skin and around the kidneys. Below the skin it also acts as an insulator against loss of heat. Blubber, a lipid found in sea mammals like whales, has a similar function, as well as providing buoyancy. An unusual role for lipids is as a metabolic source of water. When oxidized in respiration they are converted to carbon dioxide and water. The water may be of importance in very dry habitats. For example, the desert kangaroo rat (Figure D) never drinks water and survives on metabolic water from its fat intake.

Phospholipids are a special type of lipid. Each molecule has the unusual property of having one end which is soluble in water. This is because one of the three fatty acid molecules is replaced by a phosphate group, which is polar and can therefore dissolve in water. The phosphate group is hydrophilic (water-loving) and makes the head of a phospholipid molecule hydrophilic, although the two remaining tails are still hydrophobic (Figure E).

This allows the molecules to form a membrane around a cell, where the hydrophilic heads lie in the watery solutions on the outside of the membrane, and the hydrophobic tails form a layer that is impermeable to hydrophilic substances.

Lipids are insoluble in water, but soluble in ethanol (alcohol). This fact is made use of in the emulsion test for lipids.

Lipids are a diverse group of chemicals, the most common of which are triglycerides (fats and oils). Triglycerides are made by condensation between three fatty acid molecules and glycerol. They are hydrophobic and do not mix with water, acting as energy storage compounds in animals, as well as having other functions such as insulation and buoyancy in marine mammals. Phospholipids have a hydrophilic phosphate head and two hydrophobic fatty acid tails. This is important in the formation of membranes. The emulsion test can be used to test for lipids.

A Biology maniac who is interested in fundamental research attempt to explore and explain the underlying mechanisms that govern the functioning of living matter............ E-mail: abchowdhuryy@gmail.com. Minimum monthly resolution: Publish (1), Revise(3), Share (5).
Previous Tricks for GRE Preparation
Next Protein and Peptides: An Inevitable Source of Nutrition (Part 1)