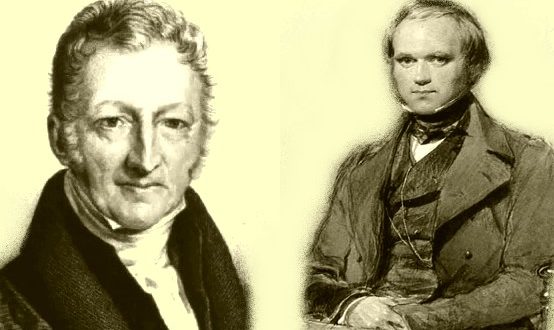 Five years with nature aboard, the Beagle destroyed Darwin’s faith in the fixity of species. In July, 1837, shortly after the voyage, he started his first notebook on “transmutation.” Already convinced that evolution had occurred, Darwin sought a theory to explain its mechanism. After much preliminary speculation and a few unsuccessful hypotheses, he achieved his central insight while reading an apparently unrelated work for recreation. Darwin later wrote in his autobiography:

In October 1838 … I happened to read for amusement Malthus on Population, and being well prepared to appreciate the struggle for existence which everywhere goes on from long continued observation of the habits of animals and plants, it at once struck me that under these circumstances favorable variations would tend to be preserved and unfavorable ones to be destroyed. The result of this would be the formation of new species.

Darwin had long appreciated the importance of artificial selection practiced by animal breeders. But until Malthus’s vision of struggle and crowding catalyzed his thoughts, he had not been able to identify an agent for natural selection. If all creatures produced far more offspring than could possibly survive, then natural selection would direct evolution under the simple assumption that survivors, on the average, are better adapted to prevailing conditions of life.

Darwin read “for amusement” Thomas Robert Malthus’s (1766–1834) ”An Essay on the Principle of Population”, originally published in 1798 and by 1838 in its sixth edition. In this work Malthus, a clergyman and professor of history and political economy at East India Company College, Hertfordshire, England, put forward his “law” of population:

Written in the immediate wake of the French Revolution, Malthus’s essay attempted to show that shortage of resources was not a function of economic and social policies but was inherent in population dynamics.

As a naturalist, Darwin immediately after reading Malthus’s work recognized that in any species, far more offspring are born than survive to reproductive maturity, thus generating a Malthusian “struggle for existence.” The slight

variations among members of the same species might give one individual an advantage over another in gaining food or a mate, or avoiding a predator. Those individuals with slight advantages would be expected, on average, to reproduce a little more successfully than others and thus leave more offspring (and vice versa for those individuals with less favorable variations).

Assuming, as Darwin did, that many of these variations are inherited, the characteristics of the population would gradually change over time, leading eventually to formation of a new species. Darwin prepared two privately circulated essays, in 1842 and 1844, outlining his overall theory. His hesitancy to publish may have resulted from fear of negative reactions from both scientific colleagues and the public, especially his wife and the church.

Currently in 4th year (Hons) in the Department of Botany, University of Dhaka. Planned to have multiple careers one by one but promised to be with 'Plantlet' as long as it's primary stage remains unfinished. Email: abulaisshomrat@gmail.com. Minimum monthly resolution - Publish (1), Revise (3), Share (5)
Previous ATP Synthase: World’s Smallest Motor
Next Pollination: Introduction, Types and Conditions