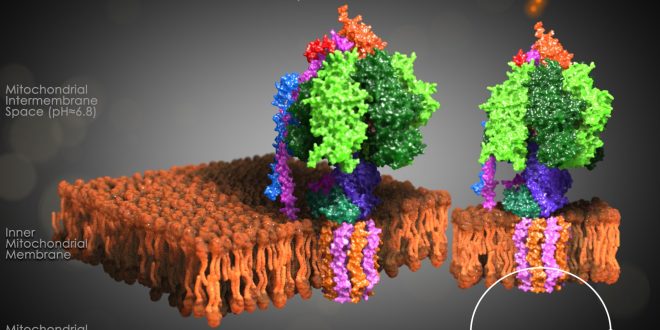 Ever wondered that your very own body might contain a motor like the one we use to run any machine? And it is not just any motor, but a motor recorded to be the world’s smallest one. This motor is commonly known as ATP synthase. Every one of the 50 trillion or so of our living cells contains thousands of ATP synthase molecules. Each one rotates about 20 times per second, building three ATP molecules per rotation, keeping us alive. But do we know what this most miniature motor inside our body looks like and how it even functions?


What is ATP synthase

ATP synthase is an enzyme, which is basically a protein. It catalyzes the generation of ATP from ADP and inorganic phosphate through oxidative phosphorylation or photophosphorylation. ATP synthase also works in cellular respiration. There it works to break the ATP, hence, produces energy. It is classified under ligases. ATP synthase is also known as ATPase, F1F0ATPase, complex V. The name complex V declares its fifth position among five complexes in mitochondria.

It consists of two protein regions: the F1 sector and the F0 sector. F1 is the soluble portion situated in the mitochondrial matrix. F0 portion remains embedded in a phospholipid bilayer membrane. F1, known as a stator, consists of three α subunits, three β subunits, and one each of the γ, δ, and ε subunits. F0 region, also known as a rotor, consists of a subunit c-ring, one copy of each subunit a, b, d, F6, and the oligomycin sensitivity-conferring protein (OSCP). F0 causes rotation of F1. The F0 and F1 are connected at two points:

The F1 region is hydrophilic and responsible for hydrolyzing ATP. It is 9 nm in diameter and can be seen in the transmission electron microscope by negative staining. This region extends into the mitochondrial matrix space. The subunits α and β make a hexamer ( a molecule made up of six structural subunits). They have six binding sites. Three of them are catalytically inactive, and they bind ADP. The other three catalyze ATP synthesis. The three catalytic sites are found mainly on the three β units.

The other F1 subunits γ, δ, and ε, are part of the rotational motor mechanism. The γ and ε organize to form the central stalk that runs through the hexameric ring cavity. This γε stalk will interact with the hexamer ring. As the stalk rotates, it stimulates the synthesis and release of ATP. The δ subunit helps hold the α3β3 hexamer ring and prevents it from spinning.

F0 region is hydrophobic, and it has eight subunits and a transmembrane ring. The ring has a tetramer shape with a helix loop. This region is mainly a proton pore that remains embedded in the membrane. It consists of three main subunits, a, b, and c. 10-14 of the c subunits make up the rotor ring that acts as a proton channel. Subunit a binds to the outside of the c-ring structure and helps connect the F0 region to the F1 region. It also plays a role in proton transport. Subunit b makes up a stalk connecting to F1 OSCP that prevents the αβ hexamer from rotating. Humans have six additional subunits d, e, f, g, F6, and 8.

The a-subunit of the F0 region consists of two hydrophilic half-channel. These half channels do not span the entire membrane. One of these half channels opens to the matrix, and the other open to the intermembrane side.

The a-subunit is located in such a position so that it can interact with the c subunits. An aspartate residue at the centre of each c-subunit can readily bind an H+ ion under acidic conditions. Aspartate is a hydrophilic molecule. After receiving the H+ ion, aspartate becomes aspartic acid. Aspartic acid is hydrophobic. As a result, it rotates to the hydrophobic region plasma membrane.

α3β3 hexamer ring of ATP synthase is responsible for

Steps 1 and 2 occur in the absence or presence of the proton electrochemical gradient, which is responsible for the rotation. They can work regardless of whether or not the F0 region is present within ATP synthase. But will not be able to release the synthesized ATP molecule. There has to be a proton electrochemical gradient between the two sides of the inner membrane of mitochondria. Only when the F0 region or c ring rotates, the γ subunit will rotate. α subunits don’t play a catalytic role. Even though α subunits can bind ATP molecules, they will neither release ATP nor will participate in any useful reactions.

At any given moment, β subunits can exist in one of three distinct states. Any two β subunits will never exist in the same state. The states are:

I'm a student of department of botany at University of Dhaka. I'm learning a lot of new interesting things about different spheres of botany and I'll keep updating about them to keep your knowledge of nature enriched. Email: tarannum28@gmail.com Minimum monthly resolution: Publish(3), Revise(2), Share(5)
Previous Endoplasmic Reticulum: Discovery, Structure, & Function
Next Malthus’ Law & How It Catalyzed Darwin’s Thought

You are really extraordinary in organizing topics. Though there were lot of informations, I loved the way of approach.

*The part under heading ‘F0 region’ is not giving a good view experience in mobile. Have a look on this.

Thanks a lot for your compliment. This means a lot to me. I have tried to fix the problem. Hope it is ok now.

A lot of interest grown in my mind about the topic after read this. Thanks for sharing with us💙.

Really glad to hear that. You are most welcome.

My concept has become obvious on this topic after reading this article.

That was a huge compliment for my article. Thanks! Describing a vast topic in a short article is a tough job.