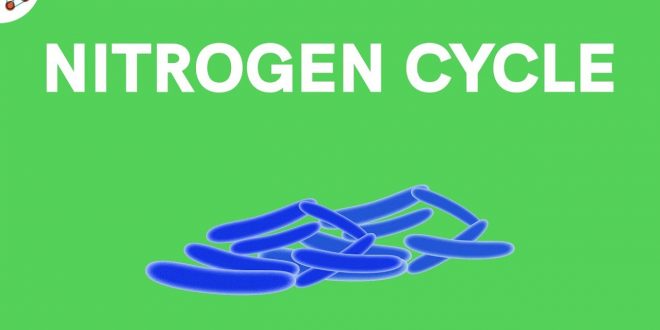 The nitrogen cycle is the biogeochemical cycle by which nitrogen is converted into multiple chemical forms as it circulates among the atmosphere, terrestrial, and marine ecosystems. The conversion of nitrogen can be carried out through both biological and physical processes. Important processes in the nitrogen cycle include fixation, ammonification, nitrification, and denitrification. 1

Nitrogen, which has stable valence states ranging from -3, as in ammonia (NH₃) to +5, as in nitrate (NO3-), occurs in numerous oxidation states. Nitrogen is a constituent of amino acids, nucleic acids, amino sugars, and their polymers. A large, slowly cycled reservoir for nitrogen (3.8 x 1015 metric tons) is the nitrogen gas of the atmosphere (79%). Large but essentially unavailable reservoirs of nitrogen are present in igneous (1.4 x 1016 metric tons) and sedimentary (4.0 x 1015 metric tons) rock as bound, non exchangeable ammonia. Physiochemical and biological weathering releases ammonia from the reservoirs so slowly that it has little influence on early cycling.

Plants, animals, and most microorganisms require combined forms of nitrogen for incorporation into cellular biomass, but the little ability to fix atmospheric nitrogen is restricted to a limited number of bacteria, archaea, and symbiotic associations. The biogeochemical cycling of the element nitrogen is highly dependent on the activities of microorganisms.

The release of ammonia from a simple nitrogenous organic compound, urea, can be described as follows.

In nitrification, ammonia or ammonium ions are oxidized to nitrite ions (first equation) and then to nitrate ions (next equation).

Denitrifying bacteria such as Paracoccus denitrificans, ThiobacilLus denitrificans, various Pseudomonads, Bacillus etc. converting NO3– through NO2 to nitric oxide (NO), and nitrous oxide (N2O) to molecular nitrogen. The denitrification sequence is as follows:

Currently in 4th year (Hons) in the Department of Botany, University of Dhaka. Planned to have multiple careers one by one but promised to be with 'Plantlet' as long as it's primary stage remains unfinished. Email: abulaisshomrat@gmail.com. Minimum monthly resolution - Publish (1), Revise (3), Share (5)
Previous Rhizosphere & Its Effects
Next Nitrogen Fixation & Root Nodule Formation