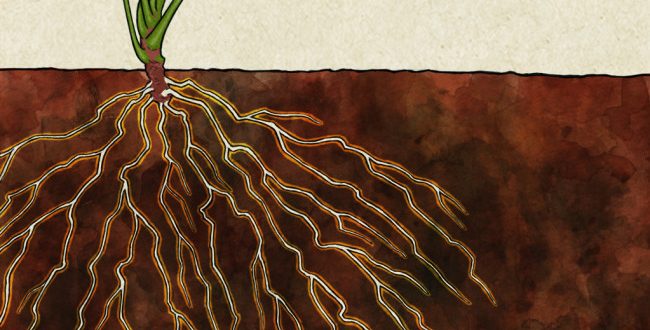 It is the actual surface of the plant root. The rhizoplane is the site of water and nutrient uptake and the release of exudates into the soil.

The rhizosphere depends on a particular plant root structure. The fibrous root structure of grassy plants provides a larger surface area than root systems characterized by a taproot.

Soil that is not part of the rhizosphere is known as bulk soil. The rhizosphere contains many bacteria that feed on sloughed-off plant cells, termed rhizodeposition, and the proteins and sugars released by roots. Protozoa and nematodes that graze on bacteria are also more abundant in the rhizosphere. Thus, much of the nutrient cycling and disease suppression needed by plants occurs immediately adjacent to roots.

Microorganisms are able to perform an extremely wide range of chemical transformations, including degradation of organic matter, disease suppression, nutrient transformations inside roots. Microorganisms have marked influence on the growth of plants. In the absence of appropriate microbial populations in the rhizosphere, plant growth may be impaired.

Following are the major effects of microbial populations on plants.

Plants secrete many compounds into the rhizosphere which serve different functions. Strigolactones (a plant hormone), secreted and detected by mycorrhizal fungi, stimulate the germination of spores and initiate changes in the mycorrhiza that allow it to colonize the root. Symbiotic nitrogen-fixing bacteria, such as the Rhizobium species, attracted by t lectins (plant proteins), tryptophan will lead to the formation of root nodules.

Non-symbiotic (or ‘free-living’) nitrogen-fixing bacteria may reside in the rhizosphere just outside the roots of certain plants (including many kinds of grass), and singularly “fix” nitrogen gas in the nutrient-rich rhizosphere. Even though these organisms are thought to be only loosely associated with the plants they inhabit, they may respond very strongly to the stages of the plants.

Generally, R/S ratio ranges from 5 to 20, but it is common to find an R/S ratio of 100, that is, microbial populations 100 times higher in the rhizosphere than in the surrounding root-free soil. The actual extent of the rhizosphere effect depends on the particular plant and its physiological maturity,

Currently in 4th year (Hons) in the Department of Botany, University of Dhaka. Planned to have multiple careers one by one but promised to be with 'Plantlet' as long as it's primary stage remains unfinished. Email: abulaisshomrat@gmail.com. Minimum monthly resolution - Publish (1), Revise (3), Share (5)
Previous Interactions among Microbial Populations
Next Nitrogen Cycle: Converting Nitrogen into Multiple Chemical Forms