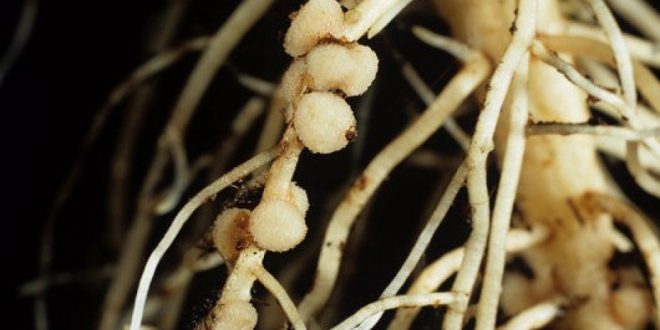 Nitrogen fixation is essential to life because fixed inorganic nitrogen compounds are required for the biosynthesis of all nitrogen-containing organic compounds in organism’s body, such as amino acids and proteins, nucleoside triphosphates and nucleic acids (DNA & RNA).

Nitrogen fixation is carried out naturally in soil by microorganisms termed diazotrophs that include bacteria such as Azotobacter and archaea. Some nitrogen-fixing bacteria have symbiotic relationships with plant groups, especially legumes or bean plants.

The nitrogen in the atmosphere is fixed by nitrogenase enzyme produced by the bacteria. But these enzymes are very oxygen sensitive. They require an oxygen free environment (anaerobic) to function. But again, the bacteria responsible for nitrogen fixation are aerobic. This paradox is solved by nodule formation.

Microorganisms that pass independent life and fix atmospheric nitrogen are known as free-living diazotrophs. There are two groups of such microorganisms: bacteria and cyanobacteria (blue-green algae). Based on the mode of nutrition (carbon, nitrogen and oxygen and requirement of reducing groups) bacteria are divided into:

Nitrogenase is the enzyme complex responsible for nitrogen fixation. This has been characterized as two components, and neither is active without the other.

Nitrogenase is extremely sensitive to oxygen, requiring low oxygen tension for activity. This fixation of nitrogen needs not only nitrogenase, but also ATP, reduced ferredoxin.

(also leghaemoglobin or legoglobin) is a nitrogen or oxygen carrier, because naturally occurring oxygen and nitrogen interact similarly with this protein, and a hemoprotein found in the nitrogen-fixing root nodules of leguminous plants. It is produced by legumes in response to the roots being infected by nitrogen-fixing bacteria, termed Rhizobia, as part of the symbiotic interaction between plant and bacterium; roots uninfected with Rhizobium do not synthesize leghemoglobin.

Leghemoglobin has close chemical and structural similarities to hemoglobin, and, like hemoglobin, is red in color.

In plants infected with Rhizobium, (such as alfalfa or soybeans), the presence of oxygen in the root nodules would reduce the activity of the oxygen-sensitive nitrogenase – an enzyme responsible for the fixation of atmospheric nitrogen. Leghemoglobin buffers the concentration of free oxygen in the cytoplasm of infected plant cells to ensure the proper function of root nodules.

Leghemoglobin has a high affinity for oxygen, about ten times higher than the chain of human hemoglobin. This allows an oxygen concentration that is low enough to allow nitrogenase to function but high enough so that it can provide the bacteria with oxygen for respiration.

Although leghemoglobin was once thought to provide a buffer for nodule oxygen, recent studies indicate that it stores only enough oxygen to support nodule respiration for a few seconds. Its function is to help provide oxygen to the respiring symbiotic bacterial cells in a manner analogous to hemoglobin transporting oxygen to respiring tissues in animals.

Azotobacter, for example, is a genus of free living bacteria that converts atmospheric nitrogen into ammonium, making it available for plant use. This process may only take place, however, if the following conditions are met:

Currently in 4th year (Hons) in the Department of Botany, University of Dhaka. Planned to have multiple careers one by one but promised to be with 'Plantlet' as long as it's primary stage remains unfinished. Email: abulaisshomrat@gmail.com. Minimum monthly resolution - Publish (1), Revise (3), Share (5)
Previous Nitrogen Cycle: Converting Nitrogen into Multiple Chemical Forms
Next Winogradsky Column