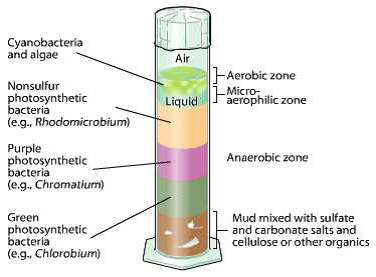 The Winogradsky column is a simple device for culturing a large diversity of microorganisms. Invented in the 1880s by Sergei Winogradsky, the device is a column of pond mud and water mixed with a carbon source such as newspaper (containing cellulose), blackened marshmallows or egg-shells (containing calcium carbonate), and a sulfur source such as gypsum (calcium sulfate) or egg yolk.

Incubating the column in sunlight for months results in an aerobic/anaerobic gradient as well as a sulfide gradient. These two gradients promote the growth of different microorganisms such as Clostridium, Desulfovibrio, Chlorobium, Chromatium, Rhodomicrobium, and Beggiato, as well as many other species of bacteria, cyanobacteria, and algae.

The column provides numerous gradients, depending on additive nutrients, from which the variety of aforementioned organisms can grow. The aerobic water phase and anaerobic mud or soil phase are one such distinction.

How to make a Winogradsky column?

The column is a rough mixture of ingredients – exact measurements are not critical.

After the column is sealed tightly,

While the Winogradsky column is an excellent tool to see whole communities of bacteria, it does not allow one to see the densities or individual bacterial colonies. It also takes a long time to complete its cycle. However, its importance in environmental microbiology should not be overlooked and it is still an excellent tool to determine the major bacterial communities in a sample.

What biomolecule do the newspaper, eggshells and gypsum contribute to the Winogradsky column?

One can discover several interesting things in the columns.

(i) Green photosynthetic bacteria and algae are on top,

Currently in 4th year (Hons) in the Department of Botany, University of Dhaka. Planned to have multiple careers one by one but promised to be with 'Plantlet' as long as it's primary stage remains unfinished. Email: abulaisshomrat@gmail.com. Minimum monthly resolution - Publish (1), Revise (3), Share (5)
Previous Nitrogen Fixation & Root Nodule Formation
Next Difference between: Environmental Microbiology

I have a question here. Suppose you design an experiment for measuring the activity of sulfur oxidising bacteria in soil. How would you prove that your activity measurement was due to biological activity

what are the purposes of using of sulfate, calcium carbonate, and cellulose in the soil for creating typical winogradsky columns.