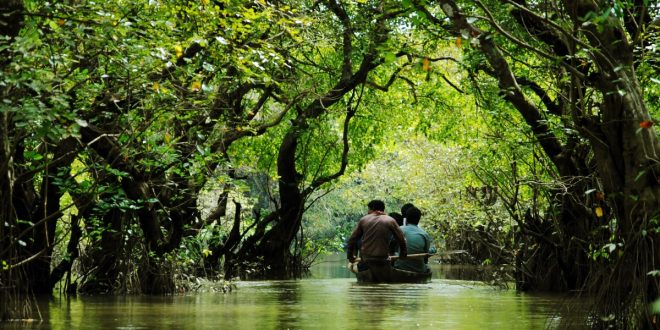 Its area is 3, 325.61 acre including 504 acre declared as the animal sanctuary in 2015. This only swamp forest in Bangladesh is located 26 kilometres (16 mi) far from Sylhet. The forest’s name comes from the word, “Rata” or “Pati” tree, used by the locals of Sylhet.

The evergreen forest is situated by the river Goain and linked with the channel Chengir Khal. Ratargul is known as “Sundarban of Sylhet”.

Ratargul Swamp Forest acts as a integral part of wetland ecosystems, serving as habitats, nursery grounds and sources of food for many organisms. The ecosystem of this swamp area consists of different types of habitats such as river, lowland with vegetation and depressions.

In the rainy season, the forest becomes flooded as at that time heavy water from India enters into the lake through the river Goain.

The forest remains flooded from May to early October. This time the temperature remains 32 degree Celsius. It drops to 12 degree Celsius in January. Maximum trees remain 10 ft under water (somewhere even 15–20 ft).But in the winter season, the forest become dry. Department of Forestry is responsible for its conservation. In Rainy season, it goes under 20-30 feet water.

In other seasons of the year, the water level is about 10 feet deep. “Koroch tree” is the most common tree in this forest. There are two haors in the southern part of this forest. Locally is these two bils are called Shilmul bil haor and the neoa bil haor.  It has been an insecure habitat of different wild animals like snakes, lizards, monkeys insects & birds. The interesting thing is that it has also been a great source of different local fish.

In the early eighties, this swamp forest was almost depleted with hardly some grassy vegetation, a few bushes of Patipata and a very few of the Koroj trees scattered here and there. Now this area have got two stories forests. The top story consists of Koroj and the understory consist of Patipata.

Two layer of plants can be seen in the swamp forest. The upper layer consists of trees and the lower one consists of intense Schumannianthus dichotomus. The canopy of the plants spreads up to 15 meters of height.

73 species of plants could be found in the forest till now. 80 percent of the forest area is covered with umbrella of the trees.
Here is the list of swamp plant species of Ratargul Swamp Forest.

Ratargul Swamp Forest has been an insecure habitat for different wild animals. Still animal habitation and Variation are getting enriched here. Snake and worm snake can widely be seen in this water-drowned forest. Mongoose can be seen in dry season. Monkey and Water Monitor also resides in the forest. Heron, Egret, Kingfisher, Parrot, Bulbul, Swan, Dove, Water fowl, Eagle and Kite Bird are some of the birds of the swamp forest. Cotton Pygmy Goose and other Migratory birds and Vulture visit the forest in winter. Name of some local fishes available in the forest are Batasio, Rita, Pabda, Rohu etc.

Ratargul Swamp Forest has unique floral and faunal composition than other forested areas of Bangladesh.

To save this swamp environment, government and forest department should make and implement some management policies which should be maintained strictly considering the opinion of the local people.