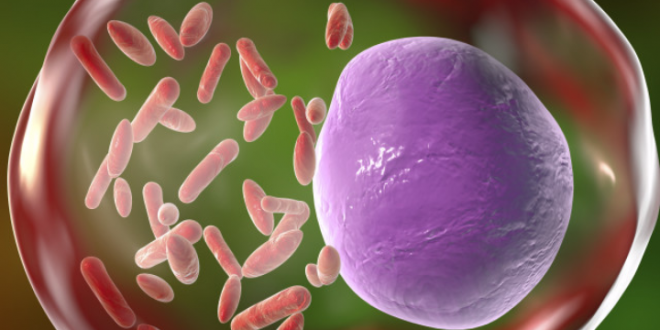 ‘Rickettsia’ is a genus of non-motile, gram-negative, non spore-forming, highly pleomorphic bacteria that may occur in the forms of cocci, rods, or threads. The term ‘rickettsia’ has nothing to do with ‘rickets’, which is a deficiency disease resulting from lack of vitamin D; the bacterial genus ‘Rickettsia’ was named after Howard Taylor Ricketts, in honor of his pioneering work on tick-borne spotted fever.

Properly, Rickettsia is the name of a single genus, but the informal ‘rickettsia’, plural ‘rickettsias’, usually not capitalised, commonly applies to any member of the order ‘Rickettsiales’.

Being obligate intracellular parasites, rickettsias depend on entry, growth and replication within the cytoplasm of living eukaryotic host cells (typically endothelial cells).

Accordingly,  Rickettsia species cannot grow in artificial nutrient culture; they must be grown either in tissue or embryo cultures; typically, chicken embryos are used.

Rickettsia species are transmitted by numerous types of arthropods, including chigger, ticks, fleas, and lice, and are associated with both human & plant diseases, Most notably, these species are the pathogens for many fever-like diseases. The majority of these bacteria are susceptible to antibiotics of the tetracycline group.

The disease spread among people where the population density is high & lice present among them. So, it spread profusely within army camp.

This article is very helpful for me.And thanks a lot to shompa apu
﻿

You’re welcome. And also thanks to you for your kind words.