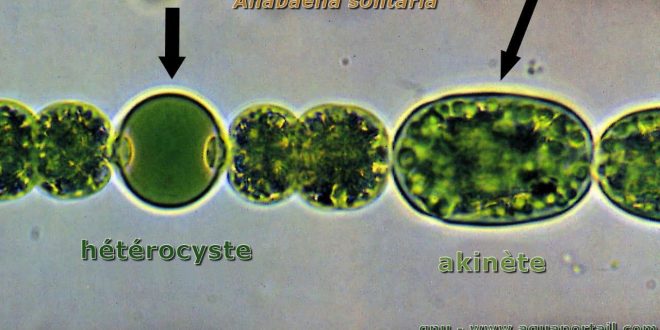 Imagine being a very special sibling, having some unique features, acting in a good and interestingly weird way unlike others – feeling important already, right? Heterocyst is such a sibling of other algal cells which altogether make a filamentous structure of the algae. Whereas the other cells perform the function of vegetation causing them a greenish or bluish green appearance, heterocyst being special makes its position clear by having a pale green color and acting awkwardly.

So, what is heterocyst?

It can be defined as a differentiated cyanobacterial cell that carries out nitrogen fixation under aerobic conditions. They are formed in response to a lack of fixed nitrogen (NH4 or NO3) in the algal environment.

Can be defined otherway as, a heterocyst is a differentiated, large and specialized cyanobacterial cell that carries out nitrogen fixation.

Famous phycologist Fritsch (1951) has described the heterocyst as ‘a botanical enigma’. It was because of their structures and functions. But before understanding the structural modifications, we need to know the functions of heterocysts as the activities shaped the structure of this micro-body.

The main function of heterocyst is to fix atmospheric nitrogen. They can do so as they have a special enzyme called ‘Nitrogenase‘ unlike other photosynthetic cells. Interestingly, nitrogenase is a notoriously oxygen sensitive enzyme i.e they activate in oxygen less or free environment.

But remember, both types of cells (normal cells and heterocysts) respire. But doesn’t respiration cause the evolution of oxygen?? How come nitrogenase work then? Find the answer below.

The heterocyst is modified in an enigmatic way just to withhold the nitrogenase enzyme creating an oxygen free cellular environment (virtually anoxic).

Now, lets understand how the heterocyst is modified to make such ideal condition.

Surrounded by thick glycolipid walls
To limit the entry of atmospheric gases, including oxygen.

Yellow, dense, uniform and homogeneous contents
It is because they have only carotenes. As they maintain an oxygen free environment to activate nitrogenase enzyme, they are devoid of all oxygen consuming and producing machines such as green pigments (normally present in chromatophores).

Pores present at the joining links to other cells
Though these cells maintain a strong isolation by having a dense thick wall around, they need to maintain communication with other cells for supply of substrates (for respiration) and also for the convey of nitrogen from heterocysts to the vegetative ones. In order to do so, they develop pores at the joining portions with other cells. Thus maintain a porotoplasmic micro-connection.
Note that, terminal heterocysts has single pore and intercalary heterocyst has double pores. At the same position, the cell wall remains very thick.

Transformation of vegetative cell into heterocyst

Heterocysts may develop from any normal cell of the filamentous body. But for this transformation, a specialized condition is necessary. The differentiation of a heterocyst is triggered only when the cells are exposed to a nitrogen deprived area (ammonia, nitrate, nitrite).

The functions are behind all of these enigmatic transformations. So lets see what and how do heterocysts work.

Another article will be linked later describing the process of nitrogen fixation in heterocysts in a detailed way.

Currently in 4th year (Hons) in the Department of Botany, University of Dhaka. Planned to have multiple careers one by one but promised to be with 'Plantlet' as long as it's primary stage remains unfinished. Email: abulaisshomrat@gmail.com. Minimum monthly resolution - Publish (1), Revise (3), Share (5)
Previous Study Botany in USA: Steps to Follow
Next Rickettsia: The Disease Causing Bacteria (Part-1)

There are several factors that influence seed germination such as temperature, moisture and seed dormancy. …