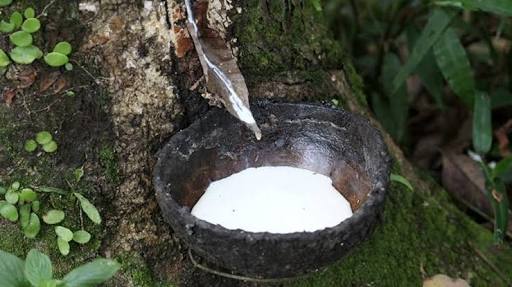 Rubber is a polyterpene consisting of a long chain of thousands of isoprene units. Isoprene is a five carbon compound and a basic unit of rubber. The isoprenes are joined together end to end to form a giant molecule called polymer.

The word rubber was first used by Priestly in 1770.

Latex is a gummy fluid, full of monute globules and is a mixture of water, hydrocarbon, resin, oil, acid and salt.

1. Rubber is soft and translucent at 20°C when it chilled from 0-10 Cit becomes hard and at temperature over 20°C it losses elasticity and becomes sticky.

2. Rubber is insoluble in water but soluble in benzene, carbon-di-sulfide, ether, chloroform and chlorinated hydrocarbon.

3. Rubber is amorphous in the unstretched state but shows crystalline behaviour when kept at 0°C for a long time.

1. Consists of long chain of isoprene unit connected with end to end to form polymer.

4. Michel Faraday in 1826 established that the chief constituent of rubber is hydrocarbon which has the formula C5H8.

Currently in 4th year (Hons) in the Department of Botany, University of Dhaka. Planning to have multiple careers one by one but promised to be with 'Plantlet' as long as it's primary stage remains unfinished.
Previous Oil Yielding Plants
Next Gymnosperm: Introduction, Characteristics & Classification