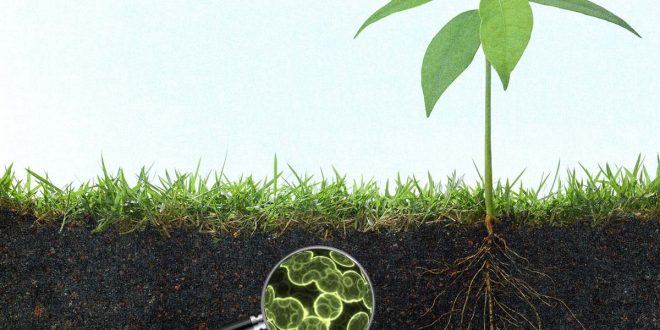 Soil Microbiology: The Scientific Discipline of Microbial Communities in Soil

Soil Microbiology is concerned with the study of all biological aspects of the microorganisms (bacteria, archaea, viruses, fungi, parasites and protozoa) that exist in the soil environment. However, before going ahead with the discussion of the functions and facts of microorganisms in soil, first we need to know what the soil and its environment is!

Soil can be defined as the top layer of the earth’s crust. It is in fact an extremely complex, variable and living medium formed by mineral particles, organic matter, water, air and living organisms. Soil is considered to be the “skin of the earth” with interfaces between the lithosphere, hydrosphere, atmosphere of Earth, and biosphere.

An agricultural definition of soil is “A dynamic natural body on the surface of the earth in which plants grow, composed of mineral and organic materials and living forms”.

Microbiologically, the soil environment is unique in several ways:

1. Soils serve as media for the growth of all kinds of plants.

2. Soils modify the atmosphere by emitting and absorbing gases (carbon dioxide, methane, water vapor, and the like) and dust.

3. Soils provide habitat for animals that live in the soil (such as groundhogs and mice) to organisms (such as bacteria and fungi), that account for most of the living things on Earth.

4. Soils absorb, hold, release, alter, and purify most of the water in terrestrial systems.

5. Soils process recycled nutrients, including carbon, so that living things can use them over and over again.

6. Soils serve as engineering media for the construction of foundations, roadbeds, dams and buildings, and preserve or destroy artifacts of human endeavors.

7. Soils act as a living filter to clean water before it moves into an aquifer.

Most soils contain five basic components viz. Like it before mention that the soil is a very complex and dynamic medium, the composition can fluctuate on a daily basis.

Gases or air is the basic component of soil. Because air can occupy the same spaces as water. In soil, air pockets allow water to pass through the soil and into the plants growing above and below the soil line. Oxygen is essential for root and microbe respiration, which helps support plant growth. Carbon dioxide and nitrogen also are important for the belowground plant.

Water is the second basic component of soil. Water is important for transporting nutrients to growing plants and soil organisms and for facilitating both biological and chemical decomposition. Soil water availability is the capacity of a particular soil to hold water that is available for plant use. The capacity of a soil to hold water is largely dependent on soil texture. The more small particles in soils, the more water the soil can retain.

The largest component of soil is the mineral portion, which makes up approximately 45% to 49% of the volume. Soil minerals are derived from two principal mineral types. Primary minerals, such as those found in sand and silt. Secondary minerals, on the other hand, result from the weathering of the primary minerals, which releases important ions and forms more stable mineral forms such as silicate clay. Clay is the richest of soil minerals, containing nutrients like Iron, Potassium and Calcium.

Organic matter is one of the important components of soil, consisting of plant and animal residues at various stages of decomposition of soil organisms. SOM increases soil fertility and acting as a reserve of plant nutrients, especially Nitrogen, Phosphorus, and Sulfur, along with micronutrients. There is a significant correlation between SOM content and soil fertility.

Humus: A brown or black organic substance consisting of partially or wholly decayed plant or animal matter that provides nutrients for plants and increases the ability of soil to retain water is called Humus. It makes the upper layers of the soil become dark. Plants and animals remain incorporating into the soil, get subjected to decomposition from the original material. After further decomposition, these are converted to brown to black organic complexes remaining no longer any trace of original material. Humus provides soil with a number of very important benefits. As follow:

Microorganisms are the final basic element of soils, and they are found in the soil in very high numbers but makeup much less than 1% of the soil volume. A common estimate is that one thimble full of topsoil may hold more than 20,000 microbial organisms. The largest of these organisms are earthworms and nematodes and the smallest are bacteria, actinomycetes, algae, and fungi.

Each of these groups has different characteristics and different functions in the soil it lives in. Importantly, these organisms do not exist in isolation; they interact and these interactions influence soil fertility as much or more than the organism’s individual activities.

Bacteria (bacterium) –  Bacteria are unicellular, prokaryotic microscopic cells. The bacteria are the smallest and the most numerous of the organisms in the soil. There are more than 400 named genera and an estimated 104 species. Species still unknown quite likely outnumber those already known. There are anywhere from 100 million to one billion bacteria in just a teaspoon of moist, fertile soil.

Actinomycetes (specialized bacteria)- unicellular to filamentous, prokaryotic organisms. They are often believed to be the missing evolutionary link between bacteria and fungi, but they have many more characteristics in common with bacteria than they do fungi.

Fungi – Fungi are mostly filamentous, eukaryotic. They group themselves into fibrous strings called hyphae. The hyphae form groups called mycelium which are less than 0.8mm wide but can get as long as several meters.

Algae and Cyanobacteria – Algae are unicellular to multicellular photosynthetic cells. The cyanobacteria (formerly the blue-green algae) are prokaryotes. All others are eukaryotic. Algae are present in most of the soils where moisture and sunlight are available. Their number in the soil usually ranges from 100 to 10,000 per gram of soil.

Protozoa –  The single-celled, colorless, animal-like eukaryotic organism which is called Forerunners” of the animal kingdom. They are larger than bacteria, varying from a few microns to a few millimeters. Their population in arable soil ranges from 10,000 to 100,000 per gram of soil and are abundant in surface soil. They can withstand adverse soil conditions, as they are characterized by a protected, dormant stage in their life cycle.

Viruses – Viruses are not organisms in the strict sense of being cells. They are better thought of as genetic elements; particles composed of DNA or RNA generally surrounded by a protein coat,  since they cannot reproduce unless they gain entry into a living “host” cell to do the job for them.

Bacteria are usually the most abundant group in soils in terms of numbers. Winogradsky devised an ecological classification of the soil bacteria population. Soil Bacteria can be divided into two broad categories,

1. Indigenous – Indigenous bacteria are true residents of the soil, which may have resistant stages (endospores, spores, cysts) and endure for long periods without being active metabolically. However, at some time, these natives proliferate and participate in the biochemical functions of the community. Indigenous population could be two groups:

2. Allochthonous – Allochthonous bacteria are transients or invaders in the soil habitat, which enter the soil with precipitation, diseased tissues, animal manures, sepage effluent, sludges, etc. May persist as resting forms and sometimes even grow for short periods. Do not contribute significantly to ecologically important transformations in the soil.

Significance of Microbes in Soil

Soil as a Culture Medium for Microbes

Above mentioned conditions are very much suitable for a culture medium for microbial growth.

This is an official account of this website. This ID holds articles from two categories. 1. Articles from our non-authors. 2. Articles of the authors whose IDs were deleted.
Previous Autopolyploidy: Multiplying Same Genome
Next Microbiology in Freshwater and Marine Habitats