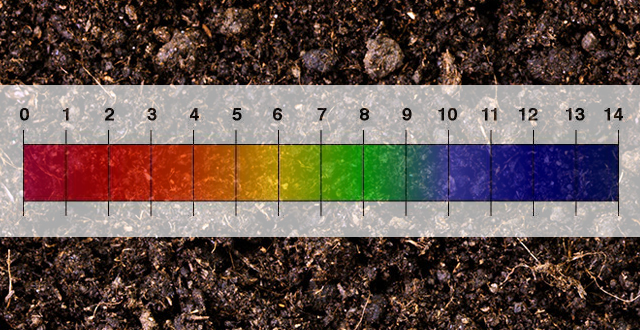 The importance of soil pH can be classified into its direct and indirect effects on edaphology and pedology:

1. Toxic and destructive effect of OH– and H+ ions on root growth

It is found that a destructive action on root tissues by acidity or alkalinity usually does not take place until the pH drops below 4.0 or rises above 9.0. When pH goes below 4.0 or above 9.0, it causes damage to root cells. There is an internal pH (4-6) of plant root cells, for which plants can only tolerate when the pH remains 4.0. Below this pH, they cannot tolerate it.

2. An unfavorable effect of low pH on the balance between the acidic and basic soil constituents available for absorption by plants

A certain balance exists between the acidic and basic nutrients which remain available for absorption by plants. At low pH, H+ ions are more available in soil solution whereas the basic cations are at high pH. As dominant ions are taken up by plants, at low pH, plants uptake H+ ions and it ( excess H+ ions ) changes the buffer capacity inside the plant, which disturbs various systems in the plants. Thus, Plants cannot grow or dies.

The main effect of soil reaction is on the availability of plants nutrients in the soil. The unproductivity of most acidic and alkaline soils is very often due to the lack of available plant nutrients.

For example, in the case of nitrogen, its availability is controlled mainly by microbial activity. Plants absorb most of N as nitrate whose availability depends on the activity of nitrifying organisms. These micro-organisms responsible for nitrification are the most active when pH is between 6.5 and 7.5. These are adversely affected if the pH falls below 5.5 and becomes completely inactive at below pH 4. Nitrification is also hampered in very alkaline soils having pH greater than 9.0. Besides, the decomposition of organic matter which is the primary source of N is slow under highly acidic conditions. That is how available nitrogen becomes a limiting factor in soils that are highly acid or alkaline.

In the case of phosphorus, the optimum pH range for its availability for plants is 6.0 – 7.0. When the soil reaction is above or below this range, P availability is reduced. When pH remains in the strongly acid range ( less than 5.0), Fe, Al, Mn, and similar other bases are usually present in a soluble state. The phosphate ions react with these bases and their insoluble phosphates are thus precipitated making them unavailable. Besides, the phosphates also react with sesquioxides clays, that is, hydrated oxides of Fe and Al such as limonite, gibbsite, etc. present in the soil and forms insoluble hydroxyl-phosphates of Fe, Al, e.g. Al(OH)2.H2PO4. Similarly, when the soil is alkaline, phosphates react with Ca and Mg carbonates and forms insoluble Ca and Mg phosphates, which can be shown as follows:

In all these cases, the soil pH leads to the fixation of available phosphorus making it unavailable. In soils with pH 7.5-8.5, phosphate is present mainly as tricalcium phosphate and hence is mostly unavailable for plant growth. When the pH is more than 8.5, the availability of phosphate again increases probably because of the formation of soluble sodium phosphate.

Fig. General relationship between soil pH and availability of plant nutrients in minimally and moderately weathered soils; the wider the bar, the more availability.

Most bacteria and Actinomycetes generally function well at intermediate and high pH values. Generally, fungi id particularly versatile flourishing satisfactorily over a wide pH range. Therefore, the fungal activity becomes predominant in acid soil. However, at intermediate and high pH, bacteria and Actinomycetes are strong competitors and tend to dominate the microbial activity. For bacteria, the best pH is 5.5 and above pH 5.5, nitrification takes place in the soil.

3. Toxicity of various elements due to high solubility

Solubility varies with soil pH.  At low pH, some metals are solubilized in the soil solution, which causes in excessive availability, resulting in a toxic influence on plant growth. As plants require Fe, Mn, and Al in very small amounts, their presence in soil solution in more than this low concentration exerts a toxic effect on plants.

For example, Al causes several types of damage in plants. On the membranes of young root tips, Al can block the sites where Ca is normally takes in. Aluminium binds very strongly with P and in doing so interferes with the metabolism of P-containing compounds essential for energy transfers (ATP) and genetic coding (DNA). Aluminium also restricts cell wall expansion as it binds to pectins making the wall more rigid.

4. Physical condition of the soil

The soil pH exerts an important influence on soil structure. As soil pH is governed by the nature of cations held by colloidal particles, the cations control the aggregation of colloidal clay, and hence soil reaction indirectly influences soil structure. A soil gets deflocculated when its pH goes above 8.2-8.3. Then the particles are dispersed, soil structure gets broken down, pore space becomes clogged, water percolation is hampered and many other physical disturbances occur. At low pH, the properties of the cementing agents, such as polysaccharides, get damaged but at pH 6-7, all conditions remain well.

Soil pH regulates the prevalence of plant diseases. Diseases are of two types, transmittable which is caused by pathogens, and non-transmittable which is caused by nutrient deficiency. Both are influenced indirectly by soil pH. For example, Streptomyces scabies, a soil-born pathogen responsible for sweet potato pox is favored at a pH of 5.2. But, when pH goes down to below 4.2, this pathogen cannot survive.

Soil pH also impacts the competitive powers of different plant species. For example, in acid soils, acid-loving or acid-tolerant plants can survive and grow well, while other plants cannot.

7. Mobility of many pollutants

The mobility of many pollutants or trace elements in the soil is affected by soil pH by influencing the rate of their biochemical breakdown, their solubility, and their adsorption to colloids. Thus, soil pH is a critical factor in predicting the probability that a given pollutant will contaminate groundwater, surface water, and food chains. Soil pH increases the solubility of soil organic matter by enhancing the dissociation of acid functional groups. It also weakens the bonds between the organic constituents and clay.

Soil pH was the most significant soil property in the degradation of atrazine. Generally, alkaline or slightly acidic pH promotes bio-degradation, on the other hand, acidic environments pose limitations to bio-degradation. Moreover, soil pH controls the soil structure. At high pH, soil structure gets broken down, pore space becomes clogged and water percolation is hampered.

Natural Soil pH exhibits the total effects of the soil-forming factors.  The pH of newly formed soils is accounted for by minerals in the soil’s parent material. However, the following factors are seen to have a very important influence on soil pH:

Acidity or Basicity of fertilizers

If plants used 100% of applied nitrogen, farmers could save money and apply less. But, because some nitrogen is not used by plant, farmers apply nitrogen fertilizer at greater rates. The nitrate formed from nitrification of ammoniacal fertilizers that are not assimilated by plants leaches from the soil, leaving behind the acidity created in the nitrification reaction. Phosphoric acid released by dissolving phosphate fertilizer granules can lead to pH grades as low as 1.5 near the granule.

Temperature and rainfall regulate leaching intensity and soil mineral weathering. In warm and humid environments, soil pH drops over time in a process called soil acidification. Rainwater has a slightly acidic pH (usually about 5.7) due to a reaction with CO2 in the atmosphere that produces carbonic acid. When this water flows through the soil it results in the leaching of basic cations from the soil as bicarbonate; this increases the percentage of AI3+ and H+ relative to other cations. In dry climates, soil weathering and leaching are less severe. That’s why pH can be neutral or alkaline.

Soil pH is influenced by land use and management. Vegetation type impacts soil pH. For example, regions of forestland tend to be more acidic than regions of grassland. Conversion of land from forestland or grassland to cropland can result in severe pH changes after a few years. Because of the loss of organic matter and removal of soil minerals when crops are harvested, these changes in pH have occurred. These changes also happen for the effects of nitrogen and sulfur fertilizers.

When roots take up cation and anion nutrients, they maintain electrical neutrality in plant root cells by absorbing or releasing H+ ions, organic acids, and OH– ions. When plants take up more cations than anions, acidification is seen. This causes rhizospheres to be more acidic than the surrounding soils. Production of organic acids by plant roots and microbes, and respiration that enhances the partial pressure of CO2 in the rhizosphere also cause rhizosphere acidification.

Protonation and Deprotonation of mineral surfaces

Mine wastes containing iron pyrite (FeS2 ) and other sulfides added to soils can result in highly acidic soil conditions. Drainage of estuaries or wetlands containing high-sulfide sediments (acid-sulfate soils) also generates low pH soils. Acid rain caused by industrial releases of SO2 and NOx gases is a widespread problem for the natural landscape. The gases emitted from coal combustion, for example, create nitric and sulfuric acid vapors which are mixed with rain and acidify soils.

The high sulfur content of brackish water wetlands causes low pH soils, because of the production of sulfuric acid upon oxidation of iron sulfide minerals.

currently student of University of Dhaka. I am on my B.S Honours 2nd Year at Department of Botany. I've always been passionate about learning new things about plants and want to know more and more. Plantlet is such an opportunity to expand my horizons while doing something I love. Email: shajneenshoily@gmail.com Minimum Monthly Resolution - Publish (1) , Revise(1) , share (2)
Previous Soil Reaction: Pools of Soil Acidity
Next Soil Reaction: Soil pH, Sources of H+ & OH- Ions