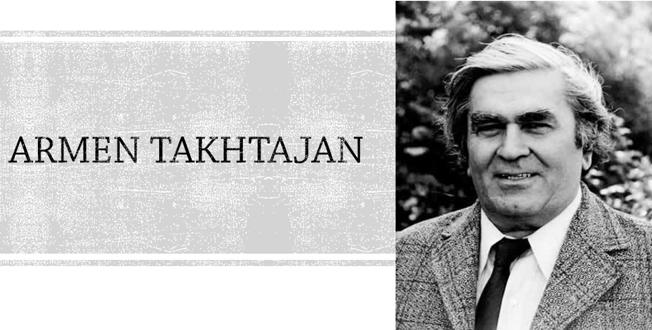 Present-day Armenian-born botanist & systematist Armen Leonovich Takhtajan (1910-2009) was one of the most influential figures of 20th century in the field of plant evolution, systematics, and biogeography. His other interests included morphology of flowering plants, paleobotany, and the flora of the Caucasus (region between the Black sea & the Caspian sea).

He worked as a paleobotanist in Komarov Botanical Institue of Leningrad, USSR (present day Russia) of Russian Academy of Sciences. While working in the institute, Takhtajan in 1942 developed a classification scheme for flowering plants that emphasized phylogenetic relationships between plants.

This first attempt made the arrangement of classification up to the orders of higher plants, based on the structural types of gynoecium and placentation.

After 12 years i.e. in 1954, the actual system of classification was published in ‘The Origin of Angiospermous Plants’ in Russian language. It was translated into English in 1958 and thus came to the attention of the rest of the world. Further versions appeared in 1959 (Die Evolution der Angiospermen).

Later on, in 1966 (1964?), he proposed a new system of classification in Russian language (Sistema i filogeniia tsvetkovykh rastenii). The same classification was published in ‘Flowering Plants: Origin and Dispersal’ (1969) in English.

Later on, in 1980, a further revision of his system was published in ‘Botanical Review’.

To trace the evolution of angiosperm, he was particularly inspired by Hallier’s attempt to develop a synthetic evolutionary classification of flowering plants based on Darwinian philosophy.

The classification as proposed by Takhtajan treats flowering plants as a division (phylum) named Magnoliophyta, with two classes, Magnoliopsida (dicots) and Liliopsida (monocots). These two classes are subdivided into subclasses, and then superorders, orders, and families.

In the class Magnoliopsida,

In the class Liliopsida,

The Takhtajan system is similar to the classification scheme of Cronquist, but with somewhat greater complexity at the higher levels. Takhtajan favored smaller orders and families, to allow character and evolutionary relationships to be more easily grasped.

The Takhtajan classification system remains influential; it is used, for example, by the Montréal Botanical Garden.

“Professor Armen Takhtajan, a giant among botanists, has spent a lifetime in the service of his science and of humanity. As a thoroughgoing internationalist, he promoted close relationships between botanists and people of all nations through the most difficult times imaginable, and succeeded with his strong and persistent personal warmth. He also has stood for excellent modern science throughout this life and taught hundreds of students to appreciate the highest values of civilization whatever their particular pursuits or views, or the problems they encountered.”

Currently in 4th year (Hons) in the Department of Botany, University of Dhaka. Planned to have multiple careers one by one but promised to be with 'Plantlet' as long as it's primary stage remains unfinished. Email: abulaisshomrat@gmail.com. Minimum monthly resolution - Publish (1), Revise (3), Share (5)
Previous Anthoceros: The Hornworts
Next Biomass Destruction in Aquatic Bodies