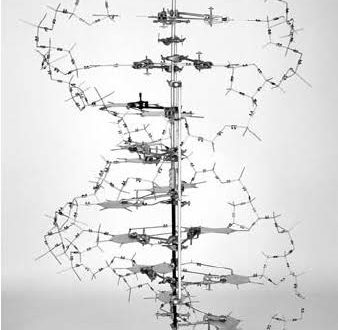 DNA or Deoxyribonucleic Acid is the hereditary material present in all living organisms through which genetic information of one generation is transferred to the next generation.

Simply DNA is the structural & functional unit of heredity.

DNA double helix is probably the most iconic of all biological molecules.

In the early 1950s, researchers working on Genetics used the term “gene” which means the smallest unit of genetic information. But they did not have an idea of what a gene actually looked like structurally and chemically or how it was transferred from one generation to the next generation.
In 1944 Oswald Avery showed that DNA is the carrier of hereditary information, in Pneumococcal bacteria. Nevertheless, many scientists continued to believe that DNA had a structure too uniform and simple to store genetic information for making complex living organisms. According to scientists, the genetic material must consist of proteins, much more diverse and intricate molecules are known to perform a multitude of biological functions in the cell.

From the work of biochemist Phoebus Levene and other scientists, it was discovered that DNA is composed of subunits called “Nucleotide”.
A Nucleotide is consists of a molecule of Deoxyribose sugar, a Phosphate group & one of the four Nitrogenous bases: Adenine (A), Guanine (G), Thymine (T) & Cytosine (C).

– Here Thymine & Cytosine are called Pyrimidines.  They both consist of one ring.

– Adenine & Guanine are called Purines. They both consist of two rings.

He also found that the relative amount of nitrogenous bases A, T, G, C varies from organism to organism depending on the composition of DNA.

Rosalind Franklin was a British chemist who was an expert in  “X-ray  Crystallography”, an excellent technique to determine the structure of DNA. In this technique when the crystallized form of a molecule, for example, DNA is exposed to X-rays; some of the rays are deflected by the atoms in the crystal which forms a diffraction pattern that gives clues about the molecule’s structure.

Franklin’s crystallography gave important clues about the structure of DNA. Some of these came from the famous “Image-51” a remarkably clear X-ray diffraction image of DNA. This image was produced by Franklin and her graduate student.

Instead of carrying out new experiments Watson and Crick mostly collected and analyzed existing pieces of data from the experiments of other scientists including Franklin, Wilkins and Chargaff and put them together in new ways.

Some of the most important clues of DNA’s structure came from Rosalind Franklin’s work. . Maurice Wilkins showed Watson and Crick the  Crystallography data obtained by Rosalind Franklin. The X-ray data confirmed the 3-D structure that Watson and Crick had theorized for DNA. The X-shaped diffraction pattern of Franklin’s image immediately suggested a helical, a two-stranded structure for DNA.

In 1962 James Watson, Francis Crick, and Maurice Wilkins were awarded the Nobel Prize in Medicine for discovering DNA Double Helix Structure. Unfortunately, by then Rosalind Franklin had died due to cancer and Nobel prizes are not awarded posthumously.

DNA Model Given By Watson & Crick 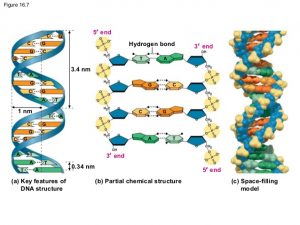 Some Other Characteristics Of DNA

The groundbreaking discovery in 1953 of the double helix structure of Deoxyribonucleic Acid (DNA) by James Watson and Francis Crick marked a milestone in the history of science and gave rise to modern molecular biology. Their discovery yielded ground-breaking insights into the genetic code and protein synthesis which helped to produce new scientific techniques such as recombinant DNA research, genetic engineering, rapid gene sequencing etc.

This is an official account of this website. This ID holds articles from two categories. 1. Articles from our non-authors. 2. Articles of the authors whose IDs were deleted.
Previous Bonsai : An Art Of Miniaturizing Trees
Next অপ্রত্যাশিত অতিথি