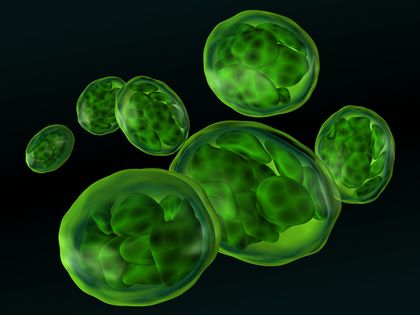 Ultra Structure of Chloroplast in Algae

Algae are both eukaryotic and prokaryotic organisms that have no roots, stems or leaves but do have chloroplast and other pigments for carrying out photosynthesis. The basic structure of chloroplast consists of a series of flattened membranous vesicle called thylakoids or disc and a surrounding matrix. These thylakoids can be free from one another or grouped to form thylakoid bands.

Here, we are going to discuss the ultrastructure of chloroplast in algae. But first, we need to know about the term ‘Ultra Structure ‘.

Ultrastructure is the detailed structure of biological specimens, such as cell, tissue or organ (mitochondria, chloroplast, etc) that can be observed by electron microscope as they are too small to be seen with an optical microscope1. Ultrastructures along with molecular phylogeny has been a reliable way to classify organisms.

On the basis of the ultrastructure of the chloroplast, Lee divided the algae into four groups. They are:

There are different types of chloroplasts found in eukaryotic algae. The ultrastructure of the chloroplast of 13 classes of algae belonging to 5 types are described below:

So, a great diversity of chloroplasts found amongst various algal groups which are the result of an intriguing evolutionary process that involved the acquisition of chloroplast by different eukaryotic organisms.

This is an official account of this website. This ID holds articles from two categories. 1. Articles from our non-authors. 2. Articles of the authors whose IDs were deleted.
Previous Genetic Controlled Male Sterility
Next Evolution of Green Algae: Volvocine Trend

Dear Nasif, we have added the image that you have asked for. The other images are also updated with better resolution.

Feel free to comment if you find more loopholes.

THANKS FOR THE CONCISE INFORMATION, NOW I UNDERESTAND BETTER THE ENVELOPE TYPES AND COULD EXPLAIN THEM IN MY CLASSES

We are really delighted to help you out. Stay with Plantlet to explore more and more.