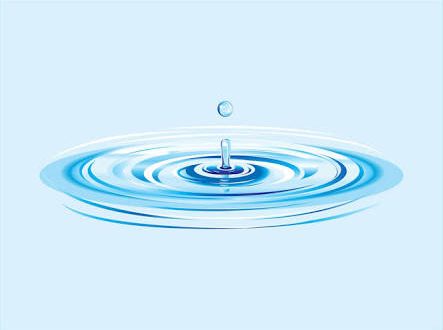 The water budget of a unit area of the earth’s surface is formed from the components:

This equation states that, water added to the earth’s surface by precipitation is partitioned among the components E, D, R and U.

R is a temporary storage of water in the soils and U designates chemically or physically bound water.

It can be assumed that R and U are constant, and so fluctuations of these quantities bcame insignificant in the water balance.

From continuity principles it can be assumed that, for the entire earth, the quantity of water that evaporates from the surface is equal to the quantity that is replaced as precipitation. For the whole earth (G = Global) therefore, it has to be true:

This does not mean that the components, P, E and D are equal on land and water surfaces; they are much different. If one estimates for land (L) or ocean (S) surfaces the quanitites of precipitation PL , PS and Evaporation EL , ES it can be shown that PL ≠ EL and PS ≠ ES.

The balance is defined by PZ = EZ only for internally drained regions of the continents (Z), where DZ = 0

Over the oceans, total evaporation exceeds the total precipitation. The difference-

Is compensated by the runoff from the continents-

Where, on the average, precipitation exceeds evaporation.

This is a major intrusion into the processes of energy flow and nutrient cycling that support life on the earth.