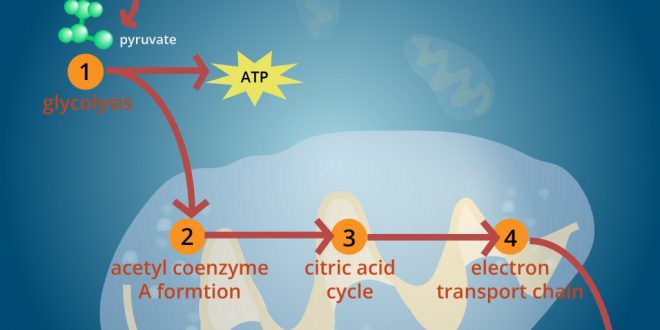 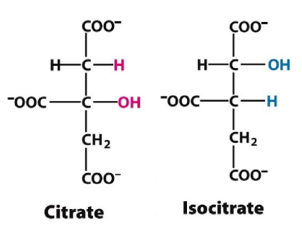 In the first step of the cycle, acetyl CoA combines with a four-carbon acceptor molecule, oxaloacetate to form a six-carbon molecule called citrate. After a quick rearrangement, this six-carbon molecule releases two of its carbons as carbon dioxide molecules in a pair of similar reactions, producing a molecule of NADH each time. The enzymes that catalyse these reactions are key regulators of the citric acid cycle, speeding it up or slowing it down based on the cell’s energy need.

The remaining four-carbon molecule undergoes a series of additional reactions, first making an ATP or, in some cells, a similar molecule called GTP then reducing the electron carrier FAD to FADH2, and finally generating another NADH. This set of reactions regenerates the starting molecule, oxaloacetate, so the cycle can repeat.

Overall, one turn of the citric acid cycle releases two carbon dioxide molecules and produces three NADH, one FADH2 and one ATP or GTP. The citric acid cycle goes around twice for each molecule of glucose that enters cellular respiration because there are two pyruvates—and thus, two acetyl CoA made per glucose.

The TCA cycle is completed in 8 major steps.

In the first step of the citric acid cycle, acetyl CoA joins with a four-carbon molecule, oxaloacetate, releasing the CoA group and forming a six-carbon molecule called citrate.

In the second step, citrate is converted into its isomer, isocitrate. This is actually a two-step process, involving first the removal and then the addition of a water molecule, which is why the citric acid cycle is sometimes described as having nine steps—rather than the eight listed here.

In the third step, isocitrate is oxidized and releases a molecule of carbon dioxide, leaving behind a five-carbon molecule—α-ketoglutarate. During this step, NAD+ is reduced to form NADH. The enzyme catalyzing this step, isocitrate dehydrogenase, is important in regulating the speed of the citric acid cycle.

The fourth step is similar to the third. In this case, it’s α-ketoglutarate that’s oxidized, reducing NAD+ to NADH and releasing a molecule of carbon dioxide in the process. The remaining four-carbon molecule picks up Coenzyme A, forming the unstable compound succinyl CoA. The enzyme catalyzing this step, α-ketoglutarate dehydrogenase, is also important in regulation of the citric acid cycle.

In step five, the CoA of succinylCoA is replaced by a phosphate group, which is then transferred to ADP to make ATP. In some cells, GDP- guanine diphosphate—is used instead of ADP, forming GTP—guanine triphosphate—as a product. The four-carbon molecule produced in this step is called succinate.

In step six, succinate is oxidized, forming another four-carbon molecule called fumarate. In this reaction, two hydrogen atoms—with their electrons—are transferred to FAD, producing FADH2. The enzyme that carries out this step is embedded in the inner membrane of the mitochondrion, so FADH2 can transfer its electrons directly into the electron transport chain.

In the last step of the citric acid cycle, oxaloacetate—the starting four-carbon compound—is regenerated by oxidation of malate. Another molecule of NAD+ is reduced to NADH in the process.

We have just read about two pathways in cellular respiration—glycolysis and the Kreb’s cycle—that generate ATP and other assimilates like NADH+H and FADH2. However, most of the ATP generated during the aerobic respiration of glucose is not generated directly from these pathways. Rather, it is derived from a process that begins with moving electrons through a series of electron carriers that undergo redox reactions: the electron transport chain.

The ratio of volume of CO2 evolved to the volume of O2 consumed in respiration is called respiratory quotient.

In case of carbohydrate, RQ equals 1.

In case of organic acid, RQ is more than 1.