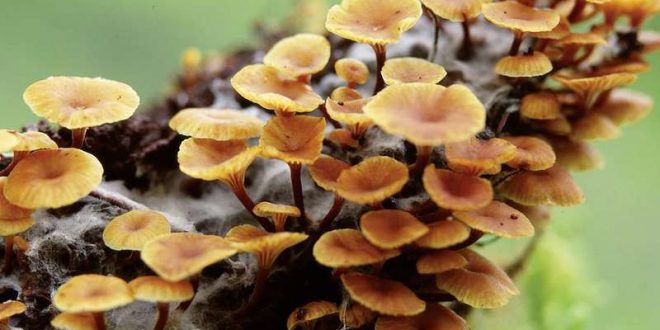 Agaricales is an order of fungi in the class Agaricomycetes (phylum Basidiomycota, kingdom Fungi). It is one of the most diverse orders of the phylum Basidiomycota. Traditionally, agarics were classified based on the presence of gills (thin sheets of spore-bearing cells, or basidia) and mushroom-shaped fruiting bodies. Some other conspicuous parts are pileus (cap) and stipe (stalk).

Agaricales have been known to humans ever since we first became aware of our environment and are among the relatively few fungi that have common names in addition to scientific binomials. For example:

Even the word ‘mykes’ of ‘Mycology’ actually meant mushroom to the ancient Greeks, and thus etymologically, mycology is the study of mushrooms.

In 2017, scientists discovered the oldest known fossilized Agaricales mushroom, Gondwanagaricites magnificus, which was unearthed in northeast Brazil and dates to the Aptian Stage of the Lower Cretaceous Series (125 million to 113 million years ago).

The typical basidiocarp in most agarics is the well-developed mushroom. The tissues comprising a mushroom consist of closely packed, dikaryotic hyphae that arise from the somatic hyphae growing within a particular substrate.

Mycorrhiza is the symbiotic associations between the hyphae of many kinds of fungi and the absorbing organs – typically the roots of plants. Hacskaylo (1972) described this type of relationship as a ‘physiologically well balanced reciprocal parasitism’.

The members of Basidiomycota can form mutualistic relationships with the roots of the plants especially the woody types. And this association can be both superficial or internal to the tissue.

Gk. ektos = outside + mykes = mushroom + rhiza = root): a mycorrhiza in which the fungal hyphae grow only intercellularly, never penetrating the walls of the host plants.

Gk. endo = inside + mykes = mushroom + rhiza = root): a mycorrhiza in which the fungal hyphae penetrate the cell walls of the host plant; also called vesicular-arbuscular, or VA mycorrhiza. Usually no dense hyphal growth  of any sort is visible on the surface of the root. The hyphae often form swellings (vesicles) and minute branches within (arbuscules) the cells of the host. That’s why they are commonly referred as vesicular-arbuscular (VA) mycorrhiza.

It has been suggested that without mycorrhizal associations most plants would not be able to survive in the competitive communities found in natural soil habitats. In fact the rise of the land plants has been attributed to these associations (Pirozynski and Malloch, 1975; Malloch et al., 1980).

In return, the fungal partner gains

(Details on morphological and anatomical details on basidiocarps of agarics and boleti will be added later.)

Distinguish between poisonous and non-poisonous mushrooms

According to Chang (1993), about 14 species of agarics are cultivated for food. Of these, only six are grown on an industrial scale. These include the

Currently in 4th year (Hons) in the Department of Botany, University of Dhaka. Planned to have multiple careers one by one but promised to be with 'Plantlet' as long as it's primary stage remains unfinished. Email: abulaisshomrat@gmail.com. Minimum monthly resolution - Publish (1), Revise (3), Share (5)
Previous Clavicipitales: Ergot by Claviceps Purpurea
Next Classification of Medicinal Plants