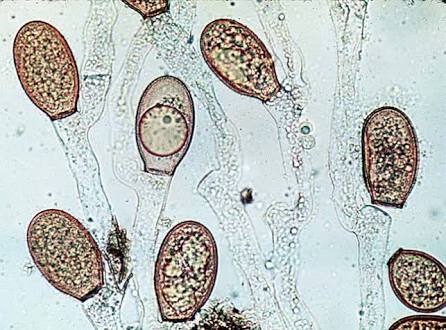 The phylum Chytridiomycota contains five orders, 900 species and the single class Chytridiomycetes which contains a number of parasitic species.

At least two species in this class are known to infect a number of amphibian species.

These are the only members of the kingdom Fungi that produce motile cells at some stage in their life history. Except for a few species with polyflagellate cells, the motile cells (both zoospores and gametes) of these organisms each possess a single, posteriorly directed, whiplash flagellum.

Types of thallus structure in the Chytridiales 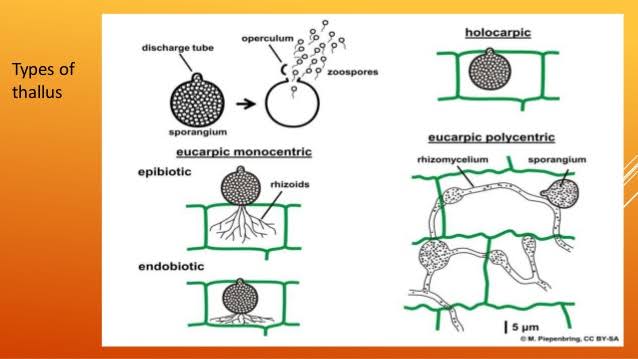 Rhizoid: short, delicate, filamentous or thread like structure and extension of thallus is called Rhizoid. 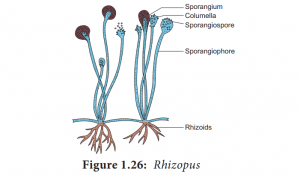 Source
It helps in anchoring the substratum and  absorption of nutrients.

During asexual reproduction zoospores may-

There are 3 types of sexual reproduction in the class Chytridiomycetes-

In the chytrids, this is accomplished by transfer of the entire protoplast of one gametangium into ther other (in case of unfavorable condition) – Rhizophydium, Zygorhizidium, Planktonicum.

Somatogamy is simply the fusion of the somatic structure.In some chytrids, fusion between rhizoidal filaments precedes the formation of a resting spore. e.g: Chytriomyces hyalinus.

The Chytridiomycetes is denoted as aquatic fungi because it disperses through water with motile spores. Members are found in soil, fresh water and saline estuaries.

They are first known from the Rhynie chert. One-celled members of the Chytridiomycota live in either intracellular or epibiotic parasitic association, mostly with algae, occasionally with other Chytridiomycota or Oomycota, and rarely with Zygomycota.

Reference used for info: Introduction To Mycology by Alexopoulos.

A girl with a lot of dreams to accomplish and make her parents proud. Currently studying in 1st year of B.Sc in University of Dhaka. Want to walk with Plantlet a long way. Interested with debate, music, photography and poem recitation. Email: syedanusratbd@gmail.com Minimum Monthly resolution: Publish (1), Revise(1), Share (1)
Previous Fungi: Vegetative Structures & Growth
Next Key: A plant Identifying Method

Well organised info’s make it so much interesting to complete. Supportive images may be added for comfort.

Some of the technical problems that you need to solve