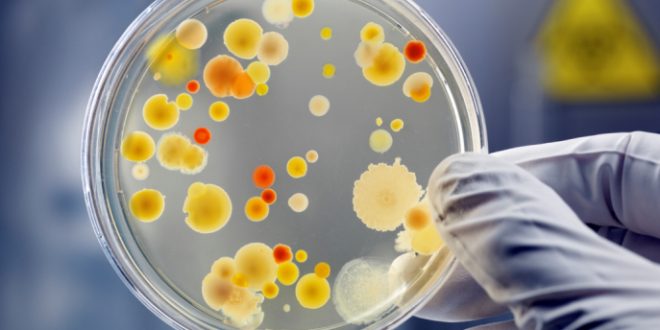 Bacteria (singular: bacterium) are microscopic unicellular organisms that thrive in a variety of environments. These organisms can live in the soil, in the ocean and in the human gut. This organisms are available almost everywhere on our earth and are important to the planet’s ecosystems. Some species can live under extreme conditions of pressure and temperature. The physical body is filled with bacteria and is estimated to contain more bacterial cells than human cells. Most of the bacteria in the body are harmless and some are even helpful. A relatively small number of species cause disease. The relationship between humans and bacteria is complex. Sometimes bacteria help us by soaking milk in yogurt or by helping digestion. In other cases, bacteria are destructive and cause diseases such as pneumonia and other diseases.

In 1829, Ehrenberg suggested the word bacteria. Then In 1675, Antony Von Leeuwenhoek observed them first and in 1676 called them Animalcules. In 15th november of 1677 Antony Von Leeuwenhoek presents his results at the Royal Society of London. It is estimated that there are 10 million species of bacteria worldwide. Most are very small unicellular organisms (some wail and many are associated in a mass of bacteria). The cells can be rod-shaped, spiral or speherical. And they lack nucleus and most of the typical cell compartment.

Bacteria (singular: bacterium) are classified as prokaryotes, which are single-celled organisms with a simple internal structure that lacks a nucleus, and contains DNA that either floats freely in a twisted, thread-like mass called a nucleoid or in separate circular pieces which called plasmids. The Ribosomes which are the spherical units in bacterial cell in which proteins are sequenced from individual amino acids using the information which encoded in ribosomes.

This bacterial cells are usually surrounded by two secured/protective layers: an inner cell membrane and an outer cell wall. Certain bacteria, such as mycoplasmas, have no cell wall at all. Some bacteria may even have a third outer protective layer called a capsule. The whip-like extensions often cover the surfaces of bacteria, the long ones called flagella or the short ones called pili, which help the bacteria move around and adhere to a host.

Bacteria are nearly always the foremost abundant organisms found in surface soils in terms of numbers. Culturable numbers vary counting on specific environmental conditions, particularly soil moisture and temperature, Culturable bacteria are often as numerous a whereas total populations (including viable but non-culturable) can exceed 1010 cells/g. In unsaturated soils, aerobic bacteria are usually two or three orders of magnitude more numerous than anaerobes. Anaerobic populations increase with increasing soil depth, but rarely predominate unless the soils are saturated and / or clogged.

The ecosystem both on land and in the water depends heavily on the activity of bacteria. The cycle of nutrients such as carbon, nitrogen and sulfur is completed by their incessant work.

Organic carbon in the form of dead and rotting organisms would quickly break down the carbon dioxide in the atmosphere, if not the activity of decomposers. This may not sound bad to you, but realize that without carbon dioxide there would be no photosynthesis in plants and no food. When organisms die, the carbon in their tissues is no longer available to most other living things. Breakdown is the breakdown of these organisms and the release of nutrients into the environment and one of the most important jobs that bacteria do. Although there are many meanings of bacteria which are briefly described below:

When milk is kept under favorable conditions for bacterial growth, raw milk develops a sour flavor. This change comes mainly by Streptococcus lactis and Streptococcus cremoris and certain lactobacilli like Lactobacillus fermenti. They ferments the lactose sugar (carbohydrate) of milk and produce lactic acid which make the milk taste sour.

Some lipolytic and proteolytic change may also occur but it is not detectable by taste and smell. Proteolysis occurs by Bacillus subtilis, B. cereus, Pseudomonas spp., Proteus spp., Streptococcus liquefaciens etc. Lipolysis which is caused by Candida lipolytica, Achromobacter lipolyticum, Pseudomonas fluorescens, Penicillium spp. etc.

Soil bacteria play an important role in the salt solution in the decomposition of organic matter. They serve a dual purpose. Primarily, they act as scavengers that remove harmful debris from the earth. Second, they put it back in the soil as plant food. The corpses and waste of organisms (both plants and animals) are decomposed by the activities of the saprophytic bacteria. As a result, water will eventually be purified and turned into an odorless and valuable fertilizer instead of a dangerous and expensive waste product.

Some bacteria play an important role in maintaining and others in increasing soil fertility. The fertility of the soil is proportional to its nitrogen content. Nitrogen is an essential part of all living protoplasms. All growing plants therefore need it in their metabolism.

4. Bacteria in nitrification and nitro-fixing

The nitrogen-fixing bacteria are therefore unique in their ability to tap a source of nitrogen that most other plants do not have. This process of nitrogen conversion is known as nitrogen fixation.

Humans have used the activities of bacteria for various industrial processes. The butter and cheese industry depends entirely on the activities of the lactic acid bacteria. The hardening of tea, tobacco, and the making of indigo are other examples of beneficial chemical activities by bacteria that have been controlled for the benefit of mankind. The tanning of hides in the manufacture and manufacture of leather sponges also involves the use of bacteria.

Linen cannot be made without bacterial activity. The tough fibers that remain are separated. These fibers are spun and woven into linen, ropes, etc. The preparation of coffee and cocoa also depends on the effects of bacteria. The cocoa beans are white in color and have a rather bitter taste. The bacteria digest the bitter seed coats and give it its characteristic color, taste and aroma.

Vitamin B is the product of the fermentation of sugars and starch by Clostridium acetobutilicum. Vitamins are used in medicinal preparations.

Butyl alcohol, acetone and ethyl alcohol are produced in a single fermentation process when a certain bacteria is allowed to act on the cooked corn starch. These products are important commercial solvents.

In the field of medicine there are many uses of bacteria and they are vast in word. Like-

Genetic engineering is the manipulation of genes. It is also called recombinant DNA technology. In genetic engineering, pieces of DNA (genes) are introduced into a host by a variety of techniques, one of the first being the use of a virus vector. Foreign DNA becomes a permanent feature of the host and is replicated and passed on to daughter cells along with the rest of its DNA. Bacterial cells are transformed and used in the production of commercially important products. Examples include the production of human insulin (used to treat diabetes) and human growth hormone (somatotropin used to treat pituitary dwarfism.

Bacteria like Clostridium butyricum are wont to separate jute, hemp and flax fibers within the taping process. The plants are immersed in water and once they swell, they’re inoculated with bacteria that hydrolyze the pectic substances within the cell walls and separate the fibers. Alternatively, the plants are scattered on the bottom and retreated naturally because the dew provides moisture. These separate fibers are wont to make ropes, sacks etc.

Biotechnology involves the use of microorganisms, including bacteria and fungi in manufacturing and service industries. These include the manufacture of chemicals such as ethanol, acetone, organic acid, enzymes and fragrances. Bacteria are important in the manufacturing of many food supplements and pharmaceuticals. For example, Escherichia coli is used for the commercial preparation of riboflavin and vitamin K.

Bacteria also can be used rather than pesticides in biological pest control. Bacillus thuringiensis (also called BT), a gram-positive, soil-dwelling bacterium, is typically used here. This bacterium is employed as a butterfly-specific insecticide under trade names like Dipel and Thurizid. due to their specificity, these pesticides are considered environmentally friendly and have little impact on humans, wildlife, pollinators, or other beneficial insects.

Bacteria living in the gut of cattle, horses and other herbivores, for example Ruminococcus spp., help digest cellulose by secreting the enzyme cellulase. This is how herbivores are able get the energy they need from grass and other plants.

Also, Escherichia coli, part of the intestinal microbiota of humans and other herbivorous animals, converts consumed food into vitamin K2. This is absorbed in the colon and, in animal models, is sufficient to meet their daily requirement of the vitamin.

Bacteria help purify animal skins so they are easy, clean, and suitable for use. This is an incomplete description of the beneficial activities of bacteria. Anyway, it indicated its extreme importance in everyday life. Due to these beneficial activities, bacteria are called friends of humanity.

This Article is based on by the lecture of  Dr. Mohammad Abdul Karim, Professor, Department of Botany, University of Dhaka.

A 1st year biology maven who try to conduct research using the scientific method to test the validity of a theory in a rational, unbiased and reproducible manner....... E-mail: opi.ferdous@gmail.com Minimum monthly resolution: Publish (1), Revise(4), Share (4).
Previous Organization & Structure of Genome: Genome Size
Next Bark and Lenticel: A Brief Discussion