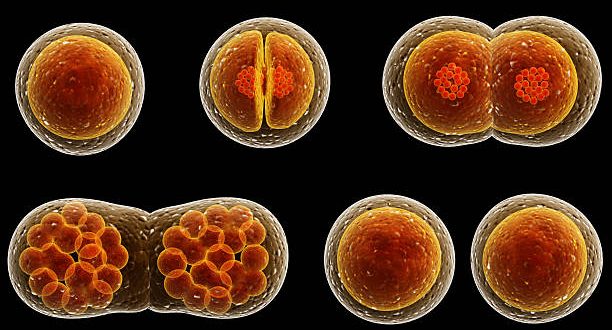 Cell division is the basic process by which a parent cell divides into two or more daughter cells. However, it occurs as a small part of a cell cycle. Both prokaryotic & eukaryotic organisms grow up and reproduce by this process.

There are three stages of cell division:

In conclusion, in the same species, the amount of DNA is-

Therefore, DNA replication or chromosome duplication occurs in interphase stage, not in prophase.

Cell cycle is the series of events that take place in a cell when it grows and divides. Howard & Pelc gave the cell cycle during 1953. They used the [3H] thymidine isotope for this reason. Subsequently, they observed  4 steps in the cell cycle:

In short, all these 4 steps are divided into 2 major stages:

This checkpoint is also known as the ‘spindle checkpoint’.

The time between the end of the telophase (end of forming new cells) and the beginning of the next M-phase is called interphase or I-phase. Subsequently, we can say, interphase is the preparation stage before cell division.

The gap between the end of telophase and the beginning of DNA synthesis is the G1 phase. Things that happen during this phase are as follows:

Nevertheless, if extracellular conditions are unfavorable, the G1 phase delays. Then the cell enters into a specialized resting state termed G0(G zero). However, in this state, the cell can remain for days, weeks, or even years. Many cells can stay in this state until the cell or the organism dies.

The part of the interphase where DNA is synthesized is S-phase.

Central components of the cell-cycle control system are members of a family of protein kinases. They are known as cyclin-dependent kinases or Cdks. The foremost vital of these Cdk regulators are proteins known as cyclin. There are four classes of cyclin classified by the cell cycle stage at which they bind Cdks and function. Three of these classes specifically work at three checkpoints of a cell cycle but one doesn’t.

This was easy and helpful.

Thank you so much

Thank you. Let me know if you need to add anything else here.

Very much reader friendly & well organized article. Thanks for sharing tricky studies in such an easy way.

Thanks a lot. Hope this is helpful for you..

I was looking for some explanation of cyclin and CDK protein function but the article was very informative and easy to read. Keep up the good work.

I’ll try to add more information about it. Thanks for letting me know.