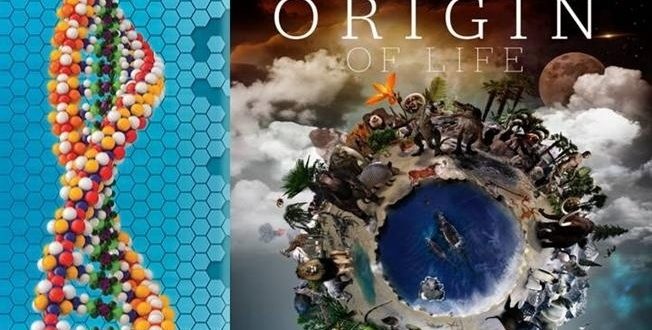 Chemical Evolution and Origin of Life

The origin of life on Earth is a scientific problem which is not yet solved. There are plenty of ideas, but few clear facts.

It is generally agreed that all life today evolved by common descent from a single primitive life form. It is not known how this early form came about, but scientists think it was a natural process which took place perhaps 3,900 billion years ago. It is not known whether metabolism or genetics came first.

Another big problem is how cells developed. All existing forms of life are built out of cells. Melvin Calvin, recipient of the Noble prize in chemistry wrote a book on the subject and so did Alexander Oparin what links most of the early work on the origin of life is the idea that before life began must have been a process of chemical change.

The earliest claimed lifeforms are fossilized microorgansms (or microfossils). They were found in iron and silica rich rocks. These rocks are as old as 4.28 billion years. If this is the oldest record of life on earth, it suggests an almost instantaneous emergence of life after oceans formed 4.4 billion years ago.

A scientific study from 2002 showed that geological formations of stromatolites (short sedimentary rocks grown by the deposition of cyanobacteria) 3.45 billion years old contain fossilized cyanobecteria. At that time it was widely agreed that stromatolites were oldest known life form on Earth which had left a record of its existence. Therefore, if life originated on Earth, this happened sometime between 4.4 billion years ago, when water vapours first liquified and 3.5 billion years ago. Earliest evidence of life comes from the Isua supercrustal belt in western Greenland and form similar foramtions in the nearby Akilia Islands. This is because a high level of the lighter isotope of carbon is found there. Living things uptake lighter isotopes because this takes less energy. Carbon entering into rock formation has a concentration of elemental C13  of about -5.5 of C12, biomass has C13 of between -20 and -30. These isotope finger prints are preserved in the rocks.

History of studies into the origin of life

Our current understanding of conditions on prebiotic Earth and the idea of a gradual chemical evolution toward life were first proposed between 1925 and 1930 independently by the Russian biochemist Alexander Ivanovich Oparin and the British scientist John B.S Haldane.

No real progress was made until 1924 when Alexander Oparin reasoned that atmospheric oxygen prevented the synthesis of the organic molecules. Organic molecules are the necessary building blocks for the evolution of life.

In his “The Origin Of Life”, Oparin argued that a “premodial soup” of organic molecules could be created in an oxygen less atmosphere through the action of sunlight. These would combine in ever more complex fashions until they formed droplets, These droplets would grow by fusion with other droplets and reproduce through fission into daughter droplets and so have a premitive metabolism in which those factors which promote “cell integrity” survive, those that do not become extinct. Many modern theories of the origin of life. Still take Oparin’s ideas as a starting point.

Around the same time J.B.S Haldane also suggested that the earth’s prebiotic oceans, which were very different from what oceans are now, would have formed a “hot dilute soup”. In this soup, organic compounds, the building blocks of life, could have formed. This idea was called biopsis, the process of living matter evolving from self replicating but non living molecules.

It started with an electric spark

Lighting may have provided the spark needed for life to begin.

Electric sparks can generate amino acids and sugars from an atmosphere loaded with water, methane, ammonia and hydrogen as was shown in the famous “Miller Urey Experiment” reported in 1953, suggesting that lighting might have helped creating the key building blocks of life on Earth in its early days. Over millions of years, larger and more complex molecules could form

Several people have suggested that the chemicals in the cell give clues as to what the early seas must have been like. In 1926, Macallum noted that  the inorganic composition of the cell cytosol dramatically differs from that of modern sea water. “The cell has endowments transmitted from a past almost as remote as the origin of life on earth. For example: All cells contain much more potassium, phosphate and transition metals than modern oceans, lakes, or rivers.” 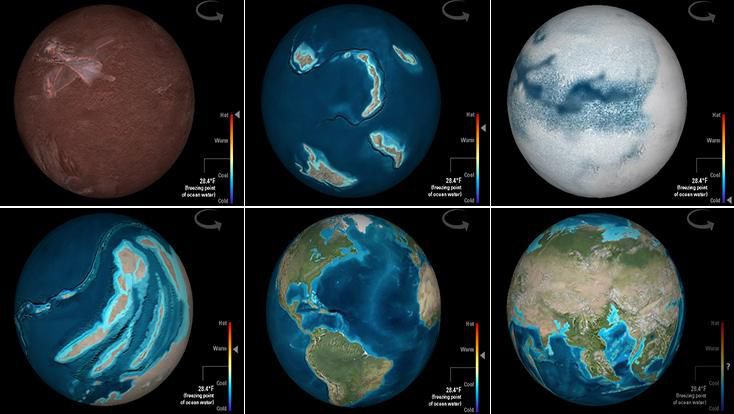 If life evolved in the deep ocean, near a hypothermal vent, it could have originated as early as 4 to 4.2 billion years ago. Any organic compounds produced by then would be altered or destroyed by temperature exceeding 300 degree centigrade. They estimate that the development of a 100 kilobase genome of a DNA/protein primitive heterotroph into a 7000 gene filamentous cyanobacterium would have required only 7 million years. Originally, the earth’s atmosphere had almost no free oxygen. It gradually changed to what it is today, over a very long time. The process began with cyanobacteria. They were the first organism to make free oxygen by photosynthesis. Most organisms today need oxygen for their metabolism.

There is no “standard model” on how life started. Most accepted models are built on molecular biology and cell biology.

Early on ribonucleic acids would have been catalysts, but later, nucleic acids are specialised for genomic use.

Molecules of life met on clay

The first molecules of life might have met on clay, according to an ideaa elaborated by organic chemist Alexander Graham Carins – Smith at the university of glasgow in Scotland.These surfaces might not only have concentrated these organic compounds together, but also helped organize them into patterns much like our genes do now.Genetics sequences in DNA are essentially instructions on how amino acids should be arranged in proteins.

In the 1970’s, Thomas  Gold proposed the theory that life first developed not on the surface of the Earth, but several kilometers below the surface. The discovery in the late 1990 s of nanobes (filamentous structures that are smaller than bacteria, but that may contain DNA in deep rocus) might support Gold’s theory.

It is now reasonably well established that microbial life is plentiful at shallow depths in the earth(up to five kilometers below the surface) in the form of extremophile archaea, rather than the better-known eubacteria (which live in more accessible conditions).

Self organization and Replication

Self-organization and self replication are the hall mark of living systems. Non- living molecules sometimes show those features under proper conditions. For example, Martin and Russel showed that cell membranes separating contents from the environment and self organization of self contained redox reactions are the most conserved attributes of living things.They argue that inorganic matter like that would be life’s most likely last common ancestors.

In this hypothesis, RNA is said to work both as an enzyme and as a container of genes. Later, DNA took over it’s genetic role.

The RNA world hypothesis proposes that life based on ribonucleic acid( RNA) predates the current world of life based on deoxyribonucleic acid (DNA), RNA and proteins. RNA is able both to store genetic information, like DNA, and to catalyze chemical reactions like enzyme. It may have supported pre-cellular life and been a major step towards cellular life.

This idea suggests that proteins worked as enzymes first, producing metabolism. After that DNA and RNA began to work as containers of genes.

This idea also has some evidences which supports this.

In this scheme membranes made of lipid bi-layers occur early on. Once organic chemicals are enclosed, more complex biochemistry is then possible.

This is an official account of this website. This ID holds articles from two categories. 1. Articles from our non-authors. 2. Articles of the authors whose IDs were deleted.
Previous Allopolyploidy: Mixing up Different Genomes
Next Genetic Controlled Male Sterility