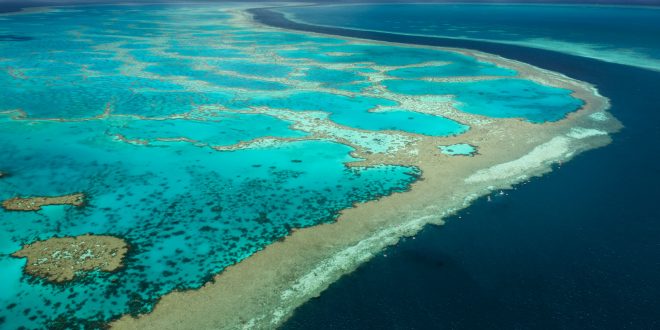 In this article, the types, formation and importance of Coral Reefs will be discussed in detail.

What are Coral Reefs?

On the basis of nature, structure and mode of occurrence coral reefs are of three types (classified by Charles Darwin in 1831) :


These three types are discussed below:

Coral reefs lying close to the shores of some volcanic island or parts of some continent are called fringing reefs or shore reefs. The fringing reef may extend to a distance of 200 metres from the shore into the sea. Its active growing region (called the reef front or reef edge) is facing the sea. A shallow water channel (50-100 meters broad) between shore and reef front is called reef flat. This reef is largely composed of calcium carbonate, coral sand, mud, dead and living coral colonies and other organisms.

The Barrier reef is located some distance away from the shore. It is 15 to 250 km away from shore and extends up to 2000 km in length. Reef and shore are separated by a deep stretch of water called lagoon (10-50 fathoms deep). This lagoon is suitable for navigation.

Example: The Great Barrier Reef of Australia is the largest barrier reef in the world.

Also called coral island or lagoon island. It is a ring-like or horse-shoe shaped reef that encircles a lagoon. The lagoon is very deep and is suitable for navigation. These reefs are more common in the Pacific Ocean. The ring-like reef may be broken in a few places to allow the free flow of water.

Example: Fiji Atoll, Trent Atoll of W-Carolinas, Suvadivo in the Maldives (biggest Atoll in the world), Funafoothis Atoll of Ellice.

Many theories have been put forward to explain the formation of coral reefs. Among them two theories are more important:

According to this theory, reefs start as fringing reefs on the sloping shore of an island. These fringing reefs by the subsidence of the reef flat into lagoon become barrier reefs. Gradually the island is sunk and ultimately vanished and thus barrier reefs become attols with a central lagoon.

The theory is supported by Dana and Davis.

In the last glacial period, the formation of ice caps lowered the level of water in the ocean (60 to 70 metres). At that time extreme cold temperatures prevailed. Subsequently, the ice melted and the tem­perature rose, which is suitable for the development of reefs. Thus Barrier reefs and Atolls are formed.

Coral reefs are of great importance. Some of the importances are given below:

To conclude, coral reefs bear such significance in both economy and ecosystem that is beyond our knowledge and there are yet many things to discover.

I, Shraboni Mostofa, am currently studying B.S. Honours (2nd year) in Department of Botany, University of Dhaka. I have the interest to work in the biological research field as a scientist. I want to contribute to the world something that really matters. I am always trying to improve myself as a good creation of the Great Creator. Email: shrabonimostofa@gmail.com. Minimum monthly resolution: Publish (1), Revise (1), Share (1).
Previous Soil as A Medium for Plant Growth
Next Concept of Soil Fertility

I very much appreciate your support.