DNA replication in eukaryotes is a complex and unique process involving many enzymes and thousands of ORI at a single time. Unlike the prokaryotic DNA, it involves a linear mode of replication.

Why does linear DNA replication involve  multiple origins at a time?

The large linear chromosomes in eukaryotic cell contain far too much DNA to be replicated speedily from a single origin. Eukaryotic replication proceeds at a rate ranging from 500 to 5000 nucleotides per minute at each replication fork (considerably slower than bacterial replication). Even at 5000 nucleotides per minute at each fork, DNA synthesis starting from a single origin would require 7 days to replicate a typical human chromosome consisting of 100 million base pairs of DNA. The replication of eukaryotic chromosomes actually occurs in a matter of minutes or hours, not days. This rate is possible because replication takes place simultaneously from thousands of origins.

Although the process of replication includes many components, they can be combined into three major groups:

In DNA synthesis, new nucleotides are joined one at a time to the 3′ end of the newly synthesized strand. Why?

DNA polymerases, the enzymes that synthesize DNA, can add nucleotides only to the 3′ end of the growing strand (not the 5′ end), so new DNA strands always elongate in the same 5′-to-3′ direction. 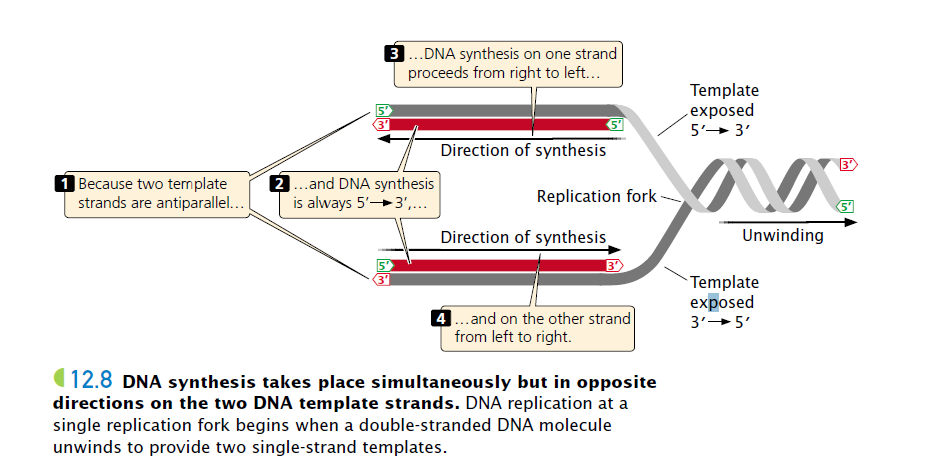 (Because the two single stranded DNA templates are antiparallel (meaning: one is from 5′ to 3′ and another is from 3′ to 5′) and strand elongation is always 5′ to 3′, if synthesis on one template proceeds from, say, right to left, then synthesis on the other template must proceed in the opposite direction, from left to right.)

Before starting this part of the article, understand the followings:

After DNA has been unwound by helicase, the single stranded nucleotide chains have a tendency to form hydrogen bonds and reanneal (stick back together).

In eukaryotes, the functions of these both enzymes are performed by topoisomerases.

A primer is a short strand of single stranded RNA which has both 5′ and 3′ end. An enzyme called primase synthesizes primers to get DNA replication started.

So, at the point where replication starts, primers are added to start the function of DNA polymerase enzymes.

After DNA is unwound and a primer has been added, DNA polymerases elongate the growing chain by adding nucleotides one by one.

As the DNA unwinds, the template strand that is exposed in the 3′ to 5′ direction (the lower strand in the figure) allows the new strand to be synthesized continuously in the 5′ to 3′ direction. This new strand, which undergoes continuous replication, is called the leading strand.

The other template strand is exposed in the 5′ to 3′ direction (the upper strand in the figure). After a short length of the DNA has been unwound, synthesis must proceed 5′ to 3′; that is, in the direction opposite that of unwinding.

Because only a short length of DNA needs to be unwound before synthesis on this strand gets started, the replication machinery soon runs out of template. By that time, more DNA has unwound, providing new template at the 5′ end of the new strand.

DNA synthesis must start anew at the replication fork and proceed in the direction opposite that of the movement of the fork until it runs into the previously replicated segment of DNA. This process is repeated again and again, so synthesis of this strand is in short, discontinuous bursts. The newly made strand that undergoes discontinuous replication is called the lagging strand.

The short lengths of DNA produced by discontinuous replication of the lagging strand are called Okazaki fragments, after Reiji Okazaki, who discovered them.

The DNA polymerase I replaces the Primers (RNA nuclotides) and replaces them with dNTPs. But still after removing the ligases, nicks remain present between each two Okazaki fragments. And here DNA ligase comes into play. It attaches the okazaki fragments and make the strands continuous.

In some DNA molecules, replication is terminated whenever two replication forks meet. In others, specific termination sequences block further replication.

Currently in 4th year (Hons) in the Department of Botany, University of Dhaka. Planned to have multiple careers one by one but promised to be with 'Plantlet' as long as it's primary stage remains unfinished. Email: abulaisshomrat@gmail.com. Minimum monthly resolution - Publish (1), Revise (3), Share (5)
Previous Replication in Circular DNA: Theta Model
Next Cytotaxonomy: Study of Chromosome Structure