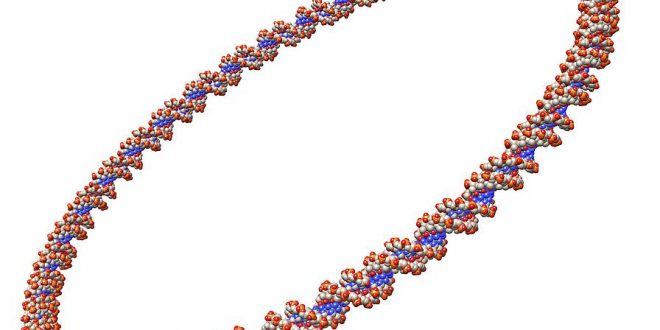 Circular Dna Molecule is a photograph by Alfred Pasieka/science Photo Library which was uploaded on September 28th, 2018.

Replicon and Origin of Replication (ORI)

A common type of replication that takes place in circular DNA, such as that found in E. coli and other bacteria, is called theta replication because it generates a structure that resembles the Greek letter theta (θ).

In theta replication, double-stranded DNA begins to unwind at the replication origin, producing single-stranded nucleotide strands that then serve as templates on which new DNA can be synthesized. The unwinding of the double helix generates a loop, termed a replication bubble. Unwinding may be at one or both ends of the bubble, making it progressively larger. DNA replication on both of the template strands is simultaneous with unwinding.

The point of unwinding, where the two single nucleotide strands separate from the double-stranded DNA helix, is called a replication fork.

If there are two replication forks, one at each end of the replication bubble, the forks proceed outward in both directions in a process called bidirectional replication, simultaneously unwinding and replicating the DNA until they eventually meet. If a single replication fork is present, it proceeds around the entire circle to produce two complete circular DNA molecules, each consisting of one old and one new nucleotide strand.

John Cairns`famous experiment showed that the replication of DNA is highly coordinated process. In his experiment Cairns made the DNA of E.Coli  radioactive by growing them in a medium containing Thymidine lebelled with tritium 3H.

Then the isolated DNA was spread and overlaid with a photographic emulsion for several weeks. The Thymidine residues generated tracks of the silver grains in the emulsion producing image of DNA molecule.

From John Cairns Experiment on E. coli it was found that-

Currently in 4th year (Hons) in the Department of Botany, University of Dhaka. Planned to have multiple careers one by one but promised to be with 'Plantlet' as long as it's primary stage remains unfinished. Email: abulaisshomrat@gmail.com. Minimum monthly resolution - Publish (1), Revise (3), Share (5)
Previous Chromosome Number: A Great Tool in Taxonomic Studies
Next DNA Replication in Eukaryotes: Linear Replication

This article is ranked on the first place of google for keyword ‘theta model of replication’. Congrats vaiya!

Something new to read. Feels great💙. Thanks Vai for sharing with us.