To discuss about the topics we first have to know about

The interaction of genes may be of following types

2)Epistasis, one gene hides effect of other

4) Duplicate genes-15:1 (same effect given by either of two genes) 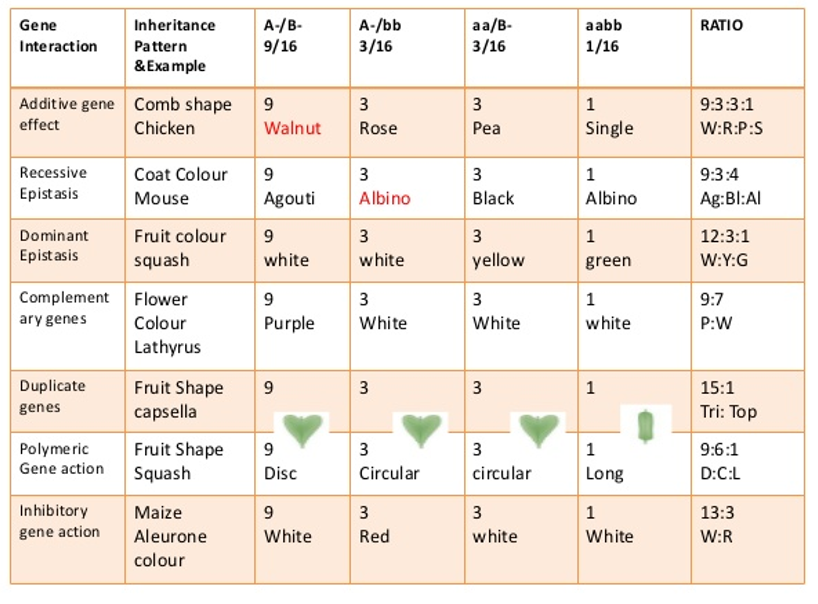 Recessive alleles at one locus (aa) mask the phenotypic expression of other gene locus (BB, Bb or bb) such epistasis is called recessive epistasis. The alleles of ‘B’ locus express themselves only when epistatic locus ‘A’ has dominant allele like AA or Aa. The phenotypic ratio is 9: 3: 4.

Complete dominance at both gene pairs, but one gene, when homozygous recessive, is epistatic to the other.

Interaction: homozygous albino is epistatic to aguoti and black.

Coat colour is controlled by Gene A, Allele A is hypostatic

Agouti( wild type most common ) due to banded hair: Near

The c locus is epistatic  to the A locus. 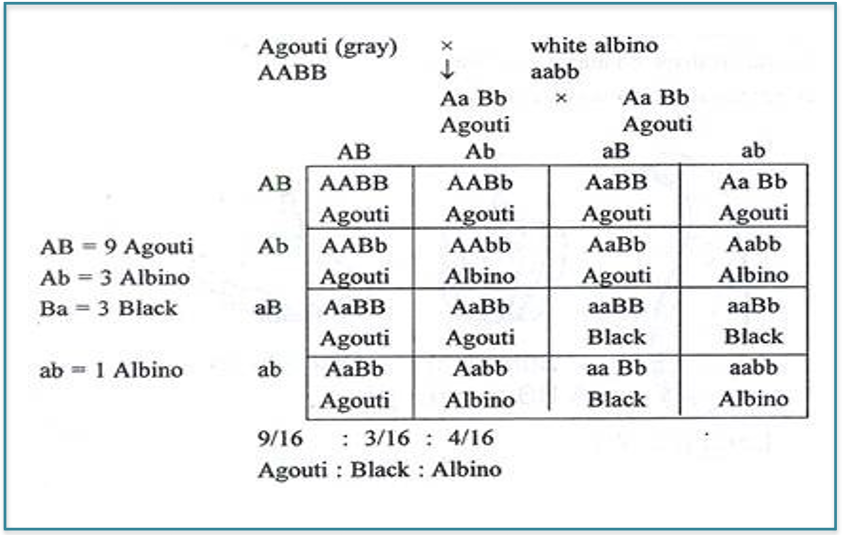 If both gene loci have homozygous recessive alleles and both of them produce identical phenotype the F2 ratio 9:3:3:1 would be 9:7. The genotype aaBB, aaBb, AAbb, Aabb and aabb produce same phenotype. Both dominant alleles when are present together only then they can complement each other. This is known as complementary gene.

Complete dominance at both gene pairs, but either recessive homozygote is epistatic to the effect of the other gene.

A Cross Producing a 9:7 Ratio 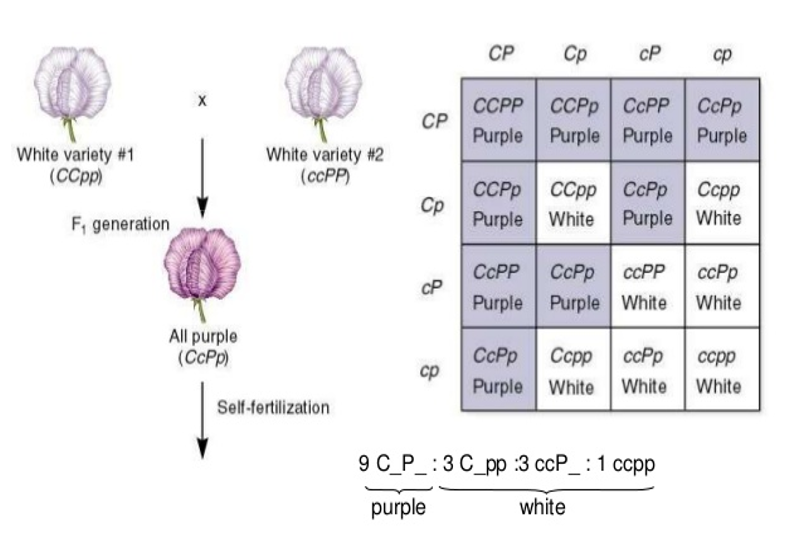 Complementary gene action- interactions arise because the two genes encode proteins that participate in sequence in a biochemical pathway.

Enzyme C and enzyme P cooperate to make a product, therefore they complement one another. 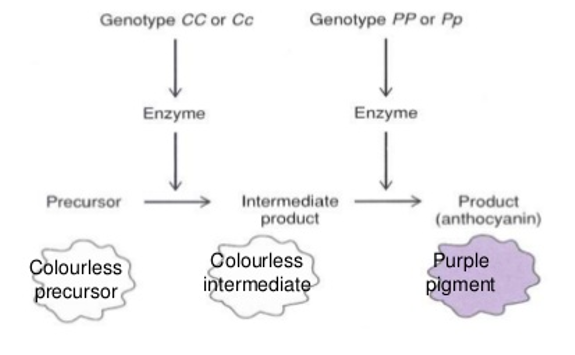 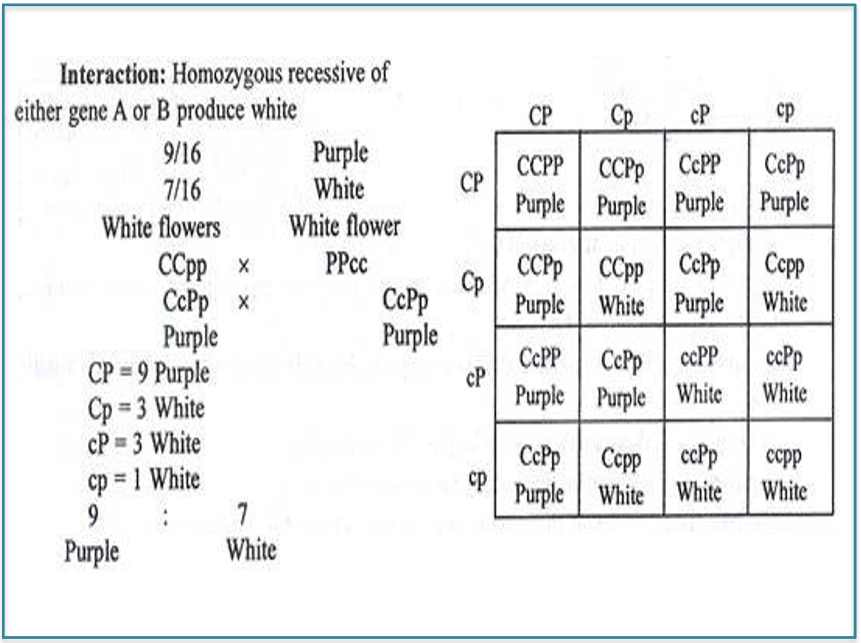 Certain phenotypic traits depend on the dominant alleles of two gene loci. When dominant is present it will show its phenotype. The ratio will be 9: 6: 1.

Complete dominance at both gene pairs, interaction between both dominance to give new phenotypes. 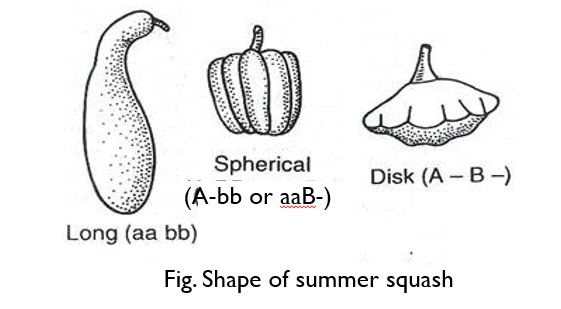 Interaction at ‘AB’ when present together, form disc-shaped fruit. 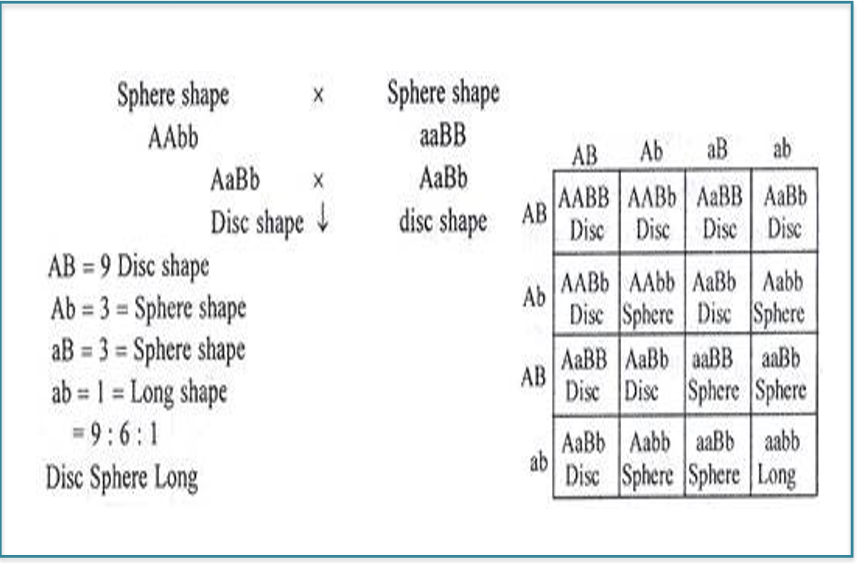 Complete dominance at both gene pairs, but one gene, when dominant, epistatic to the other.

Dominant white hides the effect of yellow or green.

If a dominant allele of both gene loci produces the same phenotype without cumulative effect, i.e., independently the ratio will be 15:1.

Complete dominance at both gene pairs, but either gene when dominant, epistatic to the other. 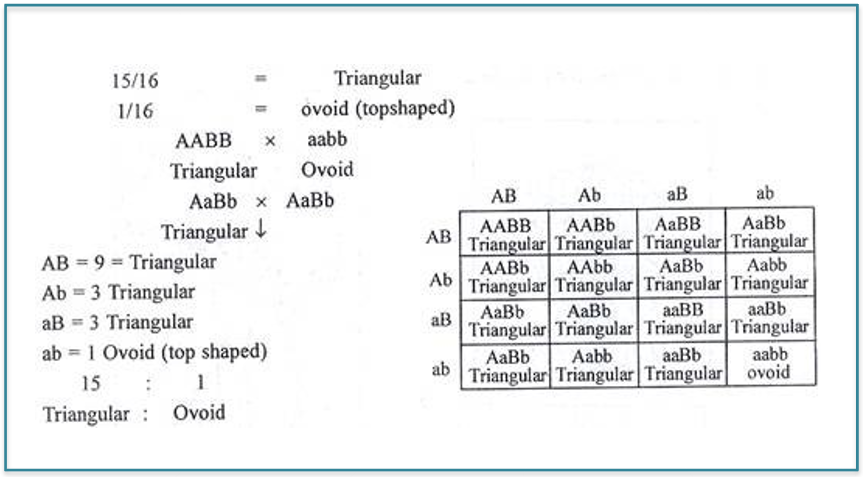 Gene pair ‘A’: colour inhibition is dominant to colour appearance.

Gene pair ‘B’: colour is dominant to white 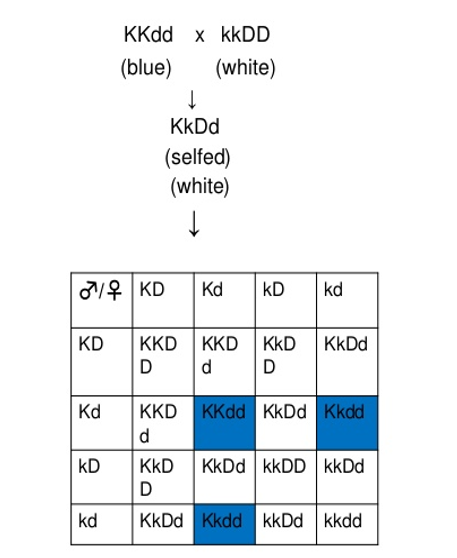 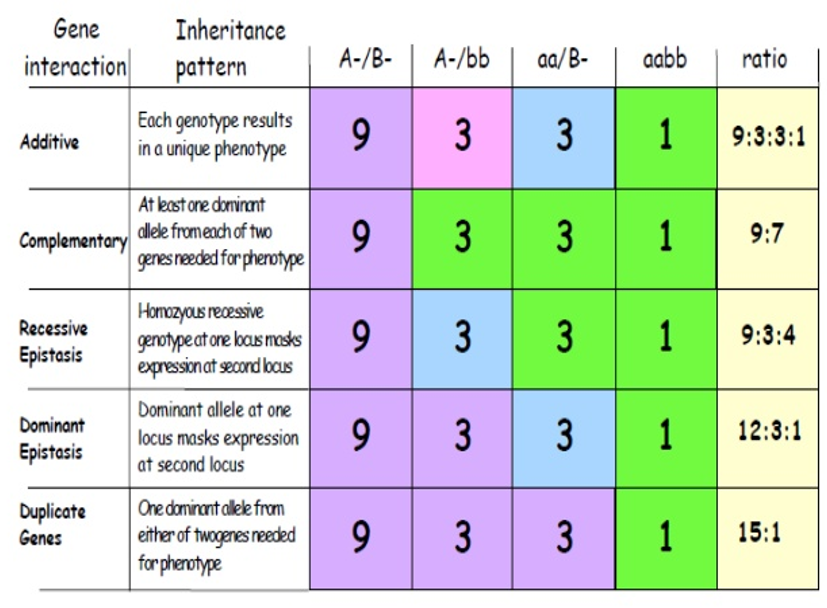 A single gene may affect many phenotypic characters

a. Affects the type of hemoglobin produced

b. Affects the shape of red blood cells

e. Is related to susceptibility to malaria 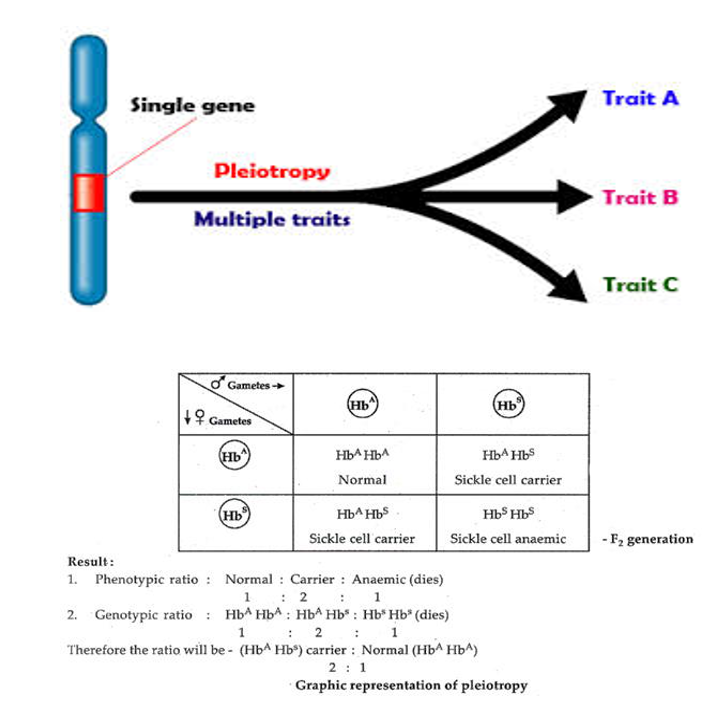 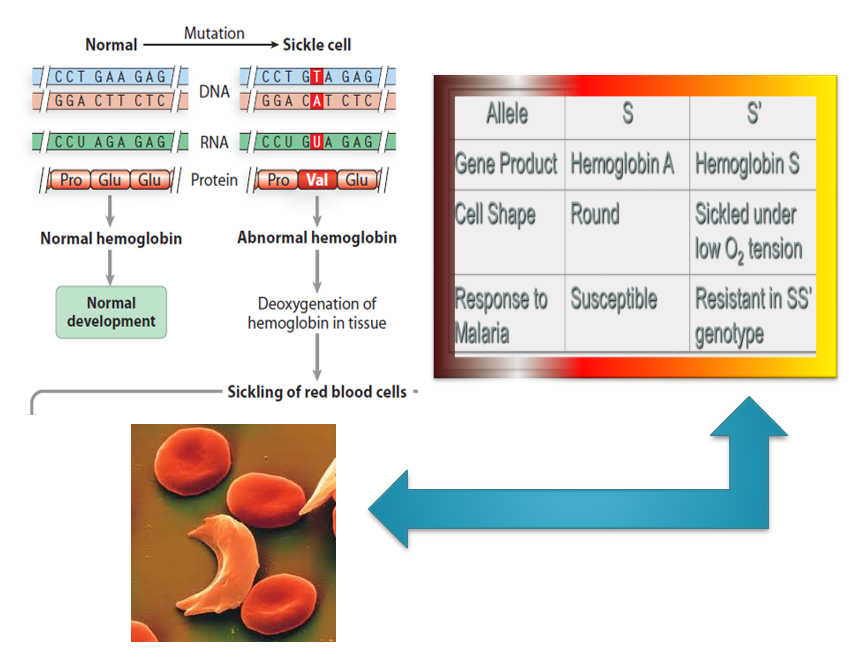 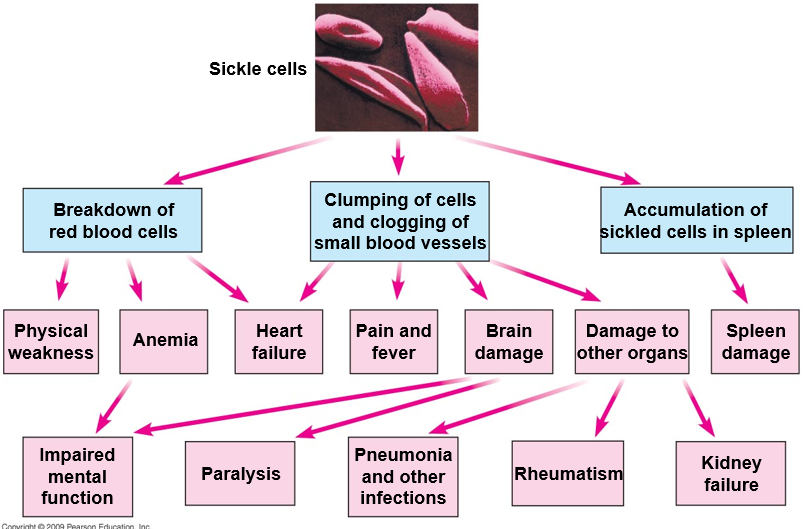 By this we have finished the second topic of 2nd year Fundamental Genetics course.

Previous Exceptions of Mendelism: First Law
Next Sulphur Cycle & Microbial Role in It