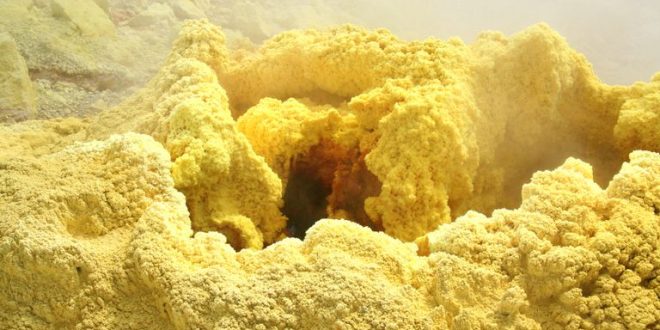 Sulphur Cycle & Microbial Role in It

The sulfur cycle is the collection of processes by which sulfur moves between rocks, waterways and living systems. Such biogeochemical cycles are important in geology because they affect many minerals. Biochemical cycles are also important for life because sulfur is an essential element, being a constituent of many proteins and cofactors, and sulfur compounds can be used as oxidants or reductants in microbial respiration.[1]

Sulfur, a reactive element with stable valence states from -2 to +6 is among the most abundant elements in the earth’s crust. It has four main oxidation states in nature, which are -2, +2, +4, and +6. The common sulfur species of each oxidation state are listed as follows:

In living organisms, sulfur occurs mainly as sulfhydryl (-SH) groups in amino acids (e.g. Cysteine) and their polymers. Plants, algae and many heterotrophic microorganisms assimilate sulfur in the form of sulfate for incorporation into cysteine, methionine and coenzymes in the form of sulfhydryl (-SH) groups, sulfate needs to be reduced to sulfide level by assimilatory sulfate reduction.

In the marine environment, a major decomposition product of organosulfur is dimethyl sulfide (DMS, (CH3)2S). This product originates from dimethylsulfoniopropionate (DMSP), a major metabolite of marine algae that may have a role in osmoregulation.

In the presence of oxygen,

Sulfur globules are deposited within the cells of bacteria. In the absence of H2S, these globules are slowly oxidized to sulfate. Read more.

Some other members of the genus Thiobacillus species produce sulfate from the oxidation of elemental sulfur and other inorganic sulfur compounds.

These Thiobacillus species are acidophilic, grow well at pH 2-3, and are obligate chemolithotrophs, obtaining their energy exclusively from the oxidation of inorganic sulfur and their carbon from the reduction of carbon dioxide. Most Thiobacillus species are obligate aerobes requiring oxygen for the oxidation of inorganic sulfur compounds.

Thiobacillus denitrificans however can utilize nitrate ions as terminal electron acceptors in the oxidation of inorganic sulfur compounds.

Sulfur oxidation produces a substantial amount of strong mineral acid. Within soils, this can lead to solubilization and mobilization of phosphorus and other mineral nutrients with a generally beneficial effect on both microorganisms and plants. The activity of Thiobacillus thiooxidans may be used for adjusting soil pH. T. thiooxidans and T. ferrooxidans are used in microbial mining operations.

Elemental sulfur can be used in the respiratory process. Desulfuromonas acetoxidans grow on acetate anaerobically. It uses elemental sulfur instead of oxygen in its energy-producing metabolism.

2. Reduction of S by Hydrogen gas

From submarine hydrothermal vent environments, extremely thermophilic anaerobic archaea were isolated that are capable of sulfur respiration with hydrogen gas. Several species of Thermoproteus, Pyrobaculum and Pyrodictium were described to carry out this chemolithotrophic reaction. Pyrodictium occultum is the most thermophilic member of the group, having an optimal growth temperature of 110 C. It is probably an advantage for these extreme thermophiles that sulfur is present in hydrothermal vent regions in a molten state, whereas at room temperature it is a hydrophobic solid. Sulfur respiration occurs with molecular hydrogen.

Currently in 4th year (Hons) in the Department of Botany, University of Dhaka. Planned to have multiple careers one by one but promised to be with 'Plantlet' as long as it's primary stage remains unfinished. Email: abulaisshomrat@gmail.com. Minimum monthly resolution - Publish (1), Revise (3), Share (5)
Previous Exceptions of Mendelism: Second Law
Next Ecological Succession