Female Gametophyte: The Embryo Sac with Its Types

The angiosperm female gametophyte is critical for plant reproduction. It contains the egg cell and central cell that become fertilized and give rise to the embryo and endosperm of the seed, respectively. Female gametophyte development begins early in ovule development with the formation of a diploid megaspore mother cell that undergoes meiosis producing four cells together called megaspore tetrad.

Depending on the number of megaspore nuclei taking part in the development, the female gametophytes of angiosperms may be classified into three main types: monosporic, bisporic, and tetrasporic.

In the first, only one of the four megaspores takes part in the development of the gametophyte. It is most common. In the second, two megaspore nuclei take part in its formation; and in the third, all four of them.

The monosporic 8-nucleate embryo sac, formed by three divisions of the functioning megaspore, occurs in at least 70 per cent of the angiosperms now known.

The enlargement of the megaspore is always accompanied by increased vacuolation, one large vacuole usually appearing on either side of the nucleus in the direction of the long axis of the cell. After the first division has taken place, the two daughter nuclei move apart to opposite poles. Most of the cytoplasm is aggregated around them and the rest forms a thin peripheral layer, the center being occupied by a large vacuole.

Of the 8 nuclei arising in this manner, 3 at the micropylar end give rise to the egg and two synergids; 3 at the chalazal end give rise to antipodal cells; 2 and the remaining 2, one from each pole, fuse in the center to form a secondary nucleus.

Geerts, in 1908, found that in Oenothera lamarckiana the embryo sac is usually formed by the micropylar megaspore of the tetrad, which undergoes only two nuclear divisions instead of the usual three occurring in the Polygonum type of embryo sac.

In this way, 4 nuclei are produced which organize into the two synergids, the egg, and a single polar nucleus. Since the third division is omitted and all the nuclei are situated in the micropylar part of the developing embryo sac, there is neither a lower polar nucleus nor any antipodal cells.

The bisporic embryo sacs are typically 8-nucleate (“Allium type”) and arise from one of the two dyad cells formed after Meiosis I. Since no wall is laid down after Meiosis II and both the megaspore nuclei formed in the functional dyad cell take part in the development of the embryo sac, only two further divisions are necessary to give rise to the 8-nucleate stage.

A bisporic embryo sac was first described in Allium fistulosum (Strasburger, 1879) and has since been confirmed in several species of this genus (Weber, 1929; Messeri, 1931; Jones and Emsweller, 1936; and others).

The megaspore mother cell divides to form two dyad cells, of which the upper is much smaller and soon degenerates. The nucleus of the lower divides to form 2, 4 and then 8 nuclei, which give rise to an embryo sac with the usual organization.

There are seven types considering whether does nuclear fusion take place or not.

The Adoxa type, formerly known as “Lilium type,” is characterized by all 4 megaspore nuclei undergoing just one more division to form an 8-nucleate embryo sac having a normal egg apparatus, three antipodal cells, and two polar nuclei (Fig. 78). It was described for the first time by Jonsson (1879-1880) in Adoxa moschatellina and later by Lagerberg (1909) and Fagerlind (1938a).

The embryo sac of Plumbago capensis, described by Haupt (1934), may be presented as a representative of the Plumbago type.

The 2- and 4-nucleate stages are normal, and the 4 megaspore nuclei, which are arranged in a crosswise fashion, undergo a further division resulting in 8 free nuclei arranged in four pairs, One nucleus of the micropylar pair is now cut off to form the lenticular egg cell. Of the remaining 7 nuclei, 4 (presumably one member of each of the original four pairs) undergo a slight increase in size and gradually approach one another, functioning as polar nuclei. The remaining 3 nuclei degenerate at their original places, but occasionally 1, 2, or all 3 of them are cut off at the periphery to form cells which may persist and assume an egg-like appearance; synergids are entirely absent.

Here the 16 nuclei lie in four distinct quarters which are arranged crosswise, one at each end of the embryo sac and two at the sides. Now 3 nuclei of each quartet become cut off as cells, while the fourth remains free and moves to the center. There are thus four “triads” and four polar nuclei. As a rule, the egg cell of the micropylar “triad” alone is functional, although the others often look very similar.

Campbell (1899«,o; 1901) and Johnson (1900) reported that in Peperomia pellucida each of the 4 megaspore nuclei divides twice, resulting in a total of 16 nuclei which become more or less uniformly distributed in the rather thick layer of cytoplasm lying at the periphery of the embryo sac.

According to Johnson, 2 nuclei at the micropylar end now become organized to form the egg and a synergid, 8 fuse to form the secondary nucleus, and the remaining 6 are cut off at the periphery of the embryo sac.

According to Campbell, on the other hand, 1 to 3 nuclei in the vicinity of the egg show a more or less evident aggregation of cytoplasm around them and are to be regarded as the equivalents of syergids; approximately 8 nuclei enter into the formation of the secondary nucleus; and the remaining 4 to 6 nuclei are cut off as antipodal cells.

A 16-nucleate embryo sac of a different nature was recorded by Hakansson (1923) in Drusa oppositifolia, a member of the family Umbelliferae. After the meiotic divisions are over, three of the megaspore nuclei pass down to the basal end of the embryo sac, and only one remains at the micropylar end.

This 1+3 arrangement is followed by a 2+6 and then a 4 + 12 stage. The four micropylar nuclei give rise to the egg apparatus and upper polar nucleus, and the 12 chalazal nuclei to a lower polar nucleus and 11 antipodal cells.

Following the work of Treub and Mellink (1880) on Lilium bulbiferum, several other investigators, notably Strasburger, Mottier, Guignard, Coulter, and Sargant, studied a number of species of this genus and repeatedly confirmed that the 4 megaspore nuclei undergo only one division to give rise to the 8 nuclei of the mature embryo sac.

Bambacioni (1928) showed that in Fritillaria and Lilium the formation of the 4 megaspore nuclei is not followed directly by the 8-nucleate stage but by a secondary 4-nucleate stage, in which the 2 chalazal nuclei are much larger than the micropylar. This comes about in a very peculiar manner. At first there is a 1+3 arrangement of the megaspore nuclei so that the 3 chalazal nuclei come to lie very close to each other. During the next stage the micropylar nucleus divides normally, but the three chalazal spindles fuse to form a single common spindle, so that at the close of the division there are two haploid nuclei at the micropylar end and two triploid nuclei at the chalazal. One more division occurs, resulting in 8 nuclei, of which the 4 chalazal nuclei are triploid and the 4 micropylar are haploid.

The mature embryo sac thus consists of three haploid cells (the egg and two synergids), three triploid cells (the antipodals), and a tetraploid secondary nucleus formed by the fusion of the two polar nuclei, one haploid and the other triploid.

In this type also, which has so far been reported only in Plumbagella micrantha (Fagerlind, 19386; Boyes, 1939), the 4 megaspore nuclei take up a 1+3 arrangement, and a large vacuole separates the 3 chalazal nuclei from the micropylar nucleus.

The former gradually approach one another and eventually fuse to give rise to a single triploid nucleus. This results in a secondary 2-nucleate stage, followed by a secondary 4-nucleate one, in which the 2 micropylar nuclei are haploid and the chalazal are triploid.

There are no further divisions. The nucleus nearest the micropylar end organizes into the egg; the triploid nucleus nearest the chalazal end forms the single antipodal cell; and the remaining nuclei, one haploid and the other triploid, fuse to form a tetraploid secondary nucleus.

All Types All Together 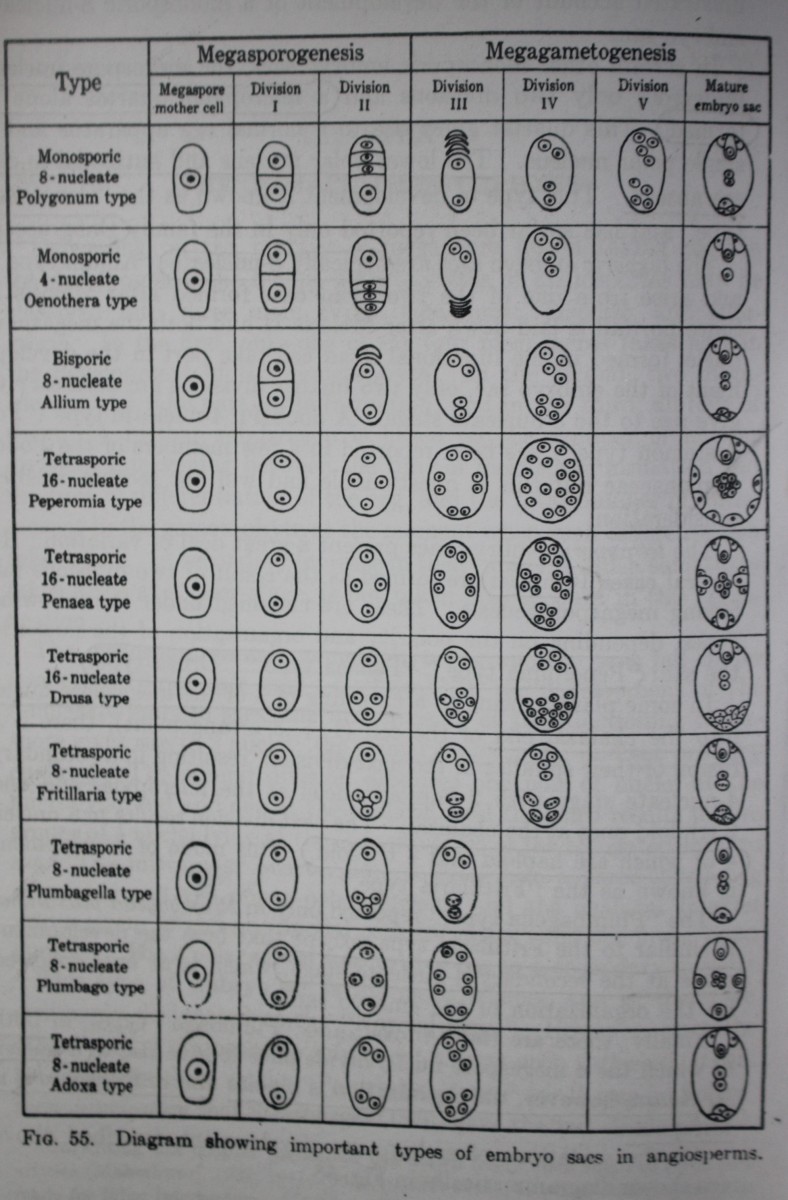 Currently in 4th year (Hons) in the Department of Botany, University of Dhaka. Planned to have multiple careers one by one but promised to be with 'Plantlet' as long as it's primary stage remains unfinished. Email: abulaisshomrat@gmail.com. Minimum monthly resolution - Publish (1), Revise (3), Share (5)
Previous Nemec Phenomenon: Embryo Sac Like Pollen Grain
Next Steps of Fertilization