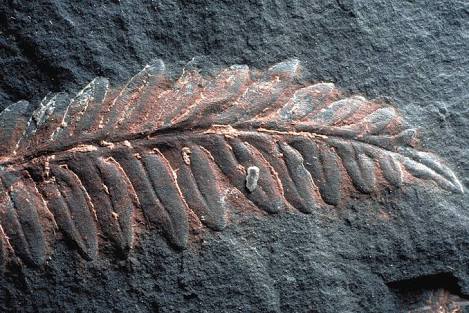 Mainly there are two theories how plants become fossil.

Infiltration theory is based on the fact that mineral matters are infiltrated and precipitated in the cell wall in the buried plant and plant parts undergoing partial disintegration resulting in the release of free carbon which reduces the sulfides present in water and leads to the formation of carbonates of Ca, Mg and Fe. Finally silica and other compounds are deposited within the cell walls through infiltration and precipitation.

The process is entirely dependent upon the preserve of organic materials within the cell wall.

According to this theory, the original substance of the plant body is replaced molecule by molecule in solution.

There are some instances where the complete replacement has taken place. These replacement are due to complete hydrolysis of any type of organic substances except perhaps the cell wall material particularly lignin and cellulose.

This replacement is gradual and supposed to be completed where lignin and suberin remain. The organic substances gradually diminished due to chemical breakdown and molecule by molecule replacement by any mineral substance like pyrite, lime carbonate or silica.

Considering the chemical aspects, it appears that the idea of replacement is misleading. If silicon shows any strong affinity for organic compounds, it must build up organic silicates which perhaps not found in the petrified wood. Therefore, the role of silica in replacement process seems untenable.

Thin sections are prepared from petrified plant materials and then grinded till they attain the requisite thickness and become translucent. Thus making the cellulose frame work for the tissues clear.

Peel technique is a method by which serial sections can be taken out form petrified specimen.

During this process, the surface of the material is cleaned with a mineral acid and then a commercial acetate film or solution of nitrocellulose is spread over the surface and is peeled of when dried.

This technique is also used for excellent result on compression particularly minerals with calcide bituminous and anthracoles and fine grained minerals.

It is commonly used in case of peat, lignite and coal.

During this process, the specimens are treated with mineral acids or other suitable reagents which separates large fragments or even complex organs of fossil plants from the rocks of microscopic importance.

This technique is very important for study of spores and pollen grains.

Transfer is most suitable for study of compression.

During this process, plant fragment is freed from associated rock and cemented to a glass slide. The exposed surface of the slide is coated with paraffin wax. Then it is treated with some mineral acid to remove mineral matter.

The specimen after being washed , dehydrated and mounted is ready for study.

In this method, the specimen is kept for few weeks in hydrofluoric acid and KCl, and then treated with a mixture of equal volume of phenol and 95% alcohol.

Finally, it is embedded and sectioned with microtome. But because of prolonged process of demineralizing and embedding, the method hasn’t received wide recognition.

In this technique, the specimen of plant fragments are removed with microvibrating machine or with a small hammer and a steel needle.

Although the process is slow and tedious, sometimes it gives excellent result for the minute leaves and sporangiophores particularly for the genus Calamophyton.

This technique showed the presence of cellulose and lignin in the cell wall but not commonly used due to complex equipments and other intricate procedure involved.

This is used to study the xylem elements of Lepidodendron.

The plant fossil when photographed by x-rays show differential shadows corresponding the density.

A shadow picture taken by a sensitized film that is known as radiography can be used for their study.

This technique is used to study certain calcified seeds.

The basic principal of chemical method is to identify the constituents of the fossil plants.

This method is proved valuable in tracing the presence of chlorophyll and haemoglobin particularly chlorophyll in carbonaceous sediments.

And can be used to study the isotopes of carbon and its related products.

Determination of age of fossils

This technique was developed early in the century in the university of Cambridge.

Uranium and Thorium are found most frequently in igneous rock while Potassium 40 is the component of sedimentary rock. When the radio isotopes of Uranium and Thorium disintegrate, they ultimately produce a stable form of Pb and He and heat. Thus Uranium 236 after passing through 14 intermediate radioactive stages will yield Pb 206, He and heat. The rate at which 1 gram of Uranium 236 decays into Pb 206 is 1/7.6 million.

Knowing this constant rate of decay, it is clear that the ratio of Pb to the remaining Uranium can be used to determine the age of the rocks.

The other way of describing the same idea is to express the ratio of decay in terms of the half radio isotope. Uranium 238 has a half life of 4.5*10^3 or 4500 million years or 4.5 billion years. If the Pb 206 spegmatite is the product of the decay of Uranium 238 from the time the pegminte was formed , then the ratio of Uranium238 to Pb206 will give an indication of the age of the rock.

To this theory, the age of the earth is estimated 4700 my.

Usually paleobotanists feel more comfortable in making absolute age determination of sedimentary rock containing fossil by using Potassium-Argon dating method because potassium containing minerals are a part of deposited material in which the specimen is embedded.

Argon makes up 12% of the n-product of decaying whereas Ca makes up 88%.

Measurements of the known amount of Argon derived from a unit of 40K in a specific amount of time will give a fair accurate dating of sedimentary rocks.

By comparing the proportion of K-40 to Ar-40 in a sample of rock containing fossil, and knowing the decay rate of K-40, the date that the rock was formed can be determined.

Currently in 4th year (Hons) in the Department of Botany, University of Dhaka. Planned to have multiple careers one by one but promised to be with 'Plantlet' as long as it's primary stage remains unfinished. Email: abulaisshomrat@gmail.com. Minimum monthly resolution - Publish (1), Revise (3), Share (5)
Previous Methods Of Vegetation: Quantitative
Next Introduction Of Paleobotany