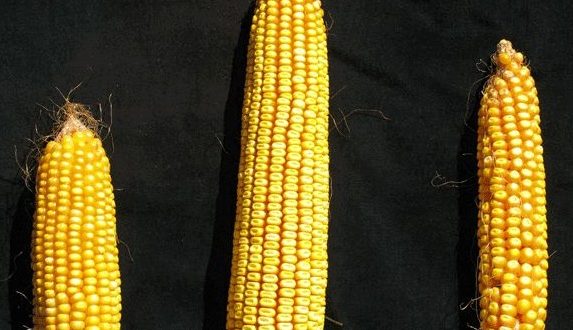 Heterosis Breeding: Being Better Than Parents

Heterosis means deviation of the characteristics of offspring from the actual characters of parents.

Heterosis is often called true heterosis or euheterosis. It may be defined as the superiority of an F1 hybrid over both of its parents in terms of yield or some other characters (vigorous, sturdier, taller etc.). Hybrid vigour has been used as a synonym of heterosis.

On the basis of source of increased vigour, heterosis is divided into 3 types-

It is true heterosis. It arises due to over-dominance gene action i.e heterozygotes over both the corresponding homozygotes.

Sometimes due to more favourable environment and better cultural practices, the increased growth and vegetative luxuriance are observed in plants which is referred to as pseudo-heterosis. This is a temporary vigour and an accidental occurrence and therefore, can not be utilized in practical plant improvement.

This hypothesis was first proposed by Davenport in 1908. It was later expanded by Bruce and by Keeble and Pellew in 1910.

In heterozygous state, the deletorious effects of recessive alleles are masked by their dominant alleles.

So heterosis or hybrid vigor results from bringing together the maximum number of dominant favorable genes in the F1 hybrid. 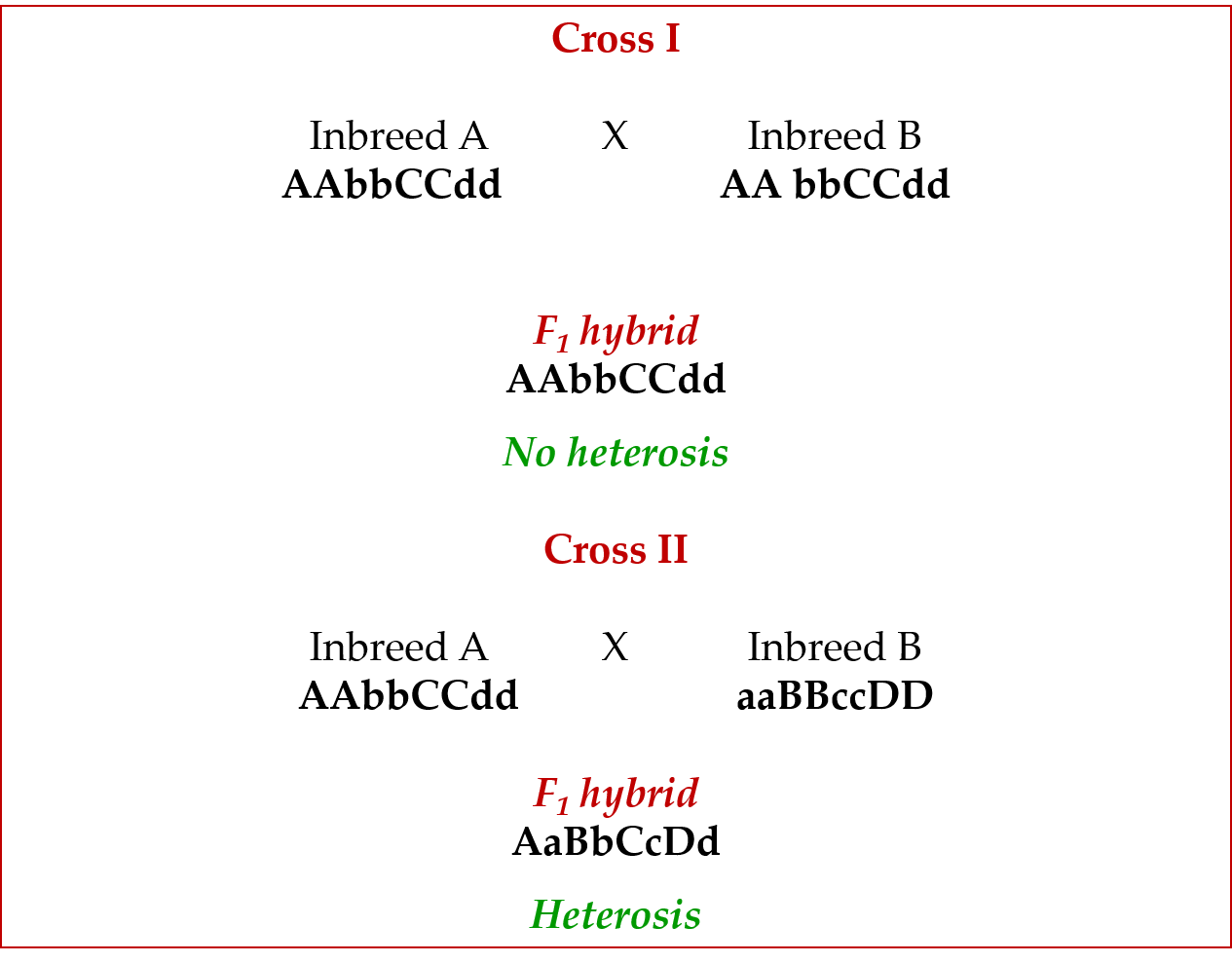 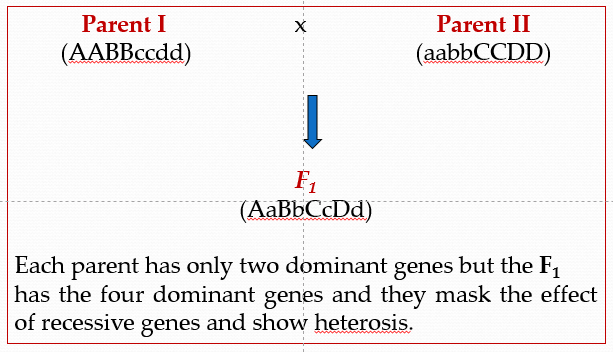 The concept of this hypothesis was given independently by Shull and East (1908).

Several names were given like “Super-dominance” by Fisher, “Interaction of alleles at a single locus” by East and over-dominance by Hull.

Ashby (1930) studied the inbreeds and hybrids of maize and tomato and concluded that the hybrid vigour is due to an increased initial embryo size which he termed as “greater initial capital”.

The validity of this cause however, is disputed by many workers.

East (1936) and Wang (1947) also supported this hypothesis and reported that the increase in endosperm and embryo size is one of the causes of heterosis. Whaley (1950) found that the maize hybrids have more efficient protoplasm and more green and dry weight than the inbreds.

Cytoplasm is a limpid fluid rich in RNA and mitochondria which is usually transmitted through the female parent to the offspring. A number of evidences are now available to indicate the interaction of nuclear genes and cytoplasm in the production of phenotype of the individual.

Heterosis is generally expressed as an increase in the yields of hybrids. Increased  in yield can be measured in terms of grain, seed, fruit, tuber or the whole plant.

Heterosis results in more vigorous growth which ultimately leads to healthier and faster growing plants with increase in size than the parents.

In many cases, hybrids show improved quality. This may or may not be accompanied by higher yields. For example: many hybrids in onion show better keeping quality but not yield.

The hybrids exhibiting heterosis show an increase in fertility or reproductive ability. For example: tuber in potato (Solanum tuberosum), Stem in sugarcane etc.

Hybrids are generally more adapted to environmental changes than inbreeds. In fact, it is one of the physiological explanations offered for heterosis.

In some cases, hybrids show a faster growth rate than their parents, but that does not always produce larger plant size than the parents.

Some hybrids are known to exhibit a greater resistant to insects  or diseases than their parents.

The utilization of hybrid vigour on commercial scale requires the production of hybrid seeds in efficient quantity to meet the demand of farmers.

This is an official account of this website. This ID holds articles from two categories. 1. Articles from our non-authors. 2. Articles of the authors whose IDs were deleted.
Previous গাছকে আমরা কতটুকু জানি ?
Next Alkaloids: A Secondary Metabolite