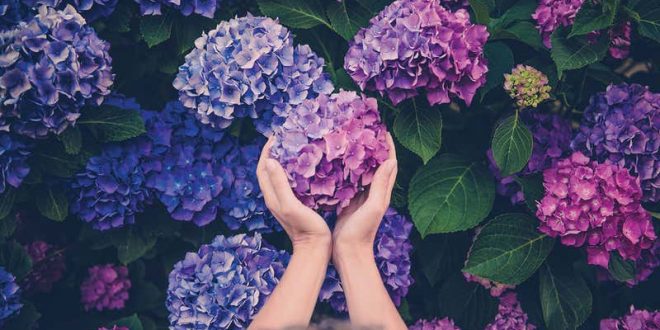 Hydrangea: A Natural Acid Base Indicator & Wonder of Colors

Hydrangea is one of the world’s most popular ornamental flowers that conceals a bouquet of biological and biochemical surprises. The iconic “snowball” shaped blooms of Hydrangea macrophylla show magical color variation from soil to soil.

In this article, incredibly interesting facts about the natural pH indication and color variation of Hydrangea (mainly Hydrangea macrophylla) will be discussed explicitly.

Hydrangeas are ubiquitous— but they are not what they seem. For starters, the bloom of the hydrangea is not a true flower, but an inflorescence: Sepals, or modified leaves, make up most of the bloom and overshadow the small, almost unnoticeable fertile floral portions at the center.

The bloom colors are what really make the hydrangea stand out: They range from pink to blue, including all shades of color. Only yellow and orange remain absent.

Hydrangea blooms possess blue sepals when the shrub grows in acidic soil, but develop red or pink sepals when grown in neutral to basic soils. This means that Hydrangea’s bloom color acts as a natural pH indicator for the soil. In fact, a hydrangea can have different bloom colors on the same bush if the roots of the plant sample soils of differing pH.

The Metal Key of Color Variation

Soil acidity actually is not the underlying chemical mechanism behind the color change of Hydrangea sepals. It ultimately depends on the availability of aluminum ions (Al3+) within the soil. In acidic soil, Aluminum ions are mobile and reacts with the readily available ions so that it can be taken up into the hydrangea bloom to interact with the red pigment. But in neutral to basic soil, the aluminium ions combine with hydroxide ions (OH–) to form immobile aluminum hydroxide, Al(OH)3.

So, for the bluing of hydrangea blooms, one needs both aluminum ions and acidic soil. The best soil additive for bluing is one that contributes both, e.g. commercially available aluminum sulfate, Al2(SO4)3. Oppositely, addition of lime  (calcium hydroxide, Ca(OH)2) changes the bloom-color from blue to red.

However, such imposed red-to-blue or blue-to-red color changes do not happen instantaneously; it often takes one or two growing seasons to instill the desired color.

Thus, it’s all about the availability of aluminum ions in the soil for the color conversion of hydrangea blooms. Soil pH is just a necessary facilitator for  aluminum’s mobility and availability.

There are many plants that has flowers of different colors. This color difference usually occurs either because the underlying pigments are likewise different, or the proportion of pigments changes. But the hydrangea is unique in this case as it’s color comes from only a sole pigment, delphinidin-3-glucoside, which is in the Anthocyanin family.

Getting Al3+ into the plant and transporting it to the sepals is a major step in the bluing of Hydrangea sepals. In response to the stimulation of Al3+, the roots of the hydrangea secrete citric acid (C6H8O7). As a result, a solution of citrate ions (C6H5O73-) and citric acid is formed around the roots at relative concentrations that are specific to the soil pH. Al3+ then establishes a stable complex with the citrate ions, which is absorbable into the roots of the hydrangea. Thus, The plant transports Al3+ along with this citrate complex.

However, this citrate complex is crucial for not only the incorporation of Al3+ into the roots but also the constant circulation of Al3+ throughout the plant.

Surprisingly, it is possible to change a hydrangea’s color without affecting the soil chemistry at all.  The assimilation of Al3+ through the roots and subsequently transport to the sepals has been made possible by developing a spray that introduces Al3+ directly into the sepals. By dissolving appropriate amounts of Al3+ in a buffered citrate–citric acid solution, red sepals can be changed to blue in a period of several days.

This outcome gives further evidence that the bluing depends on the presence of Al3+ in the sepals. However, the reverse spray to change blue sepals back to red has proven to be a more challenging chemical problem. This is because, the Al3+-delphinidin complex, once formed, is difficult to break apart inside the plant.

The biochemistry of hydrangeas brings out the possibility of developing new colors  that can be potentially beautiful additions to the gardens.  The amount of delphinidin-3- glucoside in the sepals of Hydrangea varies from zero (for white cultivars) to greater than 700 micrograms. The concentration of pigment indicates the intensity of the coloration, not whether the color is red or blue.

To enhance the color brightness of Hydrangea sepals, a chemical approach was made by infusing magnesium ions (Mg2+) into the plant. Surprisingly, instead of intensifying the color,  Sepals with red, white, and blue colors were produced simultaneously on certain cultivars.

Another success is the yellowing of Hydrangea sepals. This mechanism is done with the infusion of the molybdate ion (MoO42-) through the cut stems of red blooms.  Hypothesis is given that the normally colorless MoO42- bonds with the same phosphate groups that usually anchor Al3+, creating a yellow phospho- molybdate entity giving yellow look of sepals.

However, Introduction of the molybdate ion into the hydrangea shrub through the soil has proven toxic to the plant. Long-term experiments are in progress to find a way.

Unique red-blue patterns on hydrangea sepals has been done by controlled aluminum diffusion through cut stems and by direct sprayings onto blooms. It’s quite interesting that the rapid forcing of aluminum into the initially red sepals quickly generates unusual and novel patterns of red and blue.

A sweet tea named Amacha tea is made from the fermented leaves of Hydrangea macrophylla. This tea is used in the prevention of gum disease and  credited with antiallergic properties. Besides, Hydrangic acid from the leaves is being investigated as a possible anti-diabetic drug as it significantly lowered blood glucose, triglyceride, and free fatty acid levels in lab animals.

There is still much to learn about natural changes in the color in hydrangea blooms. By considering the coloring of Hydrangea, it is visible that metal ions as well as pH play a key role to create designer colors for flowers. Yet when it comes to hydrangea colors, there are always more chemical mysteries awaiting a solution.

Currently in 2nd year at Department of Botany, University of Dhaka. Curious about the vast Plant science world & wants to contribute some fruitful contents to Plantlet.
Previous Forest Ecology and Classification
Next Carbohydrates: The Central to Nutrition 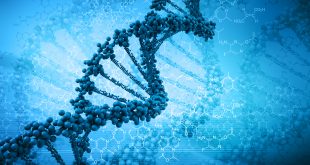 In a Museum when you see a glittering crystal, you would say it was a …

Try to add FAQ section and At A Glance in your well organized article.