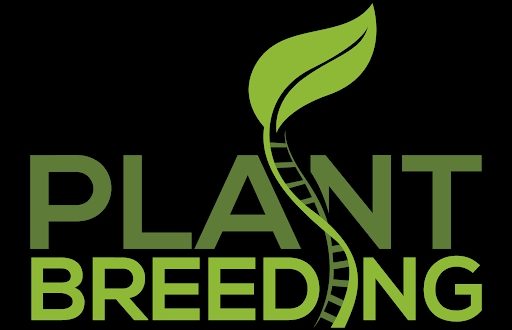 Plant breeding is an art or a science? 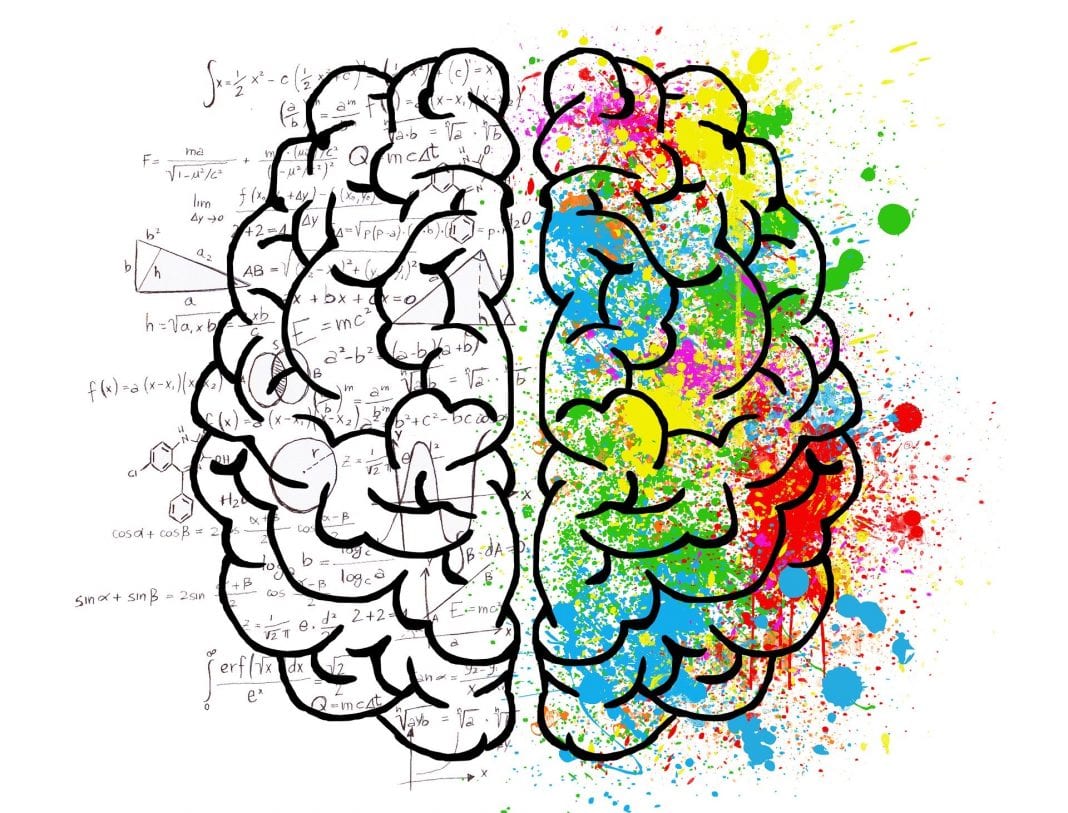 Whether plant breeding is an art or a science is hardly a point of dispute anymore.

In prehistoric times, people were either hunters or gatherers. In the Broadway musical Oklahoma, settlers were either farmers or plowmen. In most of Western civilization, people tend to have either a scientific or artistic perspective on life. The scientist-types look for order, seek structure in their lives and abide by the rules. Artists, well, not so much. They tend to more often want to color outside the lines and are less distressed by chaos. Plant breeders are a mix of both types, with the trend gradually shifting toward the scientific side. “Increasingly, as we are applying more genomic tools, we are applying more science, so I would say the pendulum is definitely swinging to a higher and higher percentage of science,” explains Allan Fritz, a wheat breeder at Kansas State University. “But there is still an element of art that is in play.” “There are those who want to be 100% art-driven and they may be missing out on some of the plant breeding tools and technologies that are available,” Morano says. “And then there are those that say the tools can do the whole job. I think that is a misconception. Every breeder evaluates plants a little differently and sees things from a different perspective. But, there appears to be a trend toward higher levels of dependence on science.” “Breeding is in a state of transition. There are certainly elements of art there. We don’t have the capacity to genotype a million plants in our segregation populations in our early generations, so when we are making selections on these, we are still making a lot of judgment calls that are some combination of art and science. There is still a critical need to be in the field and be observational, but we apply the tools of science to drive the genetic gain to make us more efficient in our selection practices,” Fritz says. 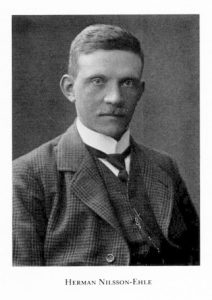 Swedish plant breeder, Nilsson-Ehle realized the fundamental importance of Mendel’s principles of heredity. Nilsson-Ehle was the first to demonstrate that economically important properties in cultivated plants are inherited according to Mendal’s laws. He profounded the multiple gene hypothesis to explain the genetic mechanism of quantitative inheritance.

Nikolai Ivanovich Vavilov was  prominent Russian and Soviet agronomist, botanist and geneticist  best known for having identified the centers of origin of cultivated plants. He was famous for his classical work ‘The centre of cultivated plants’ published in 1926.

Over a research career devoted to the genetics of resistance and the breeding and improvement of cereal grains, Fred N. Briggs earned himself a reputation as a pioneer in the application of genetics to crop improvement. This status is due in large part to his development and advancement of a breeding technique that has been called one of the significant plant breeding developments of the 20th Century.

Honored for his research on induced mutations in rice genetics, J. Neil Rutger was very successful in developing high yielding, semi-dwarf rice cultivars and valuable germplasm lines.  In his research, he developed methods of asexual seed production in rice (apomixis) and searched for transposable genetics elements to use as “tags” for cloning genes whose primary products were unknown.

Breeding  is nothing more nor less than directed evolution under artificial selection. Significant progress has been made in conventional breeding methods by utilizing desirable genetic variations. Semi-dwarfness was bred into modern rice and wheat varieties, leading to high-yield and lodging-resistant varieties; maize was biofortified with increased beta-carotene; the non-ripening tomato was developed with extended shelf-life. These agronomically desirable traits revolutionized our food production but the alleles underlying them were identified later.Advances in genetics, cell and molecular biology, particularly recombinant-DNA technology, In Vitro Techniques, polyploidy, Mutation breeding provide new opportunities for manipulation of the genome. Therefore, the new plant technologies will have a significant impact on expanding and diversifying the gene pool of crop plants, introducing specific genes and shortening the time required for the production of new varieties and hybrids. 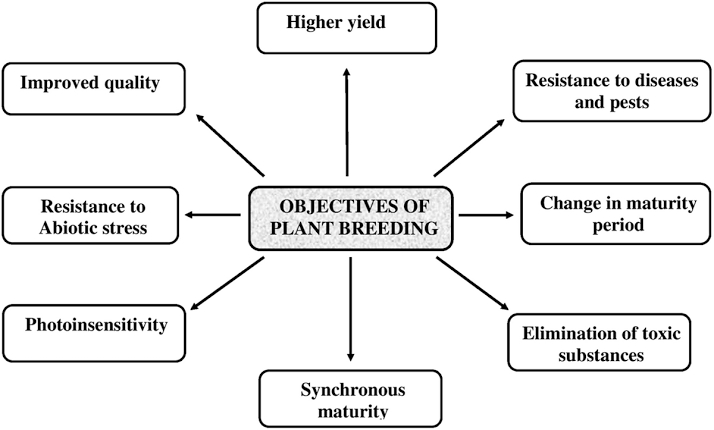 1. Higher yield: The ultimate aim of plant breedingis to improve the yield of “economic produce on economic part”. It may be grain yield, fodder yield, fibre yield, tuber yield, cane yield or oil yield depending upon the crop species.

4. Biotic resistance: Crop plants are attacked by various diseases and insects, resulting in considerable yield losses. Genetic resistance is the cheapest and the best method of minimizing such losses. Resistant varieties are developed through the use of resistant donor parents available in the gene pool.

5. Change in maturity Duration: Earliness is the most desirable character which has several advantages.  It requires less crop management period, less insecticidal sprays, permits new crop rotations and often extends the crop area. Maturity has been reduced from 270 days to 170 days in cotton, from 270 days to 120 days in pigeonpea, from 360 days to 270 days in sugarcane.

7. Synchronous Maturity: It refers to maturity of a crop species at one time. The character is highly desirable in crops like geengram, cowpea, castor and cotton where several pickings are required for crop harvest.

8. Wider adaptability: Adaptability refers to  suitability   of a variety for general cultivation over a wide range of environmental conditions. Adaptability is an important objective in plant breeding because it helps in stabilizing the crop production over regions and seasons.

9. Elimination of Toxic Substances: It is essential to develop varieties free from toxic compounds in some crops to make them safe for human consumption. For example, removal of neurotoxin in Khesari – lentil (Lathyruys sativus) which leads to paralysis of lower limbs, erucic acid from Brassica which is harmful for human health.

Plant breeding has several useful applications in the improvement of crop plants. However, it has five main undesirable effects on crop plants.

3. Danger of Uniformity :  Most of the improved varieties have some common parents in the pedigree which may cause danger of uniformity.

From times immemorial, the plant breeding has been helping the mankind. With knowledge of classical genetics, number of varieties have been evolved in different crop plants.

Since the population is increasing at an alarming rate, there is need to strengthened the food production which is serious challenge to those scientists concerned with agriculture. Advances in molecular biology have sharpened the tools of the breeders, and brighten the prospects of confidence to serve the humanity. The application of biotechnology to field crop has already led to the field testing of genetically modified crop plants. Genetically engineered rice, maize,soybean, cotton, oilseeds rape, sugar beet and alfalfa cultivars are expected to be commercialized before the close of 20th century. Genes from varied organisms may be expected to boost he performance of crops especially with regard to their resistance to biotic and abiotic stresses.

In addition, crop plants are likely to be cultivated for recovery of valuable compounds like
pharmaceuticals produced by genes introduced into them through gnetic engineering. It may be pointed out that in Europe hirudin, an anti-thrombin protein is already being produced from transgenic Brassica napus.

This is an official account of this website. This ID holds articles from two categories. 1. Articles from our non-authors. 2. Articles of the authors whose IDs were deleted.
Previous Biodiversity Loss & Conservation : Conservation and its Types
Next Mycoplasma: The Simplest Prokaryotic Cell

Though somewhat long in size, but I found this article so much comfortable to read out till the end. It will be a matter of ease for beginners. Thank you.

Thanks for your appreciation and kind words.