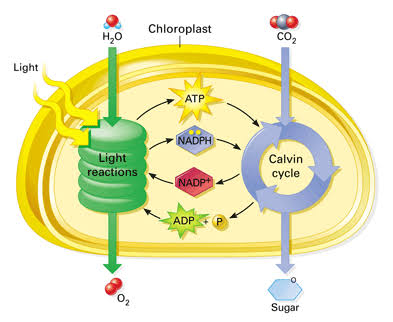 There are three pathway of carbon reduction, which are recognized-

The Calvin cycle (also known as the Benson- Calvin cycle ) is a set of chemical reactions that take place in chloroplasts during photosynthesis. The cycle is light-independent because it takes place after the energy has been captured from sunlight. This cycle is also known as C3 cycle. The Calvin cycle is named after Melvin Calvin, who won the 1961 Nobel Prize in Chemistry for finding it. Peanuts, cotton, sugar beets, tobacco, spinach, soybeans, and most trees are C3 plants. Most lawn grasses such as rye and fescue are C3 plants. C3 plants have the disadvantage that in hot dry conditions their photosynthetic efficiency suffers because of a process called photorespiration. 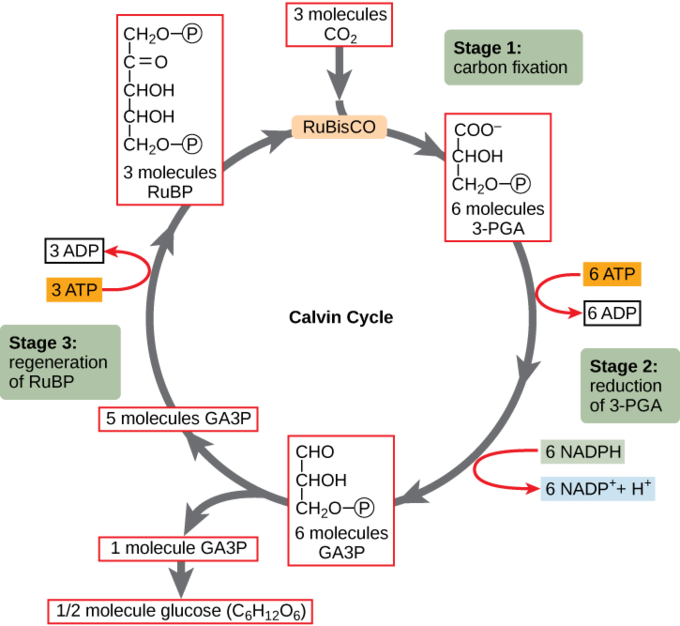 Rubisco: (ribulose bisphosphate carboxylase) A plant enzyme which catalyzes the fixing of atmospheric carbon dioxide during photosynthesis by catalyzing the reaction between carbon dioxide and RuBP.

Ribulose bisphosphate: An organic substance that is involved in photosynthesis, reacts with carbon dioxide to form 3-PGA.

The Calvin Cycle is the means by which plants assimilate carbon dioxide from the atmosphere, ultimately into glucose. Plants use two general strategies for doing so. The first is employed by plants called C3 plants (most plants) and it simply involves the pathway described above. Another class of plants, called C4 plants employ a novel strategy for concentrating the  CO2  prior to assimilation. C4 plants are generally found in hot, dry environments where conditions favor the wasteful photorespiration reactions of RUBISCO, as well as loss of water. In these plants, carbon dioxide is captured in special mesophyll cells first by phosphoenolpyruvate (PEP) to make oxaloacetate. The oxaloacetate is converted to malate and transported into bundle sheath cells where the carbon dioxide is released and it is captured by ribulose-1,5-bisphosphate, as in C3 plants and the Calvin Cycle proceeds from there. The advantage of this scheme is that it allows concentration of carbon dioxide while minimizing loss of water and photorespiration.

C4 plant is a plant that cycles carbon dioxide into four-carbon sugar compounds to enter into the Calvin cycle. These plants are very efficient in hot, dry climates and make a lot of energy. Many foods we eat are C4 plants, like corn, pineapple, and sugar cane. 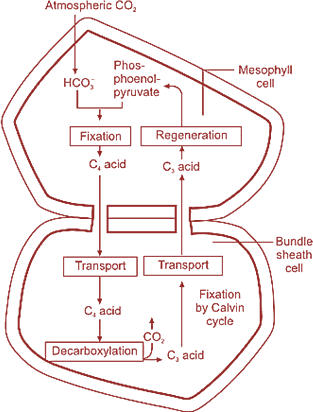 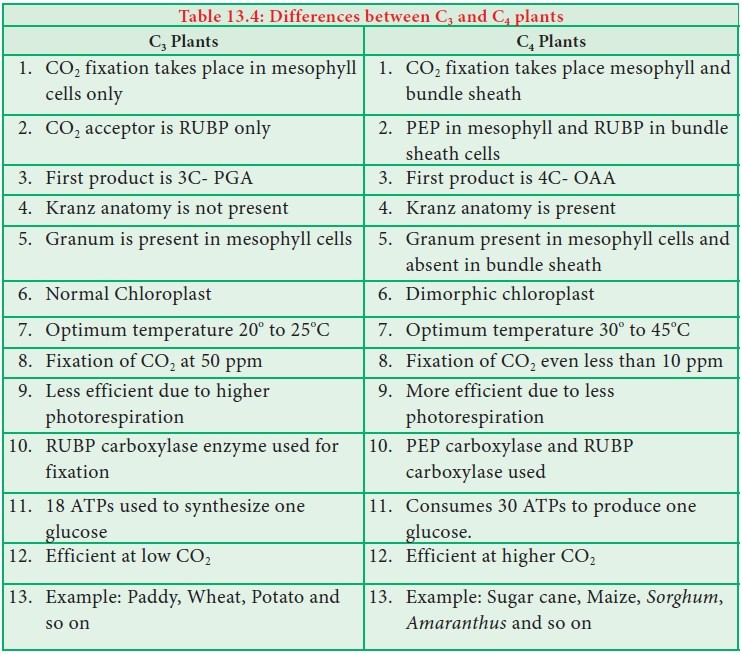 A carbon fixation pathway that evolved in some plants as an adaptation to arid conditions, in which the stomata in the leaves remain shut during the day to reduce evapotranspiration, but open at night to collect carbon dioxide (CO2 ).

Xerophytes, such as cacti and most succulents, also use phosphoenolpyruvate (PEP) carboxylase to capture carbon dioxide in a process called crassulacean acid metabolism (CAM). In contrast to C4 metabolism, which physically separates the CO2 fixation to PEP from the Calvin cycle, CAM temporally separates these two processes.

CAM plants: Some plants that are adapted to dry environments, such as cacti and pineapples, use the crassulacean acid metabolism (CAM) pathway to minimize photorespiration. This name comes from the family of plants, the Crassulaceae, in which scientists first discovered the pathway.

CAM plants have a different leaf anatomy from C3 plants, and fix the CO2 at night, when their stomata are open.

CAM plants store the CO2 mostly in the form of malic acid via carboxylation of phosphoenolpyruvate to oxaloacetate, which is then reduced to malate. Decarboxylation of malate during the day releases CO2 inside the leaves, thus allowing carbon fixation to 3-phosphoglycerate by RuBisCO. Sixteen thousand species of plants use CAM. 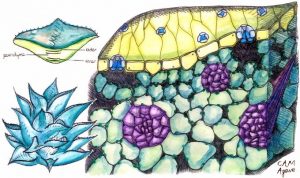 I am a student of Agricultural Biotechnology in Eskisehir, Turkey.I dream for a better and pollution free green Earth.
Previous Factors of Photosynthesis
Next Order of Gnetopsida