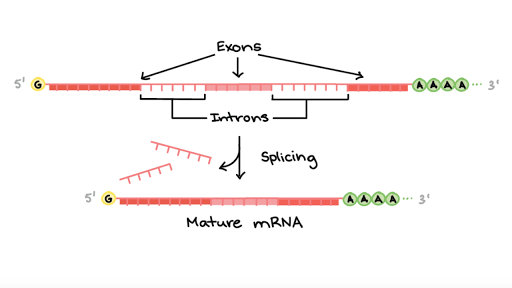 The process of transcription is very similar in prokaryotes and eukaryotes, but there are major differences in the relation between the transcript and the mRNA used for polypeptide synthesis in eukaryotes.

This conversion, which is called RNA processing, usually consists of two types of events:

Modification of the ends 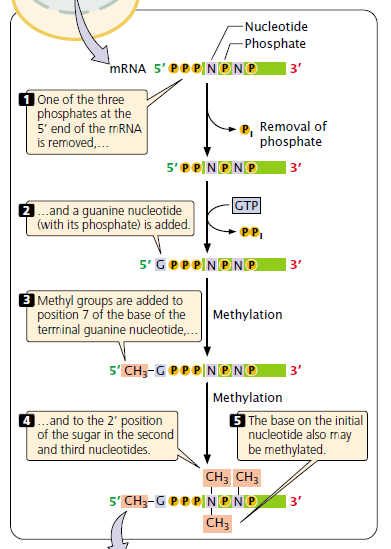 Each end of a eukaryotic transcript is processed. The 5′ end is altered by the addition of a modified guanosine, 7- methyl guanosine, in an uncommon 5′-to-5′ (instead of 3′-to-5′) linkage; this terminal group is called a cap.

So, for easy understanding:

Reason: The 5′ cap is necessary for the mRNA to bind with the ribosome to begin protein synthesis. Its presence also increases the stability of mRNA and influences the removal of introns. 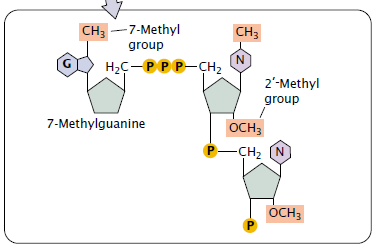 The Addition of the Poly A tail

The 3′ terminus of a eukaryotic mRNA molecule is usually modified by the addition of a polyadenosine sequence (the poly-A tail) of as many as 50 to 250 nucleotides. These nucleotides are not encoded in the DNA but are added after transcription in a process termed poly-adenylation.

At the cleavage site, as many as 250 nucleotides are added following a complex process with the help some factors. (Will not be discussed here)

Reason: The poly(A) tail confers stability on many mRNAs, increasing the time during which the mRNA remains intact and available for translation before it is degraded by cellular enzymes.

A second important feature peculiar to the primary transcript in eukaryotes is the presence of segments of RNA, called introns or intervening sequences, that are excised from the primary transcript. Accompanying the excision of introns is a rejoining of the coding segments (exons) to form the mRNA molecule. The excision of the introns and the joining of the exons is called RNA splicing.

Splicing occurs in the nucleus following transcription but before the RNA moves to the cytoplasm.

RNA splicing takes place in nuclear particles known as spliceosomes. These abundant particles are composed of protein and several types of specialized small nuclear RNA (snRNA) molecules ranging from 100 to 200 bases in length.

(This complex process will be followed by another article and after completion, it will be hyperlinked here)

Most introns appear to have no function in themselves. An artificial gene that lacks a particular intron usually functions normally. In those cases in which an intron seems to be required for function, it is usually not because the interruption of the gene is necessary, but because the intron happens to include certain nucleotide sequences that regulate the timing or tissue specificity of transcription. The implication is that many mutations in introns, including small deletions and insertions, should have essentially no effect on gene function, and this is the case.

Currently in 4th year (Hons) in the Department of Botany, University of Dhaka. Planned to have multiple careers one by one but promised to be with 'Plantlet' as long as it's primary stage remains unfinished. Email: abulaisshomrat@gmail.com. Minimum monthly resolution - Publish (1), Revise (3), Share (5)
Previous Genetic Code
Next Translation: mRNA to Protein