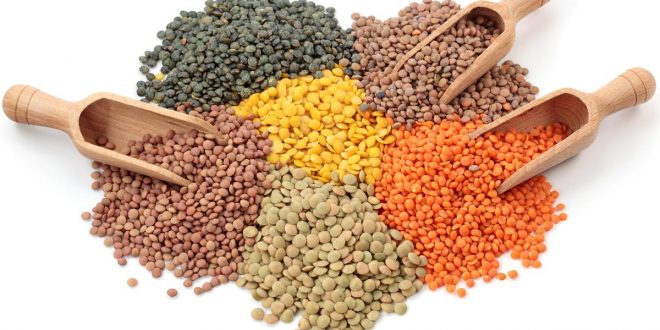 Pulses are dry, edible seeds of legumes belonging to the family Fabaceae.

In the past three decades, global pulse production has grown rapidly. In the past ten years alone, the world has produced between 50 and 60 million tons of pulses each year.

As of 2015, the world’s biggest producers of pulses were India, Canada, Myanmar, China, Nigeria, Brazil, Australia, USA, Russia, and Tanzania, while the world’s most important pulse exporters also include Argentina, France, Ethiopia, and Turkey.

• An annual much branched herb, with square stems, up to 75 cm tall.
• Lentil is one of the oldest pulse crops and of ancient cultivation in Western Asia, Egypt and Southern Europe. It is widely cultivated in temperate and subtropical regions and in the tropics of higher altitudes, especially in the Indian subcontinent.
• Lentils are considered to be the most easily digested of grain legumes.

• An erect or semi-erect, sometimes twining herbaceous annual, 25-130 cm tall.
• Originated in India or the India-Burmese region. It spread in early times to most other Asian countries and more recently in other continents.
• Despite its present wide distribution, mung bean never become a major commercial crop outside Asia.
• Mung bean has higher digestibility and causes less flatulence than most of the other pulses, making it suitable for children and older people.
• Mung protein is rich in lysine, making it an excellent complement to rice.
• Good source of minerals, pro-vitamin A and Vitamin B complex, whereas bean sprouts are rich in Ascorbic acid.

• Used as important and delicious pulse.
•Seeds or the flour is used for preparing a variety of dishes, such as soups, snacks, bread, noodles and even ice-cream.
• Mung bean starch is extensively used for starch noodles.
• Most popular as a fresh vegetable in Oriental cooking.
• Crop residues are used as useful fodder.

• An erect, hairy annual, 30-100 m tall, sometimes twinning. Stem diffusely branched from the base.
• A primary center of black gram is found in India and a secondary center in Central Asia. In South-east Asia, black gram is cultivated in northern Malaysia, Philippines, Thailand and Myanmar.
• Also cultivated in Bhutan, Nepal, Afghanistan, Kenya and United States.

• Used as a pulse, direct or in various preparation.
• Small amounts are used as cattle feed.
• It has some uses as a green manure and medicine

• A much branched annual with conspicuous glandular hairs. usually 20-60 (-100) cm tall.
• Originated in Turkey and reached the Indian subcontinent before 2000 BC. India, Pakistan, Ethiopia, Turkey and Mexico have the largest areas under cultivation.
• Turkey is the largest producer of Chickpea. In production, chickpea ranks as the 3rd non-oil seed grain legume in the world (First – Paseolus, Second – Pea).

• Chickpea is mainly recommended as a dry pulse.
• Green pods are eaten as snacks or vegetable.
• Seed husks are used to feed stock and poultry.

• An annual climbing herb, primitive forms up to 3.5 m tall. Modern cultivars as short as 30 cm.
• Probably originated in South-west Asia; now cultivated in many temperate countries, as a cool-season crop in the subtropics and at higher altitudes in the tropics.

• Dry seeds are used for food and feed. They are cooked whole, split or ground into flour, and boiled or roasted.
• Fresh peas are as major vegetable and they are canned or frozen, in the immature form.
• This is suitable as forage, hay and green manure too.

• A much branched, sub-erect, straggling or climbing annual with winged quadrangular stems, up to 90 cm tall.
• Native to southern Europe and Western Asia. Widely grown in Iran, Middle East, parts of Africa and south America, especially in India.

• Seeds are boiled and used as pulse .
• Seeds are ground in.to flour and used for making bread, paste balls and in curries.
• Young leaves and fruits are eaten as vegetable .
• Oil obtained from the seeds is medicinally used as a powerful cathartic.
• It is also cultivated as a forage crop and for green manure .
• People and livestock consuming grass pea as the principal article of diet for months long develop a paralytic disease called Lathyrism. The poison works in various parts of the central nervous system, especially in lower limbs. Seeds soaked in water for 24 hours before cooking are not toxic.

• A glandular pubescent, short-lived, perennial shrub, usually grown as annual, up to 4 m tall.
• Originated in India. It reached to Africa in 2000 BC or earlier, and found its way to the Americas with the conquest and slave trade, probably through both the Atlantic and the Pacific.
• Now grown all over the tropics and especially in India and sometimes in East Africa.

• Mainly used as a pulse.
• Fresh seeds and even pods are used as vegetable in spicy soups and other side dishes.
• Ripe seeds are eaten roasted too.
• Useful as a shade crop, cover crop or windbreak.
• Improve the soil by its extensive root system.
• Young leaf decoction is applied to sores and itches in Java.

Currently I am a student of B.S. Honors in Department of Botany, University of Dhaka. My first goal is to become a good human being and second one is to help those in need by any honest means. The rest is on Allah.
@asfiraian@gmail.com
Previous Japan as a Place for Higher Studies
Next Leaf Traces & Pit Pairs