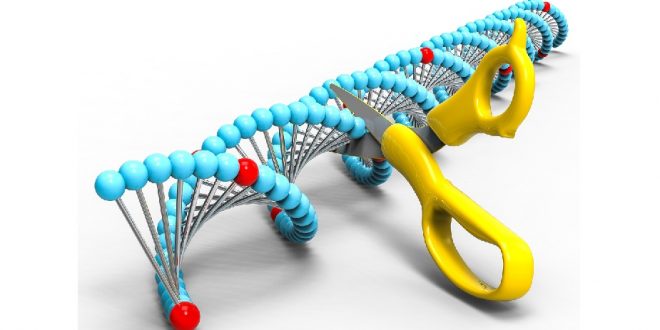 The  first step in sequencing a genome is to divide the individual chromosomes (in eukaryotes) or whole DNA (in prokaryotes) in an ordered manner into smaller and smaller pieces that ultimately can be sequenced. That is, one begins by creating a genomic library of fragmented DNA parts.

However, at some stage, the different clones (after cloning of the fragmented parts) have to be ordered into a physical map corresponding to that found in the intact organismal genome. The magnitude of this task depends on the average size of the cloned fragment: the larger the fragment, the fewer clones that have to be ordered.

The ability to clone, cut and sequence essentially any gene or other DNA sequence of interest from any species depends on a special class of enzymes called restriction endonucleases (from the Greek term éndon meaning “within”; endonucleases make internal cuts in DNA molecules).


How restriction enzymes are named?

The restriction endonucleases are named by using the first letter of the genus and the first two letters of the species that produces the enzyme. If an enzyme is produced only by a specific strain, a letter designating the strain is appended to the name. The first restriction enzyme identified from a bacterial strain is designated I, the second II, and so on.

How a bacterium protects its DNAs restriction sites from being cut by its own restriction enzyme?

All cleavage/restriction sites in the DNA of an organism must be protected from cleavage/cutting by the organism’s own restriction endonucleases; otherwise the organism would commit suicide by degrading its own DNA.

In many cases, this protection of endogenous cleavage sites is accomplished by methylation of one or more nucleotides in each nucleotide sequence that is recognized by the organism’s own restriction endonuclease. Methylation occurs rapidly after replication, catalyzed by site-specific methylases produced by the organism.

The Availability of Restriction Sites

Type II restriction endonucleases have target sites which are 4–8 bp (=base pairs) in length. If all bases i.e. A, T, C, G are equally frequent in a genome or DNA molecule, we would expect a tetranucleotide (a restriction site of 4 bp) to occur and cut the sequence on average every 44 (i.e. 256) nucleotide pairs in a long random DNA sequence. Similarly,

Remember, if restriction site is found after every ‘n’ number of base pairs, the length of the fragments would also be ‘n’ base pairs.

Table 1 shows the expected number of fragments that would be produced when different genomes are digested completely with different restriction endonucleases.

In practice, the actual number of fragments/restriction sites is quite different because the distribution of nucleotides is non-random and most organisms do not have an equal number of the four bases; e.g. human DNA has overall only 40% G + C, 60% A + T content and the frequency of the dinucleotide CpG is only 20% of that expected.

In addition, many cytosine residues are methylated and this can prevent restriction endonuclease digestion. Thus the enzyme NotI, for which the restriction site is GCGGCCGC (8 bp), cuts human DNA into fragments of average size 1000– 1500 kb rather than the 65 kb (28 = 65 536 bp) expected. Similarly, the Escherichia coli genome is cut by NotI into only 20 fragments, not the 72 expected from Table 1 (Smith et al. 1987).

Gelfand and Koonin (1997) have analysed those bacterial genomes that have been completely sequenced and have found that short palindromic sequences, like restriction endonuclease recognition sites, are low in number at a statistically significant level.

They suggest that in the course of evolution, bacterial DNA has been exposed to a wide spectrum of restriction enzymes, probably as a result of latent transfer mediated by mobile genetic elements.
0
Any thought on this? Help us with your feedback. x

The average size of DNA fragment produced by digestion with restriction enzymes with 4- and 6-base recognition sequences is too small to be of much use for preparing gene libraries except in special circumstances. Even enzymes with 8-base recognition sequences may not be of particular value because, although the average size of fragment should be 65.5 kb, in the case of S. pombe, in practice the fragments range in size from 4.5 kb to 3.5 Mb (Fan et al. 1989).

If more uniform-sized fragments are required, it is usual to partially digest the target DNA with an enzyme with a 4-base recognition sequence. The partial digest then can be fractionated to separate out fragments of the desired size. Because the DNA is randomly fragmented there will be no exclusion of any sequence. Furthermore, clones will overlap one another (Fig. 2) and this is particularly important when trying to order different clones into a map.

Some introns encode endonucleases that are site specific and have 18–30 bp recognition sequences (Dujon et al. 1989). These endonucleases can be used to produce a very limited number of fragments, some or all of which are produced by cleavage within related genes.

Currently in 4th year (Hons) in the Department of Botany, University of Dhaka. Planned to have multiple careers one by one but promised to be with 'Plantlet' as long as it's primary stage remains unfinished. Email: abulaisshomrat@gmail.com. Minimum monthly resolution - Publish (1), Revise (3), Share (5)
Previous Organization of Nuclear DNA in Eukaryotes
Next Endoplasmic Reticulum: Discovery, Structure, & Function