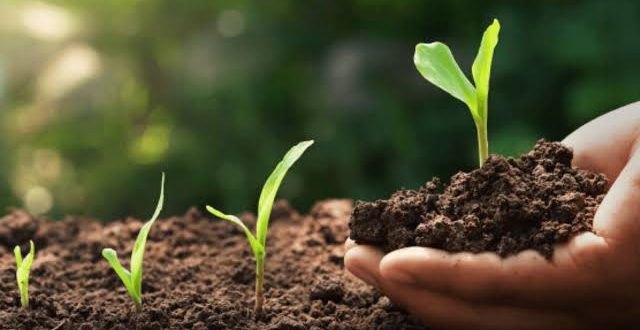 With the upward and advancement of human civilization,  people gradually discovered co-relations and importance of various materials of environment.  To have much more control, flexibility and also from the inborn curiosity, scientists work/ed years after years to find out the relationship among the materials  of environment.

In such a way, soil was also been brought under observations and found many informations that benefited human civilization. One of the most important facts of those observations is the formation of soil.

In this article, the factors of the environment responsible for the formation of the soil is being discussed.

In 1960, Kellogg gave a broad definition of soil that covered almost all the major factors of soil formation, “Soil is the collection of natural bodies occupying portions of the earth’s surface that support plants and that have properties due to the integrated effect of climate and living matter, acting upon parent material, as conditioned by relief, over periods of time (Hartemink, 2016).”

Actually this definition was influenced from the Jenny’s equation.

In 1941, Hans Jenny showed that soil formation is the fuction of several

factors that can be exhibited through an equation.

And (….) stands for un specified factors.

These factors- responsible for the formation of soil, are distributed into two groups.

Factors those supply energy that acts on the mass for the purpose of soil formation are called active soil forming factors.

Parent material, topography and time are the passive factors.

All the soil forming factors are discussed below briefly.

Climate is the average weather of a place for a long period of time (more than 20 or 30 years). It is said to be the most powerful factor of soil formation. There are some variables to measure the climate of a place. They are temperature, humidity, atmospheric pressure, wind, and precipitation. All these variables have bold impact on the development/ formation of soil.

and soil properties leaching (draining away from soil.)

The amount, intensity, timing and daily changes in the temperature affect  the speed of chemical reactions. The warmer the temperature, the faster reactions occur. Because of temperature fluctuations, physical weathering of rocks increased. It also affect the moisture effectiveness. 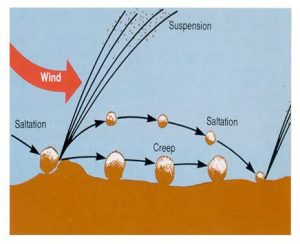 Any liquid or frozen water eg: rain/sleet that forms in the atmosphere and falls back to the Earth, is called Precipitation. It is a very important factor in soil development.

The active components of soil forming factors are plants, animals, micro-organisms and man.

The character and chemical composition of the parent material plays an important role in determining soil properties, espeically during the early stages of development.

Parent material- rich in soluble ions like Ca, Mg, K, Na etc. are easily dissolved in soil water and made available to plants. If parent materials are low in soluble ions, water moving through the soil removes the bases and substitutes them with hydrogen ions making the soil acidic and unsuitable for agriculture.

The relief or topography denotes to the arrangement or configuration of a an area on the land surface e.g. hill, mountain. It refers to the differences of the height on a broad scale in comparison with the land surface.

There are two main features of topography that affect the soil formation- Slope and aspect.

Slope: The rise or fall of the land surface is called slope. When the soil is steep (rising or falling sharply,  almost 90° angle), it can be eroded easily and loss the topsoil. As a result, it becomes thinner. Level soil is better in this perspective.

Aspect: Aspect is the direction of the slope faces relative to the Sun. If the aspect is to the Sun, the soil will face high temperature that causes water loss from the soil. 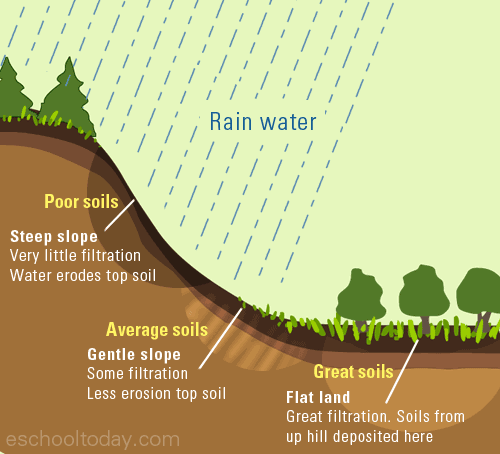 Time is also a component for the other factors to interact with the soil. Over time, soil exhibit features that reflect the other forming factors. Soil formation processes are continuous. It takes hundreds of years to develop an inch of soil. Recently deposited material, such as the deposition from a flood, exhibits no features from soil development activities. Terraces above the active floodplain, while similar to the flood plain, are older land surfaces and exhibit more development features. 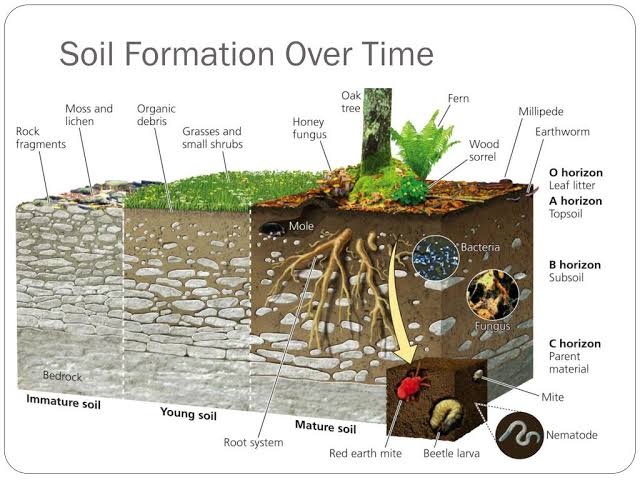 4. Fundamentals of soil science- Forth HD