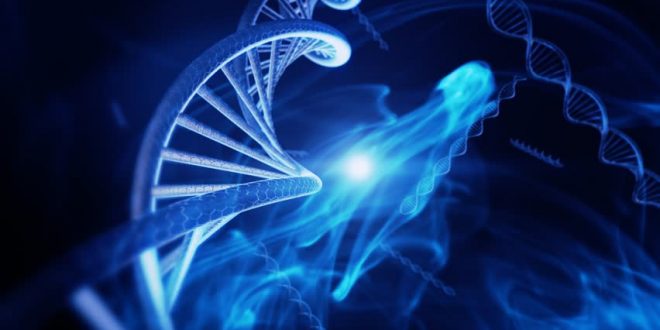 The Structure Of DNA and RNA

One of the features of the ‘genetic molecule’ would have to be the ability to carry instructions – a sort of blueprint – for the construction and behavior of cells and the way in which they grow together to form a complete living organism. Another would be the ability to be copied perfectly, over and over again, so that whenever the nucleus of a cell divides it can pass on an exact copy of each ‘genetic molecule’ to the nuclei of each of its daughter cells.

Until the mid 1940s, biologists assumed that such a molecule must be a protein. Only proteins were thought to be complex enough to be able to carry the huge number of instructions which would be necessary to make such a complicated structure as a living organism. But during the 1940s and 1950s, a variety of evidence came to light that proved beyond doubt that the genetic molecule was not a protein at all, but DNA.

The Structure Of DNA and RNA

Nucleotides are made up of three smaller components. These are:

There are just five different nitrogen-containing bases found in DNA and RNA. In a DNA molecule, there are four: adenine, thymine, guanine and cytosine. An RNA molecule also contains four bases, but never the base thymine. Instead, RNA molecules contain a base called uracil. These bases are often referred to by their first letters: A, T, C, G and U. The pentose (5-carbon) sugar can be either ribose (in RNA) or deoxyribose (in DNA). As their names suggest, deoxyribose is almost the same as ribose, except that it has one fewer oxygen atoms in its molecule. Figure (A) shows the five different nucleotides from which DNA and RNA molecules can be built up. Figure(B) shows the structure of their components in more detail; you do not need to remember these structures, but if you enjoy biochemistry you may find them interesting.

Although ATP is not part of DNA or RNA, we will look at its structure here because it is very similiar to a nucleotide. Its structure is shown in Figure (C) Adenosine can be combined with one, two or three phosphate groups to give, in turn, adenosine monophosphate (AMP), adenosine diphosphate (ADP) or adenosine triphosphate (ATP).

To form the polynucleotides DNA and RNA, many nucleotides are linked together into a long chain. This takes place inside the nucleus, during interphase of the cell cycle.

Figure (D.a) shows the structure of part of a polynucleotide strand. In both DNA and RNA it is formed of alternating sugars and phosphates linked together, with the bases projecting sideways.
The covalent sugar–phosphate bonds (phosphodiester bonds) link the 5-carbon of one sugar molecule and the 3-carbon of the next. The polynucleotide strand is said to have 3΄ and 5΄ ends.

DNA molecules are made of two polynucleotide strands lying side by side, running in opposite directions. The strands are said to be antiparallel. The two strands are held together by hydrogen bonds between the bases (Figure (D.b) and (D.c). The way the two strands line up is very precise. The bases can be purines or pyrimidines. From Figure (B), you will see that the two purine bases, adenine and guanine, are larger molecules than the two pyrimidines, cytosine and thymine. In a DNA molecule, there is just enough room between the two sugar– phosphate backbones for one purine and one pyrimidine molecule, so a purine in one strand must always be opposite a pyrimidine in the other. In fact, the pairing of the bases is even more precise than this. Adenine always pairs with thymine, while cytosine always pairs with guanine: A with T, C with G. This complementary base pairing is a very important feature of polynucleotides, as you will see later.

DNA is often described as a double helix. This refers to the three-dimensional shape that DNA molecules form (Figure (D.d). The hydrogen bonds linking the bases, and therefore holding the two strands together, can be broken relatively easily. This happens during DNA replication (DNA copying) and also during protein synthesis (protein manufacture). As we shall see, the breaking of the hydrogen bonds is a very important feature of the DNA molecule that enables it to perform its role in the cell. 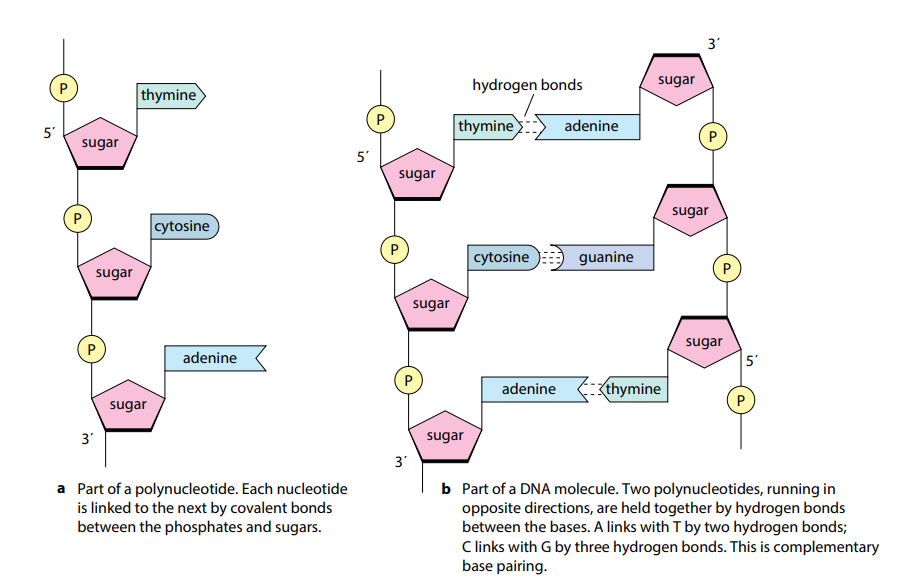 DNA molecules can be enormous. The bacterium E. coli has just one DNA molecule, which is four million base pairs long. There is enough information to code for several thousand proteins. The total DNA of a human cell is estimated to be about 3 × 109 base pairs long. However, it is thought that only 3% of this DNA actually codes for protein. The function of much of the remainder is uncertain.

An Example Of Mutation

One mutation that has a significant effect is the one involved in the inherited blood disorder sickle cell anaemia.

Hemoglobin is the red pigment in red blood cells which carries oxygen around the body. A hemoglobin molecule is made up of four polypeptide chains, each with one iron-containing haem group in the center. Two of these polypeptide chains are called α chains, and the other two β chains. 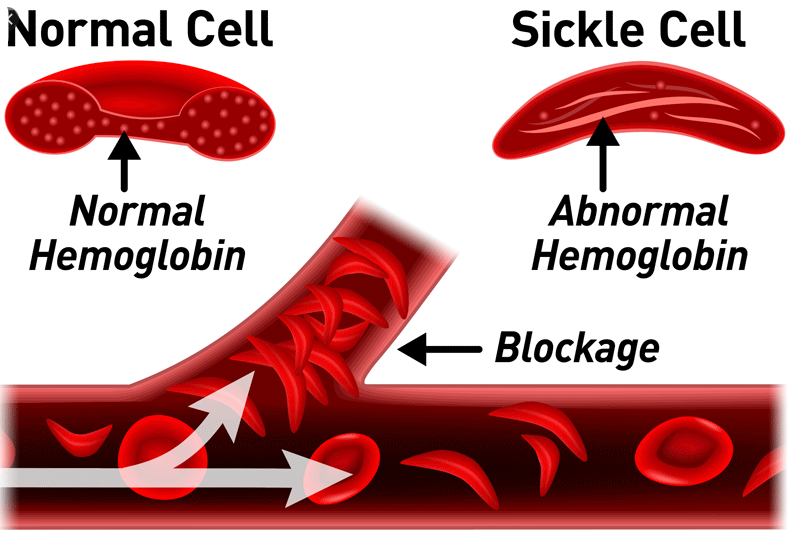 This is coded from the HbA (normal) allele of the gene. But in some people, the base sequence CTT is replaced by CAT, and the amino acid sequence becomes:
Val–His–Leu–Thr–Pro–Val–Glu–Lys

This type of mutation is called a substitution. In this case, the small difference in the amino acid sequence results in the genetic disease sickle cell anaemia in individuals with two copies of the HbS allele.

The layout of the article seems good and catchy.

Bhai All the images that is is used is the screen shots of Various books. At the end of the Article I give the reference of those books Bhai.

Okay. Just update your profile then.