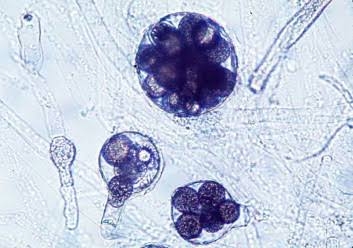 Oomycota: The organisms of Oomycota are not fungi in other words, they are Pseudofungi. They have been recognized as being notably different from the organisms included in the phylum Fungi for a long. As an illustration, in the classical concept, Oomycota species were allied with certain algae. However, because of a number of factors & tradition as well as practical considerations, there has been a tendency to classify Oomycota with true fungi.

Oomycetes the class of inclusive, filamentous microorganisms that include some of the biggest threats to global food security with the most devastating plant pathogens.

These are also known as “water molds”. The 500 or so species include both parasites and saprobes.

Oomycetes can reproduce both sexually and asexually.

Class Oomycetes is divided into five orders & three families. These are:

A girl with a lot of dreams to accomplish and make her parents proud. Currently studying in 1st year of B.Sc in University of Dhaka. Want to walk with Plantlet a long way. Interested with debate, music, photography and poem recitation. Email: syedanusratbd@gmail.com Minimum Monthly resolution: Publish (1), Revise(1), Share (1)
Previous Mucorales: The Largest Order of Zygomycetes
Next Protected areas of Bangladesh

So much impressive yo.