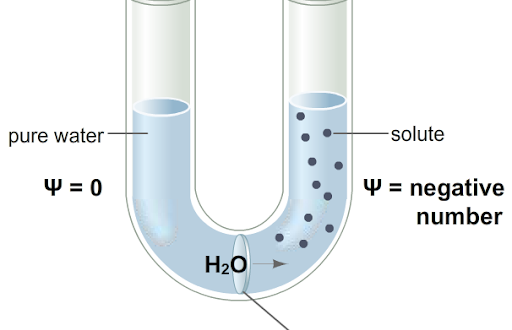 According to thermodynamic laws every component of a system possesses free energy capable of doing work under constant temperature conditions. Osmotic movement…….

In an open osmotic system, the water potential and the osmotic potential values are numerically similar and also have same sign i.e. negative (similar will be the case of plasmolysed cells). On the other hand, in a closed osmotic system e.g. plant cells a pressure is imposed on water which increases the water potential. In plants, the pressure is called turgor pressure. This is the actual pressure with positive sign and ranges between zero and numerical osmotic potential value. The potential created by such pressures is called hydrostatic pressure or pressure potential (Ψp). Thus, Ψw = Ψp + Ψπ.

For 1.0 molal glucose solution at 30 degree celcius and 0 degree celcius, find the osmotic potentials and comment on the relation between temp. and solute potential and find the direction of flow of glucose. (Salisbury pg: 49)

Water is almost incompressible. So, its concentration remains nearly constant. Thus a model based strictly upon water concentration will not explain diffusion of water in plants. Indeed differences in water potential can readily be ignored.

Actually temp differences are usually ignored in soil-plant-air continuum as we assume temp. to be constant throughout the system and the environment. But this isn’t applicable for plants like growing in tundra region.

Increasing the pressure increases the free energy and hence the chemical potential in a system.

If pressure is applied to the solution on one side of the membrane but not to the other, the water potential of the pressurized side will be increased; there will then be a net movement of water molecules by diffusion through the membrane and into the compartment of lower pressure.

This is extremely important in studying plants because the contents in most plant cells are under pressure compared with their surroundings, and because fluids in the xylem can be under tension (negative pressure).

Effects of solutes on solvent chemical potential or just solutes

Currently in 4th year (Hons) in the Department of Botany, University of Dhaka. Planned to have multiple careers one by one but promised to be with 'Plantlet' as long as it's primary stage remains unfinished. Email: abulaisshomrat@gmail.com. Minimum monthly resolution - Publish (1), Revise (3), Share (5)
Previous Solution Types, Plasmolysis and Imbibition
Next Monocotylidonous Family: Poaceae