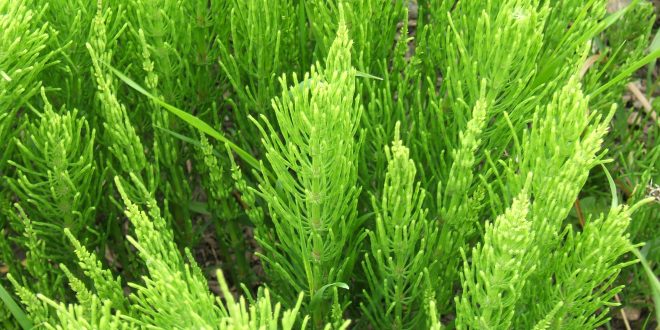 Equisetum commonly known as ‘Horsetails’ or ‘Scouring rushes’. It comprises about 25 species and is worldwide in distribution. Except This genus in vascular plants, there is no living genus in Equisetaceae family that reproduces by spores rather than seeds.

The majority of the species are small around 15 ∼ 60 cm in height and 2.0 cm in diameter. It can grow in a wide variety of habitats and absorbs silica. Some species grow in damps and shaded places, others grow in ponds and marshes or in sandy soil, near the banks of rivers, etc. Some of the common species of Equisetum are- E. debile, E. arvense, E. elongatum etc.
The aerial part is herbaceous and usually annual. Though some species are thin (0.5∼2.0 cm) They can be tall in heights [e.g., E. giganteum (13 m), E. telmateia (2 m); E. ramosissimum (4 m). Some of them live as a climber.  According to Encyclopedia of Flora and Fauna of Bangladesh, only two members of Equisetum (i.e., E. Diffusum , E. Ramosissium subsp. Debile) are enlisted.

In this section, we will discuss about the internal morphology of the plant body.

According to their mode of reproduction are mainly 3 types:

By means of tubers. Ovoid shaped tuber found in E. arvense and pear-shaped in E. telmateia.

Equisetum carry out the asexul reproduction by spores. These spores are produced from cone or sporangiferous spike. The strobilus are formed 0n the chloro­phyllous vegetative shoot.

During Equisetum’s gametophytic stage, There are male sex organs antheridium and female sex organ archegonium produced. Equisetum usually has both male and female sex organs (Bisexual). But, some unisexual members are also present in this genus. After maturation of the archegonium and antheridium fertilization happens.  As the motile antherozoides have to swim to reach to the archegonia, water is essential for fertilisation. As a result, newly formed embryo will start a new sporophytic generation.

This is an official account of this website. This ID holds articles from two categories. 1. Articles from our non-authors. 2. Articles of the authors whose IDs were deleted.
Previous Types & Procedures of Selection Process (Part-2)
Next Aquatic Angiosperm: Water Finery