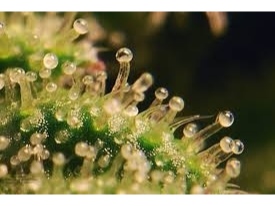 In this article,  these external structures of  plant will be discussed briefly.

In some leaves and flowers, more or less large areas of the epidermis is glandular or glandular epidermis covers emergences such as the shaggy hairs of Nerium or the epidermal cells give rise to trichomes of various degree of complexity.

The more complex secretory structure may be called gland but no sharp division exists between glandular hairs and glands. The simple trichomes derived entirely from the epidermis with emergences.

Hydathodes are structures that discharge water from the interior of the leaf to its surface, a processes commonly called guttation (Kramer, 1945).

The guttation water contains various salts, sugars and others organic substances and sometimes glutamine after the plants are fertilized with ammonium sulphite. Guttation may cause injury to plants through accumulation and concentration of guttation products or through interaction of the guttation water with pesticides (Ivanoff, 1962).

Although the hydathodes are usually treated with the secondary structures, one of the common types of hydathodes possesses no tissue that is exactly comparable with the glandular tissue of the true secretory organs.

The epidermis has opening over the epithem which often appear as incompletely differentiated stomata lacking the mechanism for opening and closing. Each hydathode may have one (Aconitum) or more than one pore (Compositae). In Equisetum, the epithem occurs on one side of the vascular bundle. The epithem may be closed by suberized cells or by cells having casparian strips.

The fragrance of flower is commonly produced by volatile substances mainly essential oils distributed throughout the epidermis of perianth parts (Weichel, 1956). In some plants, however, the fragrance originates from special glands named osmophores by Vogel (1962). Osmophores are found in Asclepiadaceae, Aristolochiaceae, Araceae, Burmaniaceae, Orchidaceae.

Various floral parts may be differentiated as osmophores and they may assume the form of flaps, cilia or brushes. The prolongation of the spadix of the Araceae and the insect-attracting tissue in the flowers of Orchidaceae are osmophores.

Osmophores can be stained with neutral red and thus can be identified from the neighbouring cells. The osmophores have a secretory tissue usually several layers in depth. The emission of the volatile secretions is of short duration and is associated with a utilization of large amounts of storage products. The tissue may be compact and vascularized or it may be permeated by intercellular space. The oil usually vaporizes immediately but it also may appear in droplets.

The occurrence of floral and extra-floral nectaries in dicot and monocot plants is given as follows:

In the Tiliales, the nectaries consists of multicellular glandular hairs. These hairs packed close to each other (together) and form a cushion like growth. This type of nectaries occur on various flower parts (sepals). Floral and extra-floral nectaries produce liquid containing sugar.

Nectaries frequently occur in the partitions or septae of the ovaries, septal nectaries. These nectaries have the structure of pockets with a glandular lining and arise in parts of the ovary where the carpel walls are incompletely fused. If they are deeply embedded in the ovary, they have outlets in the form of canals leading to the surface of the ovary.

However, the secretory tissue of the nectary may be restricted to the epidermal layer. In many nectaries the cells beneath the epidermis are also secretory. The sugar of the nectaries (floral or extra-floral) is derived from phloem.